The latest version of the House Republican bill to repeal the Affordable Care Act (ACA) would gut protections for people with pre-existing conditions, while making no changes to address the flaws in the underlying bill, we explained yesterday. Here are some key graphs and resources that highlight how the House bill would hurt coverage and affordability for millions of Americans:

[T]he House bill, if enacted, would represent the greatest assault on low- and moderate-income Americans of any law in modern times. 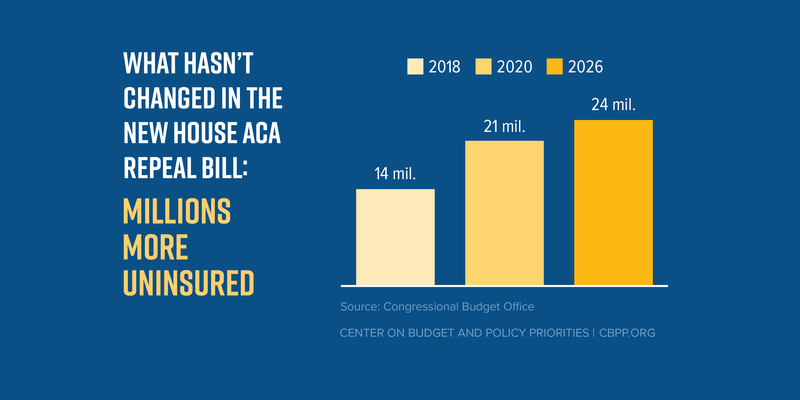 The updated House Republican plan takes an already damaging plan and makes it even more harmful for the tens of millions of children, seniors, people with disabilities, and other adults who rely on Medicaid.

Due to the proposal in the House Republican health bill to convert Medicaid to a per capita cap or block grant, the aging of baby boomers would likely exacerbate the federal Medicaid spending cuts over the long run.

The updated House Republican legislation raises total out-of-pocket health costs (premiums, deductibles, copays, and coinsurance) by an average of $3,600 in 2020 for people who buy health insurance through the ACA marketplaces.

Cuts Taxes for the Wealthy, While Middle-Income Families Lose

In their updated health bill, House Republicans are doubling down on their plan to cut taxes for high-income households while cutting health insurance for mostly low- and moderate-income households…. [T]he updated bill would eliminate, for 2017, two taxes that fall only on high-income filers.

Harmful Impacts in Every State

The House Republican health care bill would cause 24 million people to lose coverage by 2026, the Congressional Budget Office estimates. That means 1 in 10 non-elderly Americans who’d have health insurance under current law (ACA) would lose it under the House bill. These reports detail how the bill would affect people in every state.

March 21, 2017
PreviousHousing Vouchers Work: Flexible Tool Effective for All Types of People and Places
NextTrump Tax Plan’s Hollow Promises of “Trickle-Down” Growth
Stay up to date
Receive the latest news and reports from the Center