The Senate Republican bill to repeal the Affordable Care Act (ACA) would leave 22 million more people uninsured while raising premiums and out-of-pocket costs for tens of millions more — and giving a tax windfall to those at the top. Here are some key analyses and charts that illustrate how the Senate bill would hurt coverage and affordability for millions of Americans.

Similar to its estimates of the House-passed bill, the Senate Republican health bill to repeal the Affordable Care Act would cause 22 million people to lose coverage by 2026 and drive $772 billion in federal Medicaid cuts over the next ten years, the Congressional Budget Office found.

The number of uninsured non-elderly people would rise dramatically in every state under the Senate GOP health care bill, new Urban Institute estimates show — more than doubling in 25 states and more than tripling in four states.

CBO: Senate Bill Cuts Medicaid by More Than One-Third by 2036
The Senate health bill’s Medicaid cuts would deepen significantly in the second decade, the Congressional Budget Office estimated, growing from 26 percent in 2026 to 35 percent in 2036, relative to current law.

The Senate bill to repeal the Affordable Care Act (ACA), which would effectively end the ACA’s Medicaid expansion starting in 2021 and convert the program to a per capita cap starting in 2020, would cut federal Medicaid spending and enrollment more in 2026 than the House-passed bill, Congressional Budget Office estimates show.

The Senate health bill would lower the annual increase in state Medicaid funding under a per capita cap to the general inflation rate for all populations starting in 2025, which is well below the House-passed bill’s already inadequate growth rate. That means states would have to absorb much deeper cuts in federal Medicaid funding over the long run than under the highly damaging House bill.

CBO: Senate Bill Would Raise Premiums, Deductibles, or Both for Most Marketplace Consumers

Under the Senate Republican health bill, most marketplace consumers would pay more in premiums, deductibles, or both, with older consumers facing the highest cost increases, the Congressional Budget Office reports. And in many cases, they’d be buying insurance that covered fewer benefits and offered fewer protections. 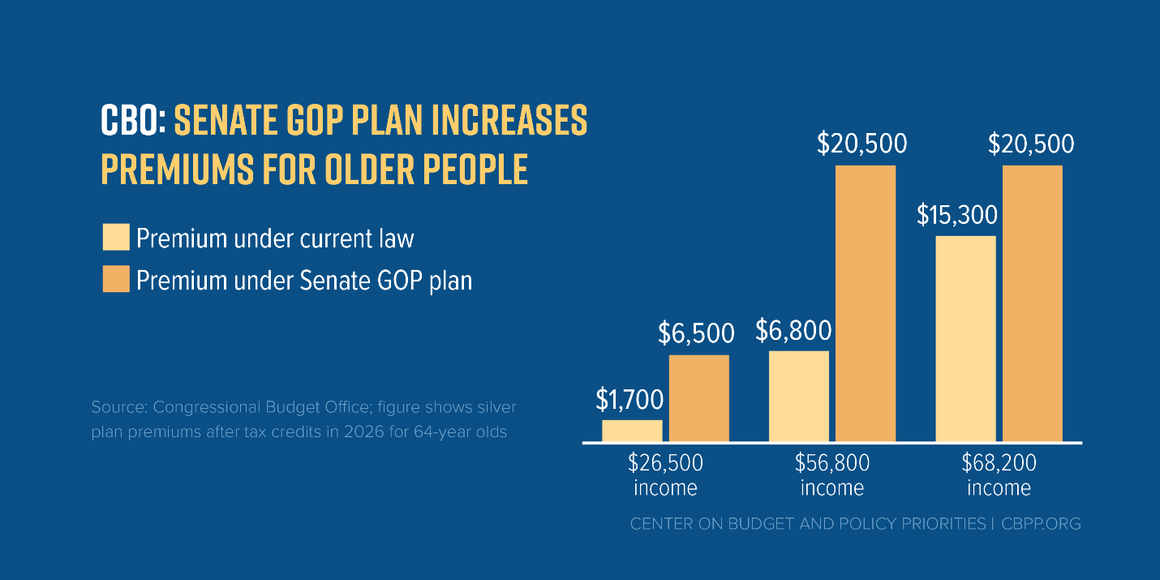 While the Senate bill’s cuts to tax credits are structured differently and are somewhat smaller on average, their broad consequences would essentially be the same: coverage and care would become much less affordable for millions of people with modest incomes. Moreover, the Senate’s subsidy changes, like those in the House bill, would particularly harm older people, lower-income people, and people in high-cost states. 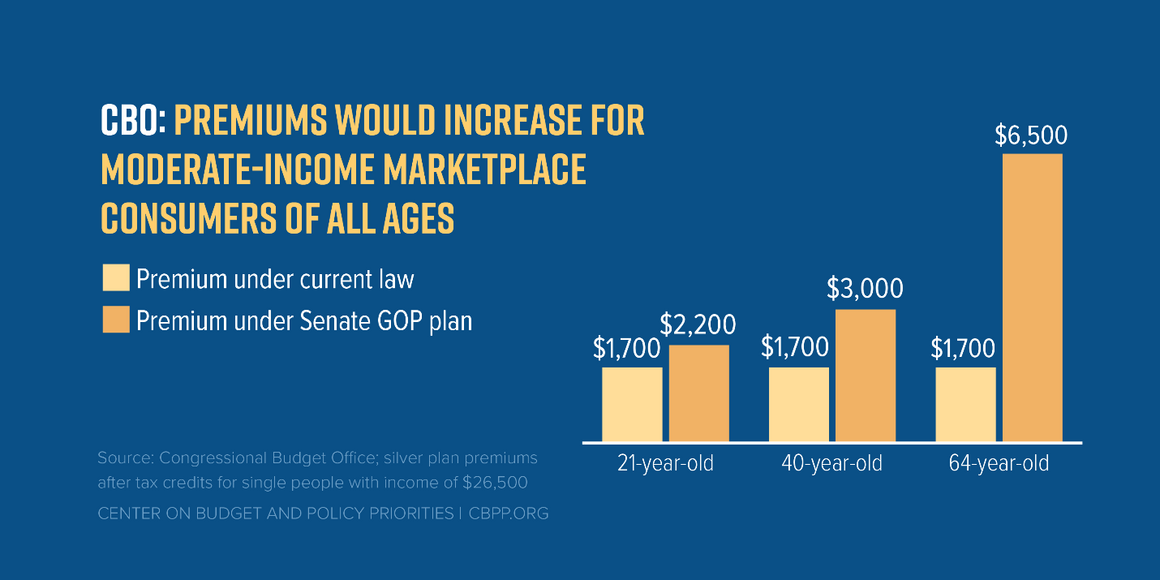 Cuts Taxes for the Wealthy, While Middle-Income Families Lose

Alongside the Senate bill’s devastating impact on coverage and well-being for lower-income families, the considerable damage it would inflict on middle-class families has received less attention. The bill would be particularly harmful for older middle-class people, people with pre-existing conditions and other serious health needs, and for middle-class families who depend on Medicaid: families caring for children with disabilities, people with disabilities who rely on Medicaid-funded services to work, and seniors receiving home-based services or nursing home care.

Wealthy, Corporations Still Win Big Under Senate GOP Health Bill Even With Possible Change
Senate Republicans are now reportedly considering removing one of their bill’s many regressive tax cuts — repealing the 3.8 percent tax on unearned income — to address concerns that the bill favors the wealthy.  But even with that change the legislation would still provide an estimated nearly $400 billion in tax cuts from 2017 to 2026 that go overwhelmingly to high-income households and corporations.

Senate GOP Adding Another High-Income Tax Break to Health Bill
A reported new provision to the Senate Republican health bill would let individuals use their Health Savings Account (HSA) contributions to pay their health insurance premiums.  That would do little or nothing to help the 22 million who would lose their health insurance under the Senate bill to afford other health coverage.  Instead, it would give yet another tax break to high-income individuals — on top of the bill’s large tax cuts for the wealthy that already include a provision to dramatically expand HSAs’ lucrative tax sheltering opportunities.

The House-passed bill to repeal and replace the Affordable Care Act, which the emerging Senate Republican health bill is expected to largely resemble, would lavish tax cuts on the wealthy and pay for them by cutting provisions that help millions of people afford health coverage and care.

Both the Congressional Budget Office and a growing number of state-based analyses are concluding that millions of people all over America would lose their Medicaid coverage due to the huge federal Medicaid funding cuts under both the House and Senate bills.

West Virginia Among Worst-Harmed States Under Senate Health Bill
West Virginia would be among the worst-harmed states in the nation under the Senate health bill. New Urban Institute estimates show that the bill would cause 218,000 West Virginians to lose coverage in 2022. In percentage terms, West Virginia’s uninsured rate would increase by 309 percent, the largest increase in any state.

The Senate’s changes to the House-passed health bill do not change the fact that the bill would take away coverage from tens of thousands of Alaskans and make coverage worse or less affordable for thousands more. As with the House bill, Alaska may be the single most harmed state under the Senate bill’s policies.

The draft Senate health bill slashes programs that help people get health coverage, using most of the savings to pay for tax cuts for high-income households and corporations.

The House-passed bill to repeal the Affordable Care Act — the American Health Care Act — would cause 23 million people to lose coverage and make coverage worse or less affordable for millions more. A number of Republican senators initially rejected the House bill and promised to start from scratch in crafting their own version. But the discussion draft from Senate Majority Leader Mitch McConnell would retain the House bill’s most harmful structural features. As a result, the Senate bill would do much the same damage to health care coverage, affordability, and quality.