Senate Republican leaders reportedly plan to add a new provision to their bill repealing the Affordable Care Act (ACA) that would let individuals use their Health Savings Account (HSA) contributions to pay their health insurance premiums.  That would do little or nothing to help the 22 million who would lose their health insurance under the Senate bill to afford other health coverage.  Instead, it would give yet another tax break to high-income individuals — on top of the bill’s large tax cuts for the wealthy that already include a provision to dramatically expand HSAs’ lucrative tax sheltering opportunities.

Under current law, individuals in a high-deductible health plan (with a deductible of at least $1,300 for individuals and $2,600 for families) may create an HSA to save money for their out-of-pocket health expenses. The accounts offer unprecedented tax-sheltering opportunities for high-income taxpayers because: (1) they can make tax-deductible contributions of up to $3,400 a year for individuals and $6,750 for families; (2) participants may put their contributions in stocks, bonds, or other investments, with the earnings accruing tax free; and (3) withdrawals are tax exempt if used for out-of-pocket medical or long-term care costs.  No other savings vehicle offers all three tax benefits. For example, 401(k) contributions and earnings are tax-free but withdrawals are taxed.  Moreover, with no income limits on HSA participation, affluent people whose incomes are too high to qualify for individual retirement accounts or who have “maxed out” their 401(k) contributions can use HSAs to shelter more funds.

HSAs mainly benefit higher-income people, who can most afford to save for health care expenses and will most likely contribute to HSAs. Furthermore, high-income people receive the biggest tax benefit for each dollar of HSA contribution because they face the highest marginal tax rates. These factors explain why 70 percent of HSA contributions come from households with incomes over $100,000, according to the Joint Committee on Taxation (JCT) (see chart), and why filers with higher incomes are likelier than lower-income filers to make considerably larger contributions as well as make the maximum annual HSA contribution. 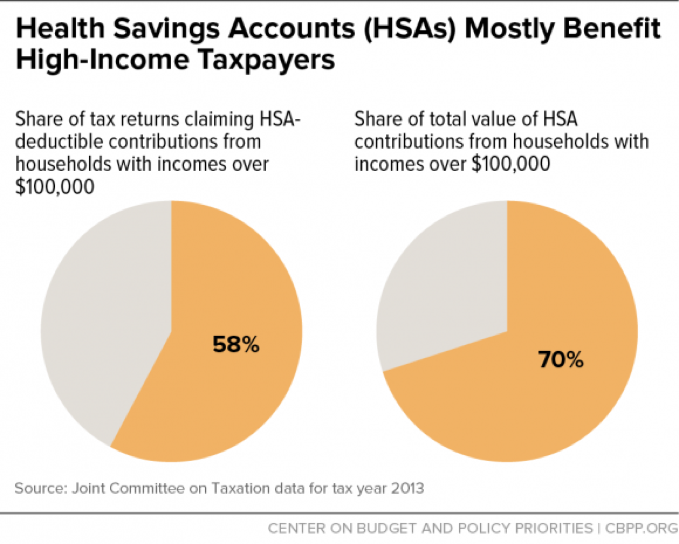 The underlying Senate bill already includes a provision that would make these lucrative tax-sheltering opportunities with HSAs even more valuable for the wealthy.  As in the House bill, the Senate bill’s principal HSA expansion would nearly double the maximum annual HSA contribution amounts, to $6,550 for individuals and $13,100 for family coverage.  That would tilt HSAs’ tax benefits even more toward those at the top because only people who are wealthy enough to “max out” their contributions under the current limit would benefit.  That would cost $19 billion between 2017 and 2026, JCT estimates. The cost of that provision, however, would likely grow significantly over time because much of the cost associated with HSAs occurs when people make tax-free withdrawals from the accounts in retirement — in lieu of sources that are taxable — to pay for medical and long-term care.

Now, under the new provision, the Senate Republican bill would reportedly go even further — to let HSA account holders withdraw funds to pay premiums, which they can’t do now.  Because, as noted, HSA contributions are tax-deductible, this would effectively create a tax deduction for the premium costs of a high-deductible plan in the individual health insurance market.  People could contribute to their HSAs and immediately withdraw those funds to pay their monthly premiums on a tax-favored basis.  But that would do little or nothing to help the tens of millions of low- and middle-income people who’d end up uninsured under the Senate bill.

That’s because a tax deduction rises in value with an individual’s tax bracket, providing the largest tax benefit to high-income individuals.  But 90 percent of the uninsured before the ACA had incomes below 400 percent of the federal poverty line, Kaiser Family Foundation data reveal.  Thus, they had incomes either in the 10 percent or 15 percent tax bracket or too low to incur any income tax liability.  As a result, the uninsured would get an income tax benefit of no more than 15 cents for every $1 they can deduct and for most, much less than that — assuming they can even contribute to an HSA.  That’s not enough to make coverage affordable.  In contrast, high-income individuals who can already afford to buy high-deductible health insurance in the individual market would get a new tax break of 35 cents or more for every $1 in premiums (up to the annual HSA contribution limit).  In essence, they’d get still another substantial new tax break that they don’t need.

June 29, 2017
PreviousRoundup: Analyzing the Senate GOP Health Bill
NextCBO: Senate Bill Cuts Medicaid by More Than One-Third by 2036
Stay up to date
Receive the latest news and reports from the Center