President Trump’s new tax plan gave him a chance to start over and address the problems in his campaign’s tax plans. Instead, the new plan doubles down on core elements of his last plan (and his initial plan before that), which fell well short of meeting the promises of Republican leaders: that tax reform would not reduce overall revenues, would not cut taxes for the wealthy, and would focus its benefits on workers and families.

The campaign plan would have reduced revenues by $6.2 trillion over ten years, the Tax Policy Center (TPC) estimates. It would have cut taxes for the top 1 percent of households by an average of $317,000 apiece in 2025, raising their after-tax incomes by 14.1 percent — while those in the middle (with incomes between about $50,000 and $90,000) would have seen their after-tax incomes increase by only 1.5 percent on average, and those at the bottom would have received even smaller tax cuts. (See chart.) 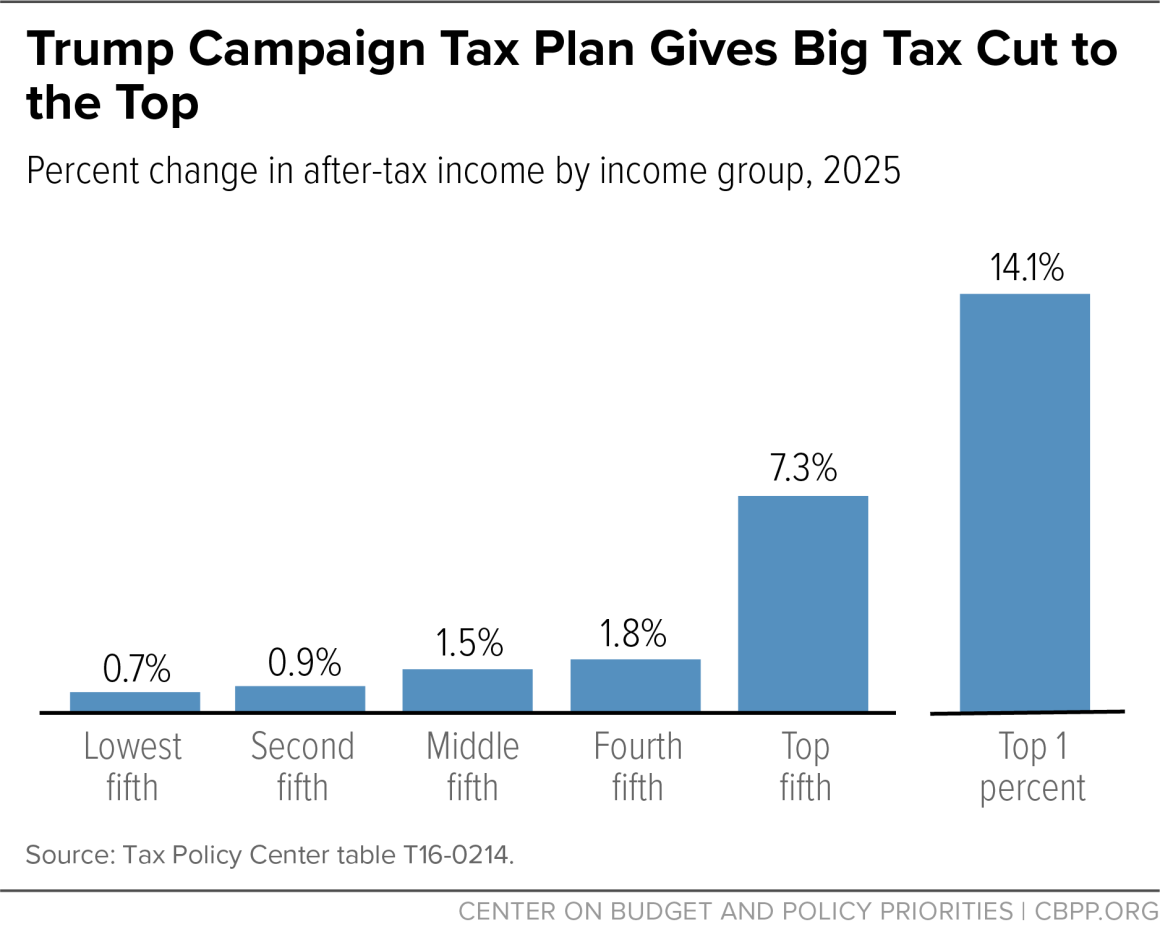 The new plan also comes with a huge cost — easily $5 trillion over the decade — and a heavy tilt to the top. Like his old plan, his new plan would:

Further, President Trump has endorsed the House GOP’s plan to repeal the Affordable Care Act (ACA), and that too would give billions in tax cuts to the wealthy (primarily by eliminating ACA taxes that were imposed only on those at the top) — with average annual tax cuts of more than $45,000 flowing to the top 1 percent. (The House GOP plan would pay for the tax cuts by cutting provisions that help millions afford health care.)

The revenue raisers that Trump has specified to offset the cost of these tax cuts would make, at best, a modest dent in that revenue loss. Accounting for Trump’s proposal to restrict itemized deductions outside of the charitable and mortgage interest deductions, the top 1 percent would still receive annual tax cuts of at least $250,000, according to our calculations based on TPC’s estimates. That’s without counting all of the other Trump proposals from which they’d benefit, like repealing the Alternative Minimum Tax (AMT) and eliminating the estate tax on inherited wealth.

President Trump may support additional revenue-raising provisions and anti-tax-avoidance measures. But some of those proposals would be needed just to keep the plan from bleeding even more revenue as wealthy and corporate tax avoiders take advantage of new opportunities in this proposal to avoid paying taxes. And none of those additional measures was outlined in yesterday’s proposal — unlike the multi-trillion-dollar tax cuts that the plan fully specified.

During his campaign, President Trump said that “[his tax plan] reduces or eliminates most … deductions and loopholes available to special interests, and to the very rich. In other words, it’s going to cost me a fortune, which is actually true.” But President Trump himself represents the very type of wealthy investor who’d likely benefit significantly from his key specific tax cuts, such as eliminating the AMT and the estate tax, and cutting the rate on pass-through businesses (he has about 500 of them). And it remains unclear what provisions his plan will include that would raise revenues from such wealthy people.

Meanwhile, as with the campaign plan, the new plan offers low- and middle-income families mostly vague promises. And if, to pay for the tax cuts for high-income earners, the plan doesn’t eliminate other tax breaks and loopholes that mostly benefit the same households or include other provisions that raise revenue from the wealthiest, those tax cuts would increase deficits. That would put federal programs like Social Security and Medicare at greater risk of future cuts, which in turn would leave low- and middle-income families worse off — and that doesn’t even count the specific cuts to health care and other programs that Trump has already embraced.

The bottom line: the new tax plan looks very much like President Trump’s old plan, costing more than $5 trillion over ten years and offering comparably large tax cuts to the most well-off and far less to those in the middle and at the bottom.

Commentary: New Trump Tax Plan Has Specific Costly Tax Cuts at the Top, Fuzzy Promises for Everyone Else