A centerpiece of the tax framework that the Trump Administration and congressional Republican leaders announced on September 27 is a special, much lower top rate for “pass-through” business income — that is, income from businesses such as partnerships, S corporations, and sole proprietorships that is claimed on individual tax returns and taxed at the same rates as wages and salaries.  These businesses already have the advantage of being exempt from the corporate tax on profits.

The GOP framework would sharply cut the top rate on this income from 39.6 percent to 25 percent — well below its proposed top individual income tax rate of 35 percent. This would overwhelmingly benefit high-income people; millionaires would receive about 80 percent of the tax cuts ($50,000 on average) in 2018 from cutting the top pass-through rate to 25 percent.  It would also spur large-scale tax avoidance, by creating an incentive for high earners to reclassify their income to take advantage of the lower pass-through rate.  Of the $770 billion cost over ten years from reducing the top tax rate on pass-through income to 25 percent, about $130 billion would be due to tax avoidance by high earners alone.[1]

Wealthy Investors Would Benefit Most

The biggest beneficiaries would be wealthy investors, since they receive most pass-through income and would receive the biggest rate cuts.  They include:

A special lower tax rate for pass-through income would create a costly loophole.  High earners would have a major incentive to reclassify their wage and salary income as “business income” to get the lower pass-through rate. For example, a law firm partner who reclassified her $1 million salary as business income from the law firm would save about $100,000 in taxes under the pass-through proposal in the GOP framework.

About $130 billion of the $770 billion cost of reducing the top tax rate on pass-through income to 25 percent would come purely from such tax avoidance by high earners, according to TPC.  That amount easily exceeds the provision’s total tax cuts for the bottom 99 percent of the population.

It would be hard to prevent such gaming. Congress and the IRS already struggle to design and enforce rules preventing high earners from reclassifying their wages as “business income” to avoid payroll taxes.  This tax break would create an even greater incentive to use such schemes.

Most small businesses are in fact “small,” and most small business owners’ incomes are already taxed at lower rates than the top rate in the GOP framework, so they would not benefit from cutting the tax rates that only high-income filers face. Some 86 percent of filers with pass-through income are currently taxed at a statutory marginal income tax rate of 25 percent or less.  (See Figure 1).  Indeed, only about 2 percent of households with incomes below $100,000 would get any tax cut from the provision.

Proponents argue that a lower pass-through rate is necessary to establish “parity” between taxes paid by pass-throughs and “C corporations” that pay the corporate income tax. But that’s misleading.

As part of an aggressive set of tax cuts championed by Governor Sam Brownback, in 2012 Kansas exempted pass-through income from all state income taxes, with damaging results.

In recognition of these poor outcomes, in June 2017 Kansas lawmakers reversed most of the tax cuts, including repealing the pass-through exemption, overriding Governor Brownback’s veto of the measure by a bipartisan two-thirds majority. 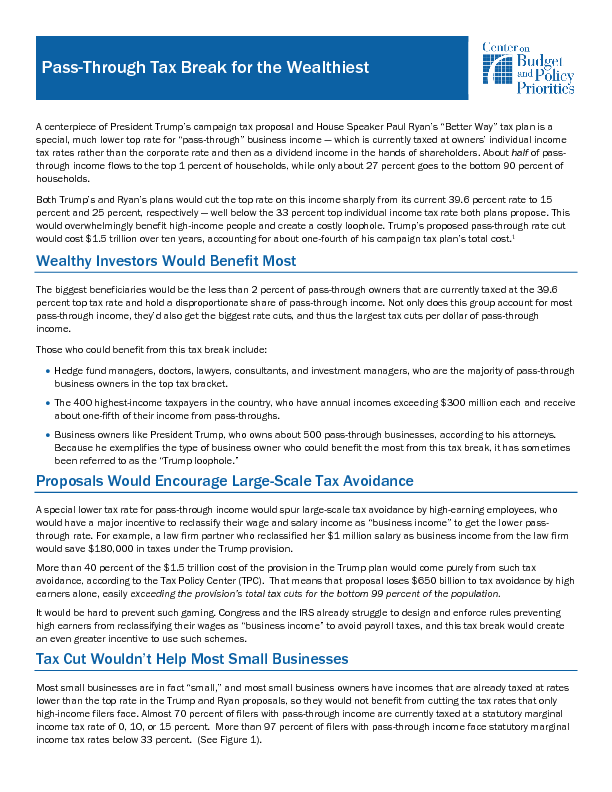