Policymakers have cut the IRS budget sharply since 2010, weakening the agency’s ability to serve taxpayers and enforce the nation’s tax laws. Even so, House Republicans continue to target the IRS for deeper cuts. The House Appropriations Committee will consider a bill this week that cuts IRS funding by another $149 million. Adjusted for inflation, this would bring the IRS budget to $405 million below its 2017 level and $2.9 billion below its 2010 level — a 21 percent cut (see chart). Continued IRS cuts would further weaken the agency, embolden tax cheats, and harm honest taxpayers.

The proposed cuts would be particularly damaging since they follow a multi-year squeeze on IRS resources. Funding pressure since 2010 has forced the agency to sharply reduce its workforce and delay long-overdue upgrades to information technology systems, harming customer service, compromising cybersecurity, and undermining efforts to combat tax avoidance and identity theft, as we’ve documented. The cuts would also further weaken taxpayer services, including cutting funding in half for programs that help elderly and low- and moderate-income people file their taxes.

Cutting funding for enforcement and taxpayer services also contradicts the Administration’s stated goal of reducing the “tax gap” — the difference between taxes owed and taxes paid. That’s why Treasury Secretary Steven Mnuchin called for increasing IRS resources (even though the President’s budget ultimately proposed cutting them). Underfunding enforcement is penny-wise and pound-foolish. Treasury estimates that every additional $1 invested in enforcement can produce $6 in additional revenue through audits and criminal investigations, and the additional, indirect savings from deterring tax evasion are more than three times that.

Providing sufficient resources for enforcement is especially important this year, as Republicans aim to make fundamental changes to the tax system that would require significant IRS resources to implement. Some of these changes, such as a special reduced rate on “pass-through” business income, could create new opportunities for large-scale tax avoidance, stretching IRS enforcement resources even thinner.

Most fundamentally, further cuts to an already under-resourced IRS could undermine the public’s trust that tax laws will be enforced. House appropriators should reverse course and give the IRS the resources it needs to do its job. 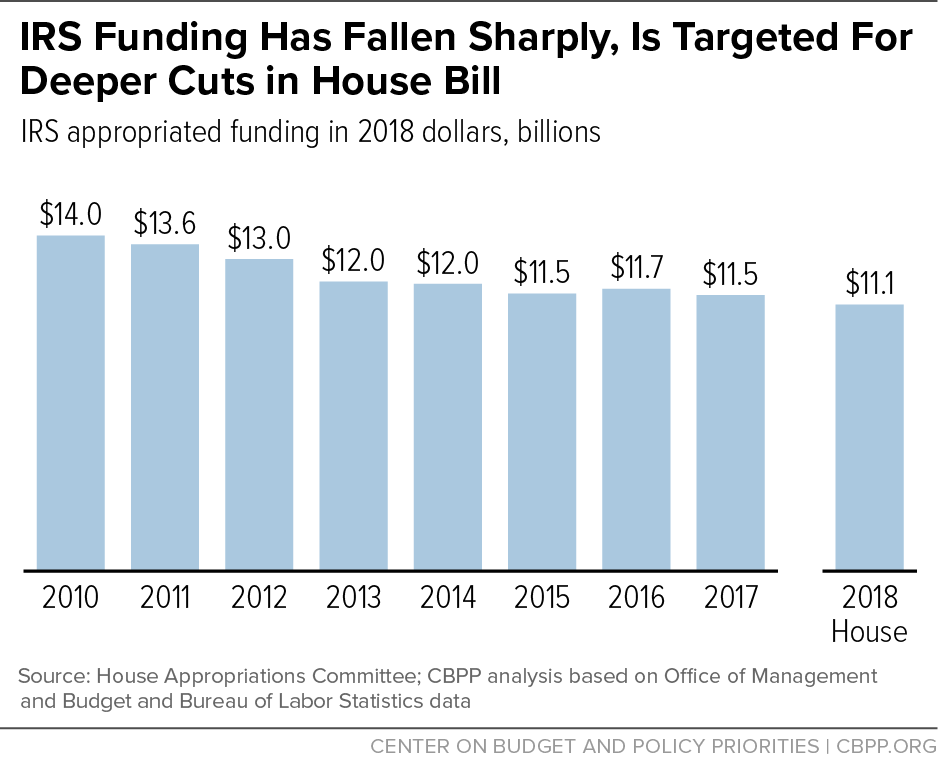 April 27, 2017
PreviousDeficits Under Trump Budget Even Bigger Than CBO Expected to Show
NextHouse Bill Cuts Tax Services for Low-Income and Elderly Filers, Enables Large-Scale Tax Avoidance by Wealthy
Stay up to date
Receive the latest news and reports from the Center