Millions of people who work for small businesses have gained coverage through the Affordable Care Act (ACA), a benefit of health reform that hasn’t received much attention but is under threat as congressional Republicans move to repeal the law.

The number of uninsured employees of small businesses (those with fewer than 50 workers) dropped by 4.1 million between 2013 and 2015 and their uninsured rate fell from 27.4 percent to 19.6 percent, CBPP’s analysis of Census data finds (see chart). Greater coverage in the individual insurance market and Medicaid largely drove this improvement, as the number of small-business workers with these forms of coverage rose by 3.1 million and 1.7 million, respectively. 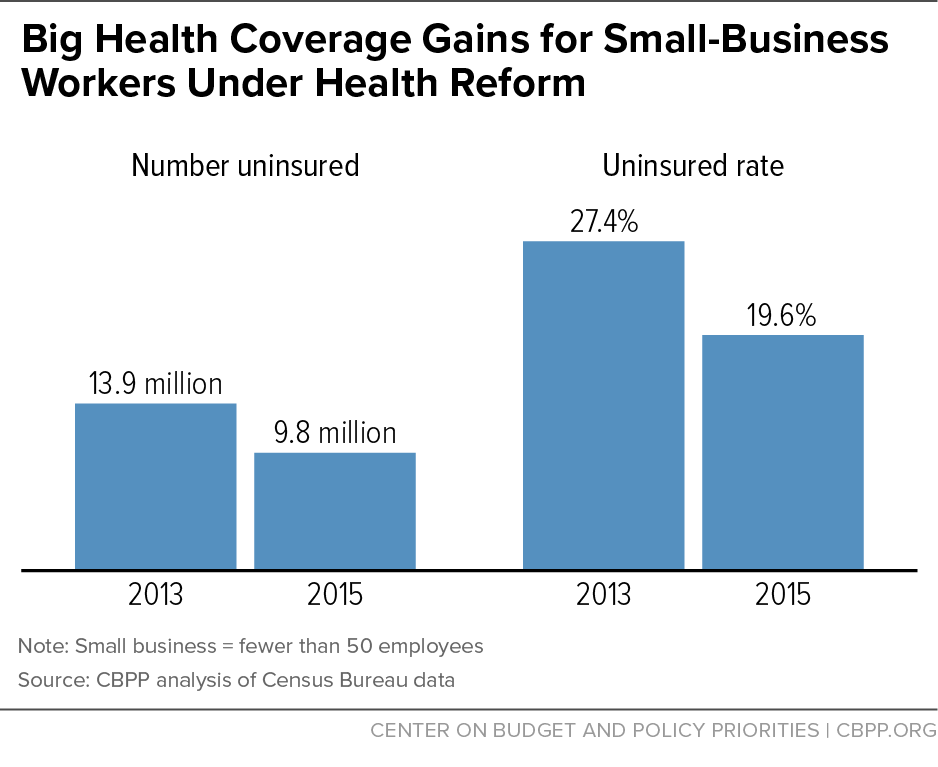 A number of ACA changes that took effect in 2014 have helped expand coverage of small-business workers:

The ACA helps small businesses in other ways. For example, it bars insurers in the small-group market (where small businesses buy coverage for their workers) from charging small firms higher premiums because of workers’ health status or other characteristics, such as working in a profession deemed high risk. It also requires these insurers to base their premiums on the cost of covering all their customers in the market, not just one firm. Before the ACA, one worker’s expensive illness could cause the premiums for the whole firm to spike.

Expanding coverage for workers benefits them and small businesses. Having coverage allows people to get needed medical services, including preventive care to keep them and their families healthy. Small-business owners, many of whom likely want to offer health benefits, cite cost as the major barrier. The good news is that millions of small-business employees have gained affordable coverage through the ACA. The bad news is that repeal could undo this progress.

December 22, 2016
PreviousNew Jersey’s Inequality Problem
NextDon’t Legislate in the Dark; Do a Real Budget
Stay up to date
Receive the latest news and reports from the Center