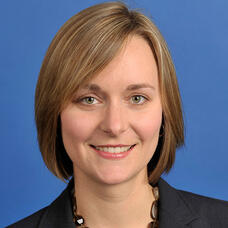 Sarah Lueck is the Vice President for Health Policy. She leads the Center’s work on Medicaid, the Affordable Care Act, and other health care issues, with a focus on advancing policies that make health coverage more accessible and affordable for low-income people and reduce racial and ethnic health disparities.

Lueck joined the Center in November 2008 as a Senior Policy Analyst. She has worked on issues related to health reform implementation, specifically health insurance exchanges and private market reforms included in the ACA. She is also a consumer representative to the National Association of Insurance Commissioners.

Before joining the Center, Lueck was a reporter for nine years in the Washington bureau of The Wall Street Journal. For much of that time, she wrote about health policy, including Medicare prescription-drug legislation, state and federal proposals to modify Medicaid, and the efforts of health care companies to influence policy changes.

A native of Des Moines, Iowa, she graduated from the University of Iowa in Iowa City with a B.A. in Spanish.