This report reviews the progress in reducing the number of uninsured Americans since the ACA’s major coverage provisions took effect.  A recent Urban Institute report models the future impact of partially repealing the ACA, as under a bill similar to the reconciliation bill that President Obama vetoed in 2016.[1]  The Urban Institute finds that in 2019, the number of uninsured would rise by nearly 30 million (and more than double), relative to current law.  Together, these reports show the ACA’s critical value in reducing the ranks of the uninsured.

Number of Uninsured Fell by Nearly 13 Million by 2015

Starting on January 1, 2014, the ACA gave states the option to expand Medicaid to more low-income adults and established subsidies for low- and moderate-income families to buy private coverage through health insurance marketplaces.  Subsequently, the uninsured rate fell by 2.9 percentage points in 2014 and by another 1.3 percentage points in 2015, according to Census Bureau data[2] — by far the two greatest single-year declines on record since these data were first collected in 1987.[3]  (See Figure 2.)  Nearly 13 million fewer people were uninsured in 2015 than 2013.

Moreover, these figures don’t account for additional coverage gains before 2014 related to other ACA provisions, namely its extension of employer coverage to dependents up to age 26 and some states’ early implementation of the Medicaid expansion.

Congressional Republican plans to repeal the ACA, like the bill that President Obama vetoed in January 2016, would eliminate subsidized marketplace coverage and state Medicaid expansions after two years.[4]   People who have gained coverage under these provisions would once again become uninsured.

Both Private and Public Coverage Have Expanded

Repealing the ACA would reverse its balanced approach to reducing the number of uninsured Americans.  Private coverage and public coverage rates grew together in both 2014 and 2015 because of the ACA’s coverage structure.  This hadn’t happened since 2000.

Repealing the ACA would reverse the recent coverage gains among all demographic groups that the Census health insurance data cover, including gender, income, working status, educational status, and race/ethnicity.[8]  The declines in the uninsured rate from 2013 to 2015 range from 23.4 percent among those with family income above 300 percent of the poverty line to 45.5 percent among Asian Americans.  (See Table 1.)  Examples of the widespread coverage gains include:

Coverage Has Expanded in All States

Repealing the ACA would reverse recent coverage gains in all states.  The uninsured rate dropped by at least one-fifth in 48 states between 2013 and 2015, and by at least one-third in more than half of the states.  By 2015, more than 90 percent of the non-elderly were covered in 26 states as compared to in only six states in 2013.  (See Figure 4.)

Coverage gains were strongest in states adopting the ACA’s Medicaid expansion.  Some 7.2 percent of the people in the 28 states (including the District of Columbia) that had expanded Medicaid by January 1, 2015 were uninsured in 2015, compared to 12.3 percent of people in the 23 non-expansion states.[9]  The uninsured rate fell in both groups of states between 2013 and 2015 but fell more in expansion states, widening the gap between the two groups of states from 4.1 to 5.1 percentage points.  (See Figure 5.)  The Centers for Disease Control (CDC), Urban Institute, and Gallup also have all found evidence of this growing divide.[10]

Although the Census Bureau data used throughout this report are the preferred source for health insurance coverage estimates, they have limitations.[11]  The CDC’s National Health Interview Survey (NHIS), another well-respected instrument, has more recent data and permits longer trend analysis.

The most recent NHIS data show that the uninsured rate was 8.9 percent for the first half of 2016.  This is the lowest since the CDC began collecting data in 1997 and more than two-fifths below the peak of 16.0 percent in 2010.[12]   Some 20.2 million fewer people were uninsured in the first half of 2016 than when the ACA’s initial provisions took effect in 2010, the data show.

[3] The uninsured rate for 2013 and beyond cannot be compared directly with the rate for previous years due to the Census Bureau’s adoption of new survey questions for 2013.  However, the changes in the uninsured rate in 2014 and 2015 can be compared with other single-year change within earlier historical series (each of which contains consistent, comparable data).  Census has four series of health insurance coverage estimates from the CPS, covering: (1) 2013-2015; (2) 1999-2012; (3) 1999-2009; and (4) 1987-2005.  Each successive series reflects changes from the previous series — in the way the health insurance coverage questions are asked or the survey responses are coded — to improve the accuracy of the survey results.  Comparisons of the single-year declines in 2014 and 2015 can be made to the single-year changes within each series of unadjusted data except for 1999 and 2013.  For those two years, we adjust the single-year changes based on Census estimates of how the survey changes instituted in those years affected uninsured rates.

[7] The Census Bureau permits individuals to identify multiple sources of health insurance coverage.  Thus, some people report having both private and public coverage.

[8] The lone exception is seniors, as more than 98 percent of the elderly have health coverage, nearly all through Medicare.  This figure has remained stable over time.

[9] Our count of Medicaid expansion states excludes Alaska, Indiana, Louisiana, and Montana, which have expanded Medicaid but hadn’t implemented their expansions by January 1, 2015. 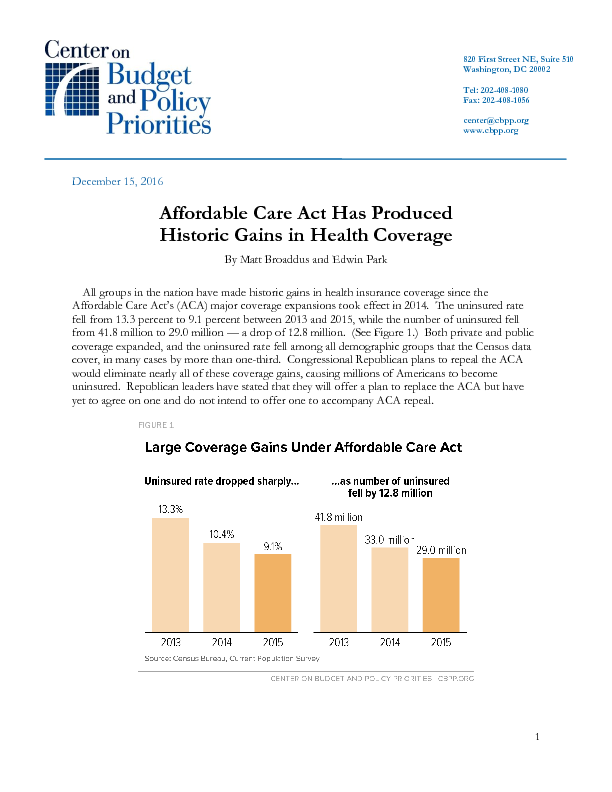