With congressional Republicans reportedly considering using budget reconciliation to repeal the Affordable Care Act early next year, it’s worth taking another look at the reconciliation bill they passed — but President Obama vetoed — last January to undo much of the health reform law.   As the Congressional Budget Office (CBO) found at the time, that bill would have raised the number of uninsured Americans by at least 22 million starting in 2018, relative to current law (see chart).  Thus, the bill would have reversed at least 92 percent of the historic health coverage gains that CBO expected health reform to achieve by 2018.

Among other things, the bill would have: 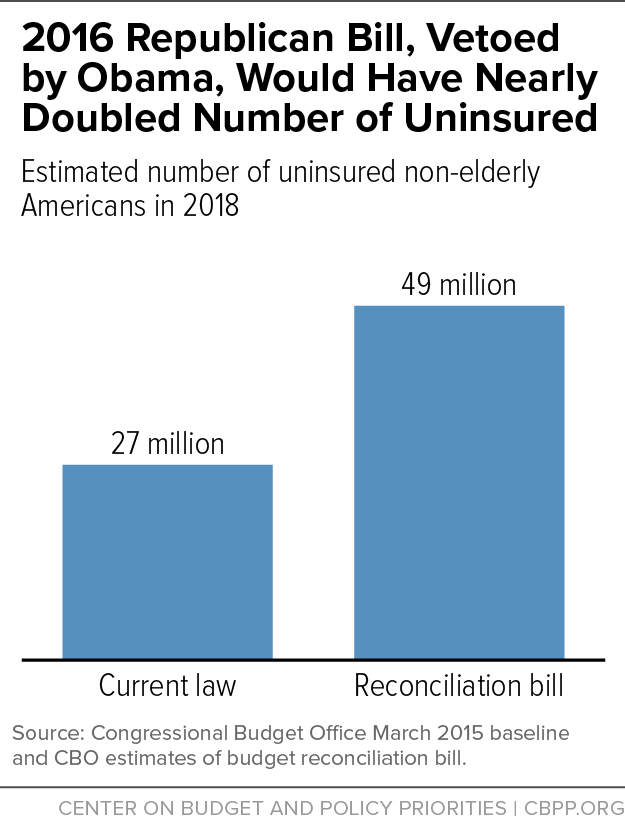 The bill left in place health reform’s market reforms, including those that bar insurers from denying coverage to people with pre-existing health conditions or charging them higher premiums in the individual market.  But without the individual mandate and the subsidies to make coverage more affordable, healthier people would likely drop or otherwise go without coverage.  Losing most of the healthy people from the risk pool would substantially push up individual market premiums for everyone else, by making those still enrolled sicker and costlier to cover, on average.  Higher premiums, in turn, would push even more healthy people out of the pool over time, driving up premiums still further.

As a result, CBO warned that the overall individual insurance market, particularly in smaller states, could entirely destabilize, “leading to very low to no participation by insurers and consumers.”  That would lead to even more uninsured people, on top of the 22 million increase that CBO already projected, relative to current law.