In the midst of birthday season — as we’ve marked the 50th anniversary of Medicaid and Medicare on July 30 and we’ll mark the 80th birthday of Social Security retirement on August 14 — here’s another one worth mentioning:  the Social Security disability program turns 59 tomorrow, August 1.

The original 1935 Social Security Act focused on old-age benefits for people who had passed their working years.  The 1939 amendments added protections for widows and dependents, and the 1956 amendments added cash benefits for workers who suffered a severe, disabling impairment.  Congress approved the 1956 amendments by large bipartisan majorities in both chambers, and President Eisenhower signed them into law on August 1.

Like all of Social Security, the disability program has evolved.  It was originally restricted to people age 50-64; the 1960 amendments opened it to younger, severely impaired workers as well.  (Nevertheless, older workers have always dominated the rolls, as the risk of disability rises steeply with age; see graph.)  Initially, beneficiaries were overwhelmingly men; in the program’s first years, male beneficiaries outnumbered females by 4 to 1.  Today, due to women’s growing importance in the paid labor force, nearly equal numbers of men and women collect Social Security disability. 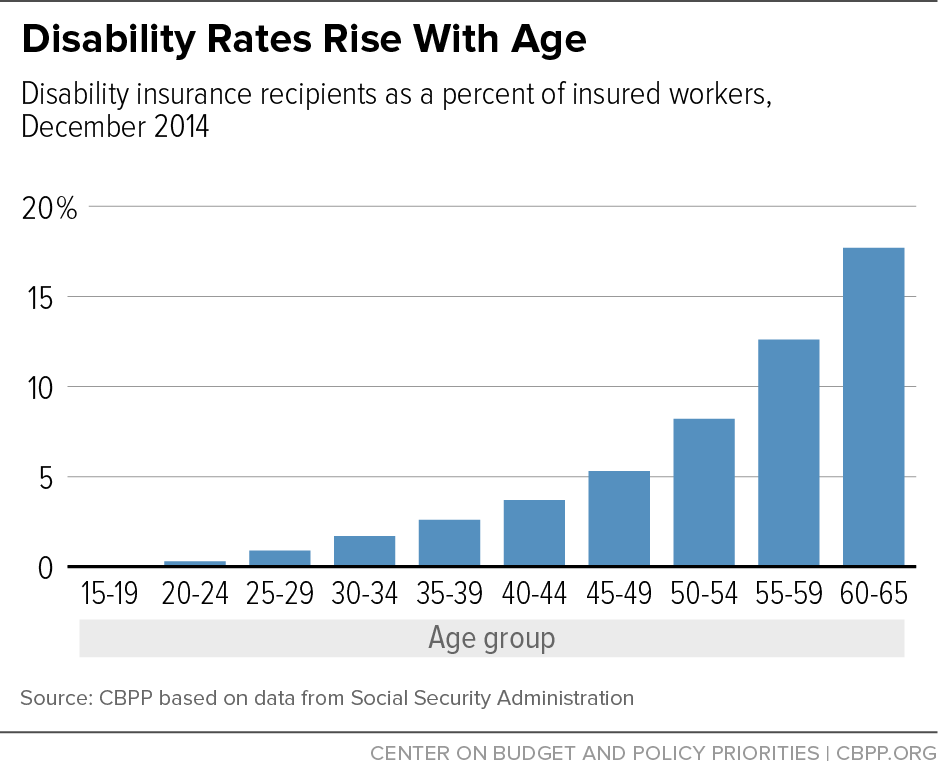 Disability Insurance is an essential part of Social Security.  Through their payroll tax contributions, more than 150 million workers have earned its protection in case of a severe, long-lasting medical impairment, and nearly 9 million of them receive benefits.  A young person starting a career today has a one-third chance of dying or qualifying for Disability Insurance before reaching Social Security’s full retirement age.

Policymakers will need to replenish the separate fund for Disability Insurance — a legacy of the 1956 law —by late 2016, but that’s been long predicted and need pose no crisis.  Lawmakers have routinely shifted taxes between the retirement and disability funds, in either direction, as needed.  They should do so again — or simply merge the two trust funds — to avoid a wholly unnecessary benefit cut in Disability Insurance as they work to strengthen overall Social Security solvency.

July 31, 2014
PreviousMedicaid at 50: A Critical and Evolving Pillar of U.S. Health Care
NextMedicare Isn’t Going “Bankrupt”
Stay up to date
Receive the latest news and reports from the Center