As policymakers consider how to replenish the fund that pays for Social Security Disability Insurance (DI), they should understand why the rolls have grown.  Nearly 9 million disabled workers received DI at the end of 2014, roughly three times the 1980 figure of 2.9 million.  Five demographic factors explain fully two-thirds of that growth.

(For more about these factors — and why some scholars, including economists David Autor and Mark Duggan and researchers at the Federal Reserve Bank of San Francisco, report a smaller demographic contribution — see our earlier paper here.)

In sum, these five demographic factors alone would have generated over 4.1 million more DI beneficiaries in 2014 — causing their number to rise from 1980’s 2.9 million to 7 million.  That leaves fewer than 2 million beneficiaries tied to other factors.

The Social Security actuaries express the number of people receiving DI using a rate that adjusts for four of these five factors (though not for “women’s catchup”).  Over the 1980-2014 period, that rate rose from 3.1 percent of the working-age population to 4.6 percent.  That’s certainly a significant increase, but not nearly as dramatic as some have painted (see graph). 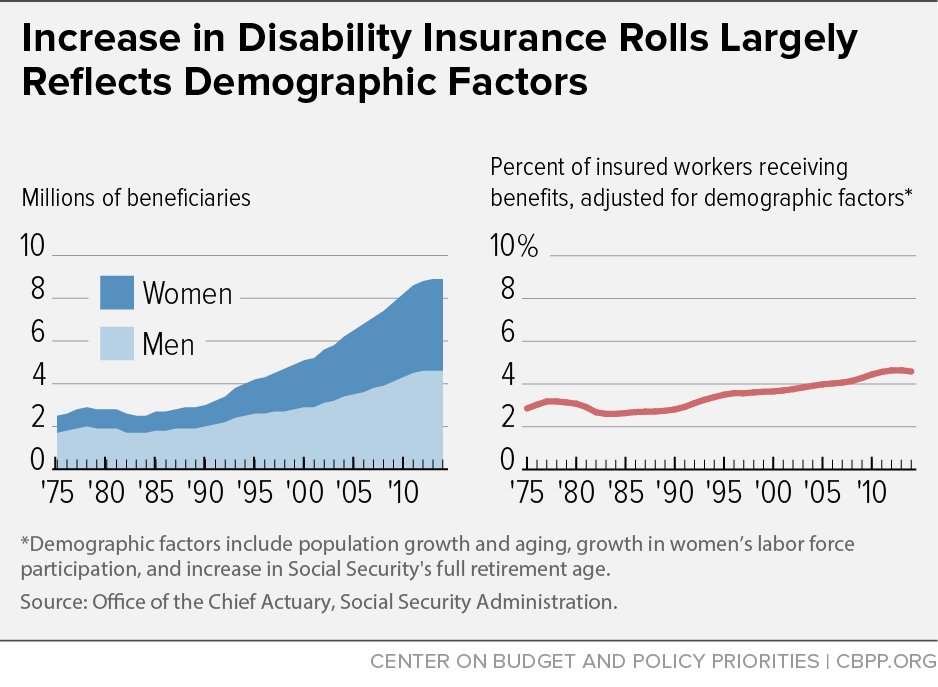 We’ll be back soon with many of the reasons for the rest of DI’s growth.

How Much of the Growth in Disability Insurance Stems From Demographic Changes?

January 27, 2014
PreviousHouse Bill Would Circumvent Budget Cap for Defense
NextOn the Map: Higher Education Funding Cuts and Tuition Hikes
Stay up to date
Receive the latest news and reports from the Center