U.S.-based multinationals pay U.S. corporate tax on their foreign profits only when they “repatriate” them, or bring them back to the United States. Many therefore use accounting maneuvers to report as much of their profits offshore as possible to avoid U.S. taxes. U.S. multinationals have about $2.6 trillion in profits booked offshore.[1]  Many multinationals assert that they would invest these profits in the United States, generating higher economic growth, if they received a tax cut on them. President Trump has also said, “we can return trillions and trillions of dollars to our economy and spur billions of dollars in new investments in our struggling communities and throughout our nation.”[2]

But there’s little evidence that the cash that firms repatriated would be used for substantial private investment or would help workers. A “repatriation tax holiday” enacted in 2004 led to a surge in repatriations but not in investment or hiring. Moreover, firms with some of the largest offshore profits today are paying out large amounts of cash to shareholders (which mostly helps high-income households, not typical workers) rather than investing it. This strongly suggests they would use repatriated funds for the same purpose. Instead, policymakers should ensure that firms pay taxes on those profits and should use those revenues for investments in this country that could have long-term economic benefits.

In 2004, lawmakers enacted a “repatriation tax holiday” that allowed multinationals to repatriate more than $300 billion in profits at a greatly reduced tax rate. Independent studies later found that multinationals largely used those repatriated profits not to invest in the United States or create U.S. jobs, but for the very purposes Congress had sought to prohibit, such as repurchasing their own stock and paying bigger dividends to shareholders. In fact, many firms laid off large numbers of U.S. workers while repatriating billions.  The top 15 repatriating corporations repatriated more than $150 billion during the holiday while cutting their U.S. workforces by 21,000 people between 2004 and 2007. [3]

Corporations Would Likelier Use Profits to Pay Shareholders Than Invest in U.S.

Profits repatriated under new tax legislation would likely go primarily to shareholders.  That’s true whether policymakers require firms to pay tax on existing foreign profits as part of a transition to a new international tax system, or simply give them a temporary tax cut to induce them to repatriate profits voluntarily, like the 2004 holiday. Only companies that can’t raise or borrow sufficient funds to make investments they expect to be profitable would likely invest repatriated earnings, and the companies with the most offshore earnings have been paying out large amounts of cash to shareholders lately – not investing it.

As in 2004, the bulk of profits now held offshore belong to a handful of technology and drug companies, many of which have made record cash payouts to shareholders in recent years. In 2016, the ten multinationals with the largest stocks of overseas earnings had accumulated $783 billion in offshore profits — more than 30 percent of U.S. multinationals’ total offshore profits. These ten companies spent $170 billion that year on dividends and share buybacks, which corporations typically do when they have more income than profitable investment opportunities. As Warren Buffett stated last year, “American corporations and private investors are today awash in funds looking to be sensibly deployed. I’m not aware of any enticing project that in recent years has died for lack of capital.”

Cash Payouts to Shareholders Do Little for Ordinary Workers

White House National Economic Council Director Gary Cohn recently claimed that repatriation could help workers because they would benefit through their pension funds, which hold stocks whose value will rise following the repatriation of offshore profits. However, figures showing that a repatriation tax cut primarily benefits the wealthy already take into account indirect stock ownership, both through the traditional (or “defined-benefit”) pensions that Cohn mentioned and through “defined-contribution” retirement plans, such as 401(k)s and IRAs.[4]  So Tax Policy Center estimates showing that 76 percent of the benefits of a repatriation tax cut on existing profits would go to the top 20 percent of earners (those with incomes above $150,000) and 40 percent to the top 1 percent (incomes above $725,000) already include whatever the benefits workers might receive through their retirement plans.

Profits Aren’t All “Trapped,” But Tax Revenue Is

Multinationals’ foreign profits are often portrayed as “trapped” offshore and unable to work in the U.S. economy, but a large portion is already in U.S. banks, held in U.S. dollars, or invested in U.S. Treasury bonds or U.S. corporate securities.[5]  What’s “trapped” is the U.S. taxes on them.

Sound tax reform would include “deemed repatriation”:  a one-time tax that multinationals must pay on existing foreign profits regardless of whether they declare those funds to have been repatriated; the tax rate should be as close as possible to the current rate. The revenues from the tax could help fund one-time infrastructure investments or reduce deficits, either of which could have economic benefits. (Because the revenues would be one-time, they couldn’t pay for permanent corporate rate cuts or other ongoing costs.) Future overseas profits would then be taxed under new rules. If sound, the new rules would reduce or eliminate tax advantages for reporting profits offshore and eliminate the incentive to hold profits offshore.

Unfortunately, Republican leaders instead have proposed a mandatory tax on current offshore profits at a rate well below the current 35 percent statutory tax rate.  The President has mentioned a rate of around 10 percent, while the House GOP’s 2016 “Better Way” plan proposed 8.75 percent for certain foreign profits and 3.75 percent for others.

Further, for a new international tax regime, President Trump and congressional Republicans support a “territorial” tax system that cuts the U.S. corporate tax rate on multinationals’ future foreign profits to zero. (This is a reversal of the Trump campaign proposal, which called for taxing overseas profits in the year in which they are earned and at the same rate as domestic profits.) A zero tax rate on foreign profits would increase the incentive for multinationals to avoid tax by reporting their profits offshore, likely bleeding revenues and increasing deficits.  And, to the extent that it encouraged multinationals to move real investment offshore, a territorial system could put U.S. workers’ jobs and wages at risk. (For more, see our tax reform brief on territorial taxation.) 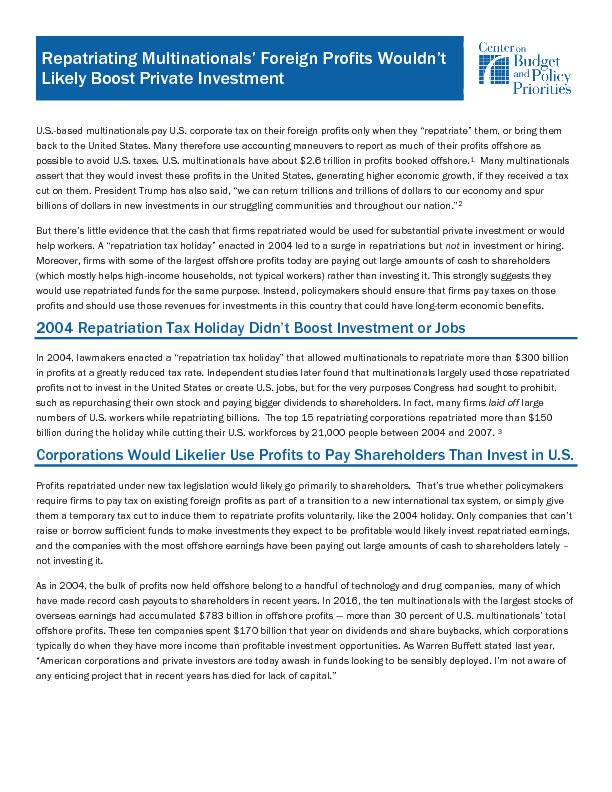