Senator Jeff Sessions (R-AL) recently posted to the Senate Budget Committee website a document that implies that programs targeted to low-income people provide lavish benefits that raise the typical poor household’s standard-of-living above that of the typical middle-income household.[1]   The Sessions release, however, is deeply flawed; it substantially overstates the assistance that poor households receive.  Means-tested programs do not raise poor households anywhere close to a typical middle-income household’s standard of living.

The Sessions document derives its numbers by adding up the cost of a large number of programs that are targeted on low- and moderate-income households — or on schools and communities with large numbers of low- and moderate-income students or residents — and dividing the total cost of these programs (all of which it labels “welfare”) by the number of households below the official poverty line.  It claims this shows that we spend the equivalent of $168 per poor household per day — or more than $60,000 per poor household annually.  It then compares this per-household amount to median household income.

This comparison rests, however, on a series of serious manipulations of the data that violate basic analytic standards and are used to produce a potentially inflammatory result.  To produce its claims, the document Senator Sessions posted does the following:[2]

We now examine these problems with the Sessions document in more detail.

A very large share of means-tested health spending is for seniors and people with disabilities.  Although they made up only 25 percent of Medicaid and CHIP beneficiaries in 2009,[6] fully 66 percentof Medicaid spending went for care for these groups.  Providing care to a frail elderly person or a person with a disability costs much more than the typical cost of care for a child or a working-age parent.[7]

Long-term care alone constitutes 28 percent of all Medicaid costs[8] — and a larger share of Medicaid costs for seniors and people with disabilities.  A substantial share of Medicaid spending on long-term care is for seniors who had middle-class incomes for much of their working lives but whose long-term care needs now exceed their ability to pay for that care.  In 2010, private nursing home care averaged $83,585 per year, assisted living facility costs averaged $39,516 per year, and home health aide services averaged $21 per hour.  In 2009, the average long-term care cost for a Medicaid beneficiary receiving such care was $34,579, a figure sure to be somewhat higher today. [9]

By including the costs of such care in the calculation of the average spending per poor household, the Sessions analysis creates a misleading impression that typical low-income families and children receive extravagant benefits.  Providing a frail senior with nursing home care does not mean that the typical low-income family with children is receiving huge amounts of benefits that give it a high standard of living.

Aggravating this problem, while the Sessions piece includes the cost of health benefits targeted on lower-income individuals, it fails to take into account the value of employer-provided health care coverage.  Many middle-income households receive employer-provided coverage with a sizable contribution from the employer toward the cost of that coverage.  Sessions ignores this in the figure he uses for “median household income.”

We strongly caution, however, against including health benefits in a comparison that purports to describe the income available to families (at any income level) to meet their basic expenses; it is more useful to consider the income available for expenses such as food and housing and to consider separately whether a family has affordable health insurance.  Trying to convert the worth of health insurance to “income” produces very odd results, in part because the amount of health care that individuals consume varies very widely, and higher consumption often reflects poorer health status, not greater affluence.

Older people, people with disabilities, and people with serious illnesses incur far higher health care costs than do healthy individuals, but that doesn’t make them “higher income” or give them a higher standard of living than healthier households have.  Similarly, a low-income family with a child who has a serious disability is not “well off” because Medicaid covers the child’s sizable health care costs.  A middle-income household with a member fighting cancer doesn’t suddenly become “high income” when the family’s insurance covers costly cancer treatments.

Health care programs represent 46 percent of all federal means-tested spending that the Sessions analysis counts.  Had the analysis appropriately excluded health care spending from both sides of its comparison, rather than counting it for poor households while ignoring it for middle-class households, its figure for the amount of means-tested expenditures made on behalf of the average poor household would shrink nearly in half.[10]   The figure shrinks further if corrections are made to address the other serious deficiencies we identify here.

By Design, Income-Targeted Programs Are Not Limited to People in Poverty

Census data show that in 2011, a majority of families in which someone received at least one of the major means-tested benefits that the Sessions analysis counts had annual cash income above the official poverty line.  (For this analysis, we considered Temporary Assistance for Needy Families [TANF], SNAP, refundable tax credits, Medicaid, CHIP, Supplemental Security Income [SSI], housing assistance, energy assistance, WIC, and free or reduced-price school meals[12] .)

Second, some families receive assistance for part of the year when their incomes drop temporarily, such as when a parent loses a job or a marriage falls apart.  Families often qualify for assistance for several months until they get back on their feet, and then cease to qualify for assistance.  Many such families thus are poor during the months that they receive assistance, but have incomes for the calendar year as a whole that are above the poverty line.< 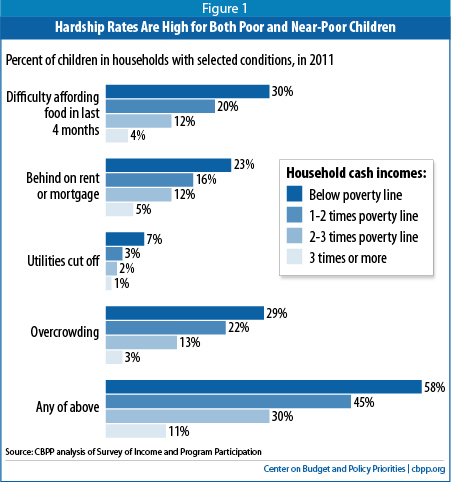 The Sessions analysis includes the benefits that all such families receive in the “numerator” of its fraction — that is, in its total dollar amount of means-tested benefit expenditures.  But the Sessions piece fails to includethese families in the “denominator” of its fraction — the number of poor households — because their annualincome shows up in the Census data as being above the poverty line, and hence they are not considered “poor.”

Congress has designed programs to provide various supports to families with annual incomes modestly above the poverty line for sound policy reasons.

By comparing spending on targeted benefits to median household income, the Sessions analysis may be read to imply that low-income families don’t work and have no earnings or wages.  That’s not correct.  In 2011, 80 percent of households headed by someone below 200 percent of the official poverty line who wasn’t elderly or disabled had earnings from work.[21]

Similarly, the comparison may be read to imply that middle-income families receive all of their income from earnings and don’t receive benefits from public programs.  That’s incorrect, as well.  In 2010, households in the middle 60 percent of the income distribution received 58 percent of the more than $1 trillion in federal entitlement benefits (including Medicare and Social Security[22] ).

Census data show that federal benefit programs that are targeted on low-income households to help them meet basic needs significantly reduce the incidence and depth of poverty.  As noted above, the federal government has developed a Supplemental Poverty Measure (SPM) that most analysts favor because it represents a more comprehensive measure of poverty.  Unlike the official poverty measure, the SPM counts various non-cash benefits such as SNAP and rental subsidies as income because they can be used to pay for such things as food, clothing, shelter, and utilities.  It also takes into account the taxes families pay and the refundable tax credits they receive (as well as differences in the cost of living across the country).[23]

Finally, though programs such as the EITC and SNAP lift millions of families and children out of poverty, the U.S. safety net remains less robust than that in most other Western countries.  Most other similarly affluent countries have lower rates of poverty than we do (using a widely recognized international poverty measure) after factoring in the impact of social programs — even though their poverty rates before counting social programs are similar to ours.  Stated another way, the U.S. poverty rate is near the average among Western countries before taking government social programs and taxes into account.  But once benefits from social programs and the effects of taxes are factored in, the United States lags behind the other countries and has a significantly higher rate of poverty than they do, because government policies do considerably more to reduce poverty in the other countries than they do here.  Social programs in other Western nations tend to be more generous, broader in scope, and easier to access.[25]

[3] Kaiser Commission on Medicaid and the Uninsured, “Medicaid’s Role in Meeting the Long-Term Care Needs of America’s Seniors,” January 2013, http://www.kff.org/medicaid/upload/8403.pdf.

[5] In accordance with the recommendations of a National Academy of Sciences panel, the SPM does not count Medicaid or other medical benefits as income; it subtracts out-of-pocket medical expenses from its measure of family resources. Families with Medicaid tend to have considerably lower out-of-pocket medical expenses than do other low-income families, who may be uninsured or face substantial cost-sharing requirements.

[6] Kaiser Commission on Medicaid and the Uninsured and Urban Institute estimates based on data from FY 2009 Medicaid Statistical Information System (MSIS), 2012, http://www.statehealthfacts.org/comparemaptable.jsp?typ=1&ind=200&cat=4&sub=52.

[7] Kaiser Commission on Medicaid and the Uninsured and Urban Institute estimates based on data from 2009 MSIS and CMS-64 reports, 2012, http://www.statehealthfacts.org/comparemaptable.jsp?typ=4&ind=858&cat=4&sub=47.

[8] Center on Budget and Policy Priorities analysis of 2011 CM-64 reports.

[10] CBPP analysis of Congressional Research Service “Spending for Federal Benefits and Services for People with Low Income, F&2008-FY2011: An Update of Table B-1 from CRS Report R41625, Modified to Remove Programs for Veterans,” October 16, 2012, http://budget.senate.gov/republican/public/index.cfm/files/serve/?File_id=0f87b42d-f182-4b3d-8ae2-fa8ac8a8edad.

[11] The federal poverty line for a family of three is currently $19,530.  Here we refer to the Department of Health and Human Services poverty guidelines for a family of three for the 48 contiguous states, which are used in setting eligibility for various means-tested programs.  See “Annual Update of the HHS Poverty Guidelines,” Federal Register, January 24, 2013, https://www.federalregister.gov/articles/2013/01/24/2013-01422/annual-update-of-the-hhs-poverty-guidelines#t-1.

[14]  CBPP analysis of U.S. Census Bureau data from the Survey of Income and Program Participation.  Poverty is based on annual household cash income below the traditional federal poverty threshold.  For more information on the method used to measure hardship, see U.S. Department and Health and Human Services, Measures of Material Hardship (2004), at http://www.kff.org/medicaid/upload/8403.pdf.

[17] For more on this view and an overview of research showing that existing safety net programs have very modest work and earnings disincentives, see Robert Greenstein, “Testimony before the House Budget Committee Hearing on Strengthening the Safety Net,” Center on Budget and Policy Priorities, April 17, 2012, https://www.cbpp.org/cms/index.cfm?fa=view&id=3745.

[19] Jeffrey Grogger, “The Effects of Time Limits, the EITC, and Other Policy Changes on Welfare Use, Work, and Income among Female-Head Families,” Review of Economics and Statistics, May 2003.

[23] The measure also makes adjustments in the poverty line, particularly in parts of the country where housing costs are high, and it deducts necessary work expenses and out-of-pocket medical expenses from income.  In 2011, under this more comprehensive poverty measure, some 50 million people had incomes below the poverty line, which was set at about $25,000 for an average family of four.

[24] CBPP calculations of the March 2012 Current Population Survey.  Note that survey-based estimates such as these tend to understate the value of income from government benefits and other sources because participating households may forget or underreport some income sources.  For some benefits, corrected data are available from the TRIM microsimulation model that the Urban Institute developed and maintains for the Department of Health and Human Services.  The latest year for which TRIM data are available is 2009.  When we repeat the analysis using 2009 TRIM-based figures for SNAP, TANF, and SSI, our estimates show that counting means-tested income assistance raises the incomes of otherwise-poor recipients to 4 percent below the poverty line, compared with 10  percent below the poverty line in the uncorrected SPM figures for 2009 — a small difference.

Taking Stock of the Safety Net, Part 6: It Works, But It Doesn’t Do Enough