Who Are the 30 Million Who Would Lose Coverage Under ACA Repeal?

New Urban Institute state fact sheets describe the nearly 30 million adults and children who would lose coverage in each state by 2019 if the new Republican majority repeals the Affordable Care Act (ACA) — with details by income, age, employment status, race, and education.

Urban’s earlier report showed the national-level demographics of those who would lose coverage. Low- and moderate-income families would be hit especially hard, with uninsurance rates rising for people of all ages and doubling for most age groups. Young adults (ages 18 to 24) — who’ve seen the biggest coverage gains under the ACA — would face the largest jump in the uninsured rate, rising from 14 percent to 31 percent. In addition, more than half of those who would lose coverage by 2019 have income below 200 percent of the federal poverty line ($23,760 for an individual or $48,600 for a family of four). Most people losing coverage would be non-Hispanic white (56 percent), in working families (82 percent), and have less than a college education (80 percent).

Urban’s new fact sheets provide similar demographic information on a state-by-state basis. For example, of the 964,000 Ohioans who would lose coverage (see graphic): 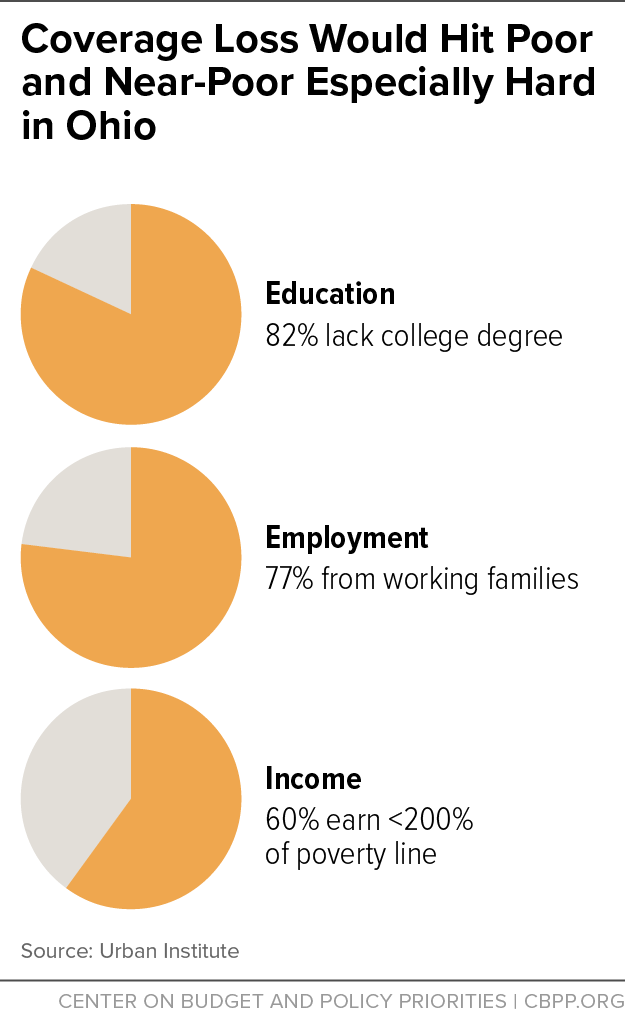 Among Ohioans who are expected to lose coverage, 77 percent are in working families. That figure is even higher for some groups: 91 percent of children and 86 percent of parents who would lose coverage are in families with at least one worker.

December 16, 2016
PreviousBudget Relief Should Go Equally to Defense and Non-Defense
NextBackgrounder: What Is a Health Savings Account?
Stay up to date
Receive the latest news and reports from the Center