TPC: Impacts of 2017 Tax Law’s SALT Cap and Its Repeal

The $10,000 cap that last year’s tax bill placed on the federal deduction for state and local taxes (SALT) overwhelmingly affects people at the top rather than the middle, new Tax Policy Center (TPC) estimates show, mirroring earlier estimates from the Institute on Taxation and Economic Policy. As a result, TPC finds, repealing the cap without putting anything in its place would deliver a large federal tax cut primarily to the most well-off. 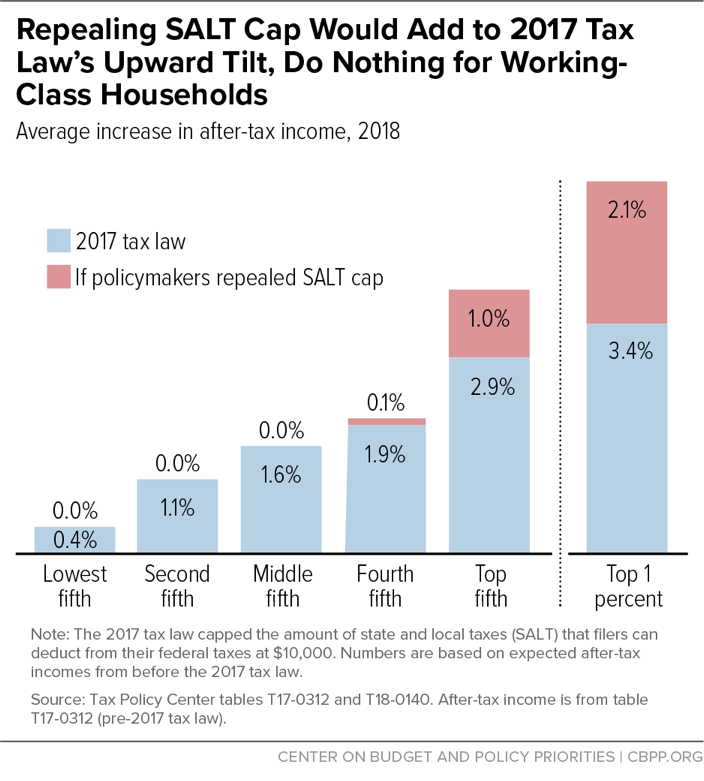 The top 1 percent of households would receive more than 56 percent of the tax cut from repeal, TPC finds, and the top 20 percent would receive 96 percent. Repealing the cap without making other changes in the tax law would thus compound both the 2017 tax law’s cost and its tilt to the most affluent:

If policymakers repealed the SALT cap and replaced it with a provision that raised the same amount of revenue from high-income filers, the result would be a wash. It wouldn’t reduce the 2017 tax law’s overall cost or regressive tilt.

At the same time, the SALT cap could make it harder for some states and localities to raise revenues from progressive tax sources if it reduces support for state and local taxes on the part of higher-income filers. Some states may need to address this challenge as part of a more comprehensive response to the federal tax changes. But the TPC findings deserve serious consideration in future tax policy debates.