| By Samantha Waxman and Iris Hinh

Child tax credits (CTCs) are an important way that policymakers can help families make ends meet, help children thrive now and in the future, and help families and communities recover from the pandemic. The federal credit should be expanded, and states should also create and improve their own CTCs (among other tax credits that help households with low incomes).

Nine states have already enacted and funded a CTC (see map), and states continue to enact new credits and improve existing ones. Last year, Colorado implemented and funded its CTC, which families will be able to claim for the first time when they file their 2022 taxes early next year, and Maryland created a new Child Tax Credit for families with children with disabilities. New Mexico recently created a credit worth a maximum of $175 per child this year; the full credit is available to families with low or no earnings (also known as a “fully refundable” credit). 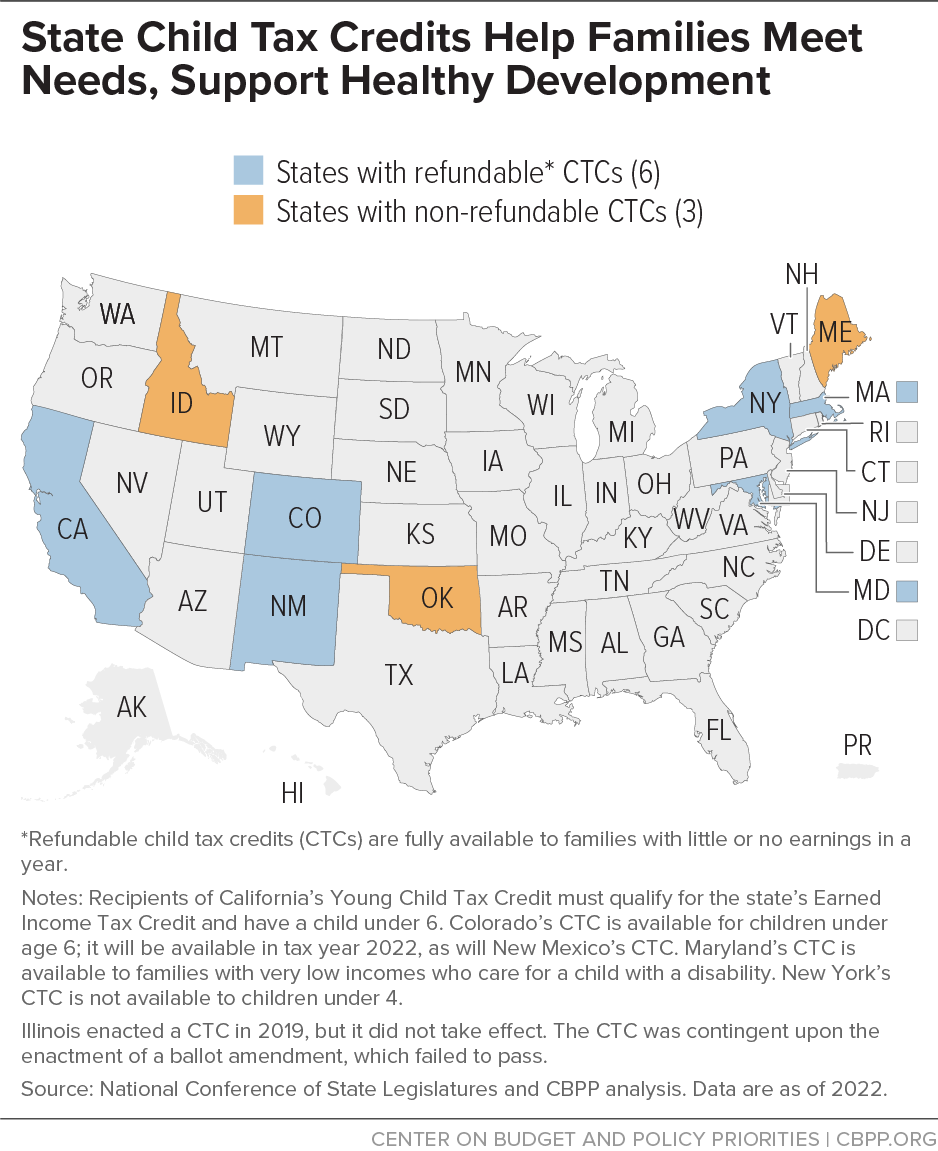 Federal and state child tax credits are an effective way to target tax reductions to people and communities that could most use the help. People of color, immigrants, and women are among those who have been disproportionately impacted by the economic downturn. Rising food and energy prices also continue to strain families’ budgets, making it harder for them to afford basics like food, gas, and rent. With most state tax systems already asking the most as a share of income from families earning the least, a child tax credit that works for low-income families can help make the tax code fairer while easing the strain on families’ budgets.

Unfortunately, a number of states are considering income tax cuts that would mostly benefit wealthy households and profitable corporations. That won’t help those most affected by the COVID-19 crisis. Enacting costly and permanent tax cuts based on temporary budget surpluses would erode revenue for crucial community assets such as quality K-12 schools, affordable health care, and functional infrastructure while further widening racial and economic inequities.

Instead, state policymakers should shift toward equitable, targeted approaches to helping families meet basic needs through improving or expanding tax credits like CTCs. In addition to creating new credits in states that don’t yet have one, states have a number of options to expand and improve their existing child tax credits. They should ensure these credits are available to children in families with low or no earnings, extend eligibility to children who may be claimed as tax dependents using an Individual Taxpayer Identification Number, and remove limitations such as New York’s credit being unavailable for children under 4.

The costs of enacting or improving existing credits are also typically small enough that states may be able to absorb them without raising additional revenue. If they must raise modest additional resources, states can choose from a range of sensible ways to do so. Either way, the substantial long-term benefits of child tax credits for families, communities, and local economies are worthwhile.

March 28, 2022
PreviousPresident’s Budget Would Provide More Vouchers to Help Families With Rising Housing Costs
NextIn Case You Missed It…
Stay up to date
Receive the latest news and reports from the Center