Most states provide costly, poorly targeted income tax breaks to seniors regardless of their income, reinforcing the unequal distribution of income and wealth that was driven in part by years of discrimination and other barriers for people of color. Re-targeting these tax breaks to people who need them the most would substantially benefit low-income seniors (including seniors of color), help offset income and wealth inequality, and generate savings to finance public services that can bolster the broader economy.

State tax breaks for seniors exempt income from retirement accounts, pensions, and Social Security, and they also include personal exemptions and deductions based on age. States can better target these breaks by means-testing them so that they don’t go to high-income seniors who don’t need them. They could also expand state Earned Income Tax Credits to seniors and take other steps to make state tax systems less regressive, as most are today.

Current state tax breaks for seniors tend to reinforce wealth and income inequities by race because: 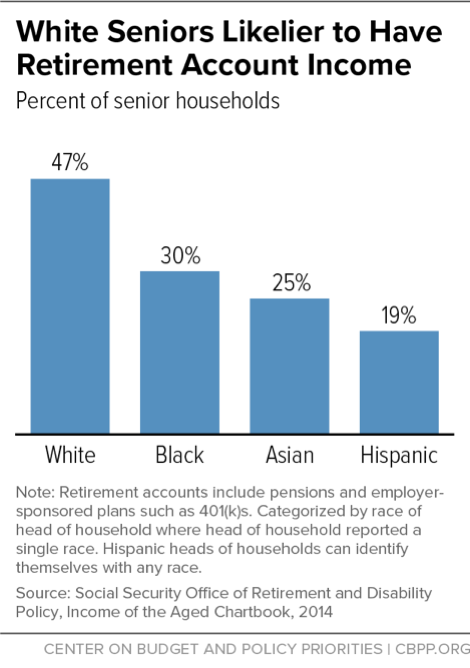 Better targeting senior tax breaks would help fix these regressive state tax systems and advance racial justice, including by generating revenue for public investments that can boost opportunities for people of color. Ensuring high-quality schools in all communities, making safer water systems and other improvements to public infrastructure (which is often neglected in communities of color), expanding access to affordable health care, and making other investments that reduce racial and ethnic inequities would help build an economy of more widely shared benefits.

When these kinds of public investments are strong and administered with equity in mind, they can help break down barriers to opportunity for communities of color and help more Americans achieve their potential, to the benefit of the broader economy.

States Should Target Senior Tax Breaks Only to Those Who Need Them, Free up Funds for Investments

November 15, 2018
PreviousTime for Utah to Fully Expand Medicaid
NextSenate Should Pave Way for Rebuilding IRS Enforcement
Stay up to date
Receive the latest news and reports from the Center