States Can Still Prepare for Next Recession

Most states have most or all of the “rainy day” funds — reserves to use when recessions or other unexpected events cause revenue declines or spending increases — needed to weather a moderate recession, but they still face many risks, according to the bond rating agencies Standard & Poors and Moody’s. States should act now to better prepare for the inevitable next downturn.

About a third of states are unprepared for even a moderate downturn, reports from these rating agencies find. (See map.) And if the nation faces another severe downturn — one that affects state budgets as much as the Great Recession did — only 14 states are prepared, according to Moody’s. Moreover, whether the next recession is moderate or severe, the federal government may be less helpful in reviving state economies, as growing federal deficits fueled in part by the 2017 tax law could make policymakers less willing to give states more funds to help offset their own budget problems. 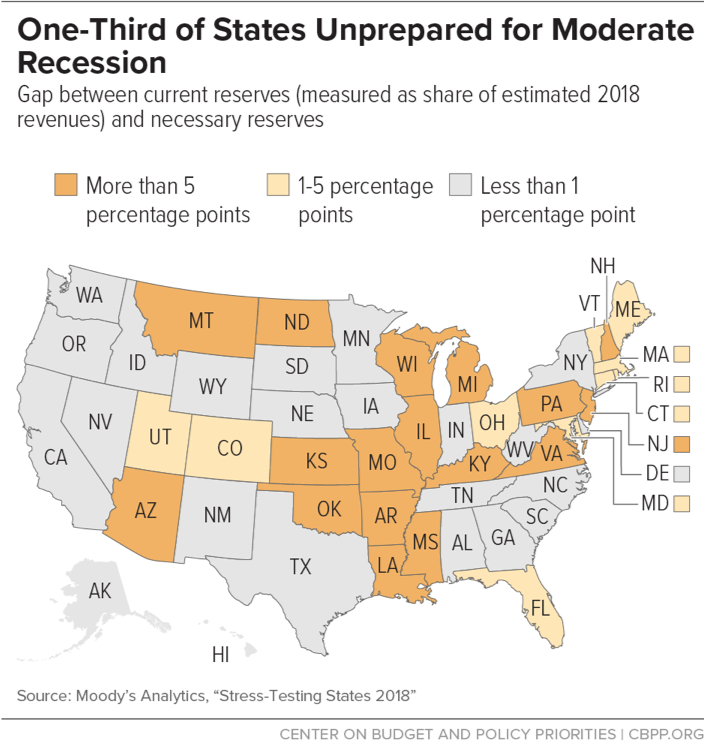 Rainy day funds have proved their worth; in each of the last two recessions, they enabled states to avert over $20 billion in service cuts, tax increases, or both. Yet these reserves filled only a modest share of states’ budget gaps, so states would have weathered the storms better with bigger rainy day funds.

Adequate reserves are essential for states to maintain their role in building a strong, equitable economy.

Budgeting for the Future: Fiscal Planning Tools Can Show the Way

September 24, 2014
PreviousIn Case You Missed It...
NextMedicare Advantage Upcoding, Overpayments Require Attention
Stay up to date
Receive the latest news and reports from the Center