| By Elizabeth McNichol
Kansas these days offers a host of lessons of what not to do when managing state finances.  We’ve already noted one:  don’t enact unaffordable tax cuts.  Kansas’ massive income tax cuts have left it on the verge of a major fiscal emergency, as a Washington Post editorial pointed out.  Here’s another:  don’t go without a formal “rainy day” reserve fund.  Kansas is one of only four states without one, which helps explain its current troubles. Kansas’ tax cuts caused a revenue decline so severe that the state, in order to pay for this year’s spending, drew on fund balances intended to provide a temporary financial cushion during economic downturns or other unexpected events.  That’s highly imprudent.  When the next downturn hits, Kansas will have little or no cushion to draw on, forcing tax increases or deeper cuts to schools and other public services — on top of the major cuts Kansas imposed due to the recession — when the state economy already is weakened. If those balances had been held in a well-designed rainy day fund, with specific rules on when the state must make deposits and when (and for what purposes) it can make withdrawals, the fiscal irresponsibility of using these one-time funds to pay for permanent tax cuts would have been more apparent.  Lawmakers might have faced up to the tax cuts’ likely fiscal damage much earlier, by suspending them or even by not enacting them in the first place. To be sure, Kansas law does require the annual budget to include a cushion equal to 7.5 percent of spending. But that’s not the same as a rainy day fund. Lawmakers have often suspended that requirement in recent years, including this year.  Even when in effect, that cushion is too small; the average state needs a fund of 15 percent or more to weather a moderate recession. Other states can learn these lessons about reserve funds from the Kansas experience:
Image 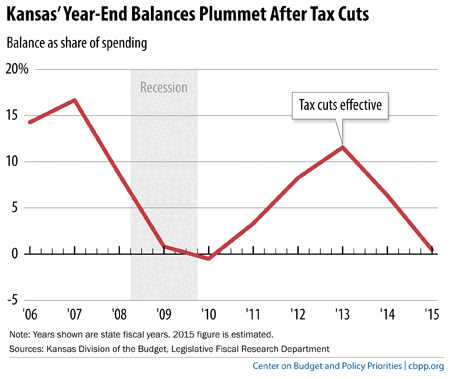 Share
Facebook Twitter Print Email
Previous[Revised] Key Lawmaker’s Bill Would Raise Rents on Poor While Lowering Them for Better-Off Households
Next5 Takeaways From Last Week’s Figures on Poverty, Inequality, and Health Coverage
Stay up to date
Receive the latest news and reports from the Center