Having a safe, stable place to call home is foundational to well-being and critical for children’s development. Unfortunately, housing assistance is woefully underfunded, leaving millions of children unhoused, moving from home to home, or living in precarious situations. This lack of resources intersects with the country’s history of racist policies in housing and beyond that, have robbed people of color of opportunity to build wealth, leaving them more likely to be renters, have low incomes, and face housing hardship. Legislation that includes critical housing resources, particularly funding for new Housing Choice Vouchers, would help address existing racial inequities and support young children’s well-being.

Because housing instability has been shown to negatively impact children’s health, development, and school performance, providing safe homes for kids and their families through new vouchers and other affordable housing investments would also strengthen the positive developmental impacts of proposed investments in preschool and child care. 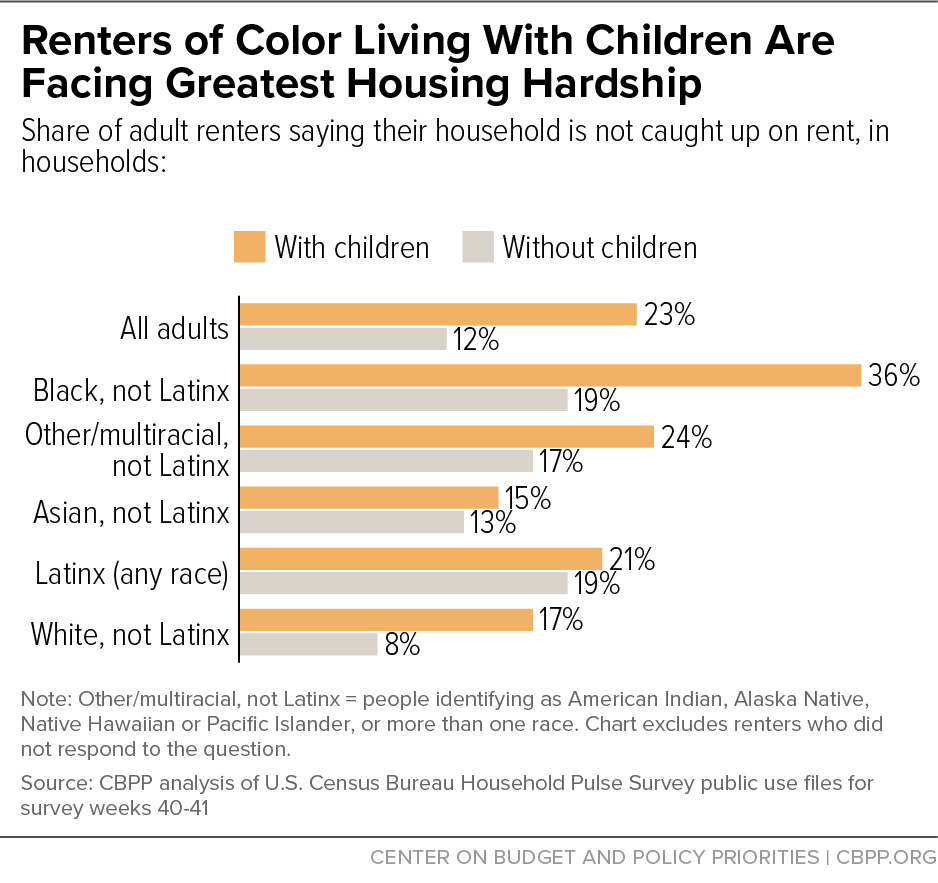 While the pandemic has undoubtedly exacerbated hardship for children and their families, many were already experiencing housing instability. Before the pandemic, nearly 8 million children were in low-income families who spent more than half of their income on rent and utilities. In fact, the number of people in families with children experiencing unsheltered homelessness increased from January 2019 to January 2020 for the first time since communities nationwide began collecting these data for their annual point-in-time counts (this is the most recent count that includes unsheltered homelessness). The 2020 annual count also found that more than half (53 percent) of all families with children experiencing homelessness were Black. In shelters, nearly half of children, and about 1 in every 3 people in a family with children, were under age 5, the most recent data available show.

A broad body of research links homelessness, housing instability, overcrowding, and poverty to adverse effects on young children’s health, development, and future school performance. Frequent, prolonged, or acute hardship in early childhood can permanently affect development of the brain and related systems. Housing instability creates significant stress for all members of the household and can strain relationships between adults and children or other adults.

Research also shows that infants in families experiencing homelessness were more likely to develop physical health problems, including respiratory problems and low birth weight, compared to infants in housed families. These problems often persisted for several years, with asthma diagnoses and emergency room visits remaining higher through age 6. Families with children experiencing housing instability accrued $8 billion in avoidable health care and education costs in 2016, one estimate found. Other forms of housing instability, such as evictions and doubling or tripling up with other families, can force families to move frequently, which is linked to attention and behavioral problems among preschool children.

Due to racist policies and discriminatory systems, the impact of these hardships falls primarily on children of color, perpetuating the country’s long-standing racial disparities.

Only one-quarter of the millions of families with children who experience housing hardship receive rental assistance. To better support young children in low-income families and address inequities, Congress should significantly expand the Housing Choice Voucher program. The voucher program reduces homelessness, housing instability, overcrowding, and poverty and has far-reaching positive effects for children and families. For example, children whose families are experiencing homelessness and receive vouchers to rent housing are less likely than a control group to be placed in foster care or to experience sleep disruptions and behavioral problems. By lowering rental costs, vouchers also enable people with low incomes to spend more on other basic needs such as food and medicine, as well as on goods and services that enrich their children’s development.

The Build Back Better Act, as passed by the House, includes a Housing Choice Voucher expansion that would serve about 300,000 extremely low-income households after phase-in, including about 80,000 vouchers for households experiencing or at risk of homelessness. We estimate this expansion would help about 274,000 children and their families and that more than 70 percent of people served would be people of color. These additional vouchers would lift about 250,000 people, including 90,000 children, above the poverty line. As lawmakers seek a compromise agreement on Build Back Better, they should retain meaningful investments in vouchers and other well-targeted housing assistance, which would substantially reduce severe hardship. Congress should also pass the House’s current fiscal year 2022 appropriations proposal, which includes a 125,000-voucher increase.

Policymakers must take advantage of the opportunities before them to help hundreds of thousands of children and take a critical step toward ensuring that the millions of children, their families, and other households facing housing insecurity have a safe and affordable place to live.

September 8, 2021
PreviousIn Case You Missed It…
NextFinal Rule for Spending Pandemic Fiscal Aid Creates Opportunities and Risks
Stay up to date
Receive the latest news and reports from the Center