SNAP (food stamps) responds quickly to increased need, such as during economic downturns and natural disasters, and the economic crisis spurred by COVID-19 is no exception. Indeed, the rise in the number of SNAP participants in recent weeks is unprecedented, with 2 million (14 percent) more people accessing benefits between February and April in the 17 states that have posted such data.

The increases across these 17 states vary substantially. At the high end: Michigan, Kentucky, Indiana, and Florida saw 20 percent or higher growth. Caseloads grew by about 5 percent in other states such as Kansas, Louisiana, Maine, and South Carolina. (The other states that posted SNAP participation figures are Arizona, Iowa, Missouri, North Carolina, Oregon, Tennessee, Texas, Virginia, and Wisconsin. Our paper on online SNAP resources includes links to the data on each state’s website.) These 17 states include about 40 percent of all SNAP households. In July the Agriculture Department will publish April SNAP participation data for all states.

These increases are unprecedented: during and after the Great Recession of a decade ago, SNAP participation rose by no more than 4 percent over any two-month period (excluding months in which large disaster SNAP programs, with more people eligible to participate, were in place). SNAP participation in all of these states is still substantially lower than during the peak months after the Great Recession, suggesting that SNAP caseloads could rise for some time. But SNAP caseloads also shrink when the economy is strong, as they did in the years leading up to the COVID-19-related downturn.

The reasons for state variation in caseload growth will become clearer as more information becomes available. Some factors include: 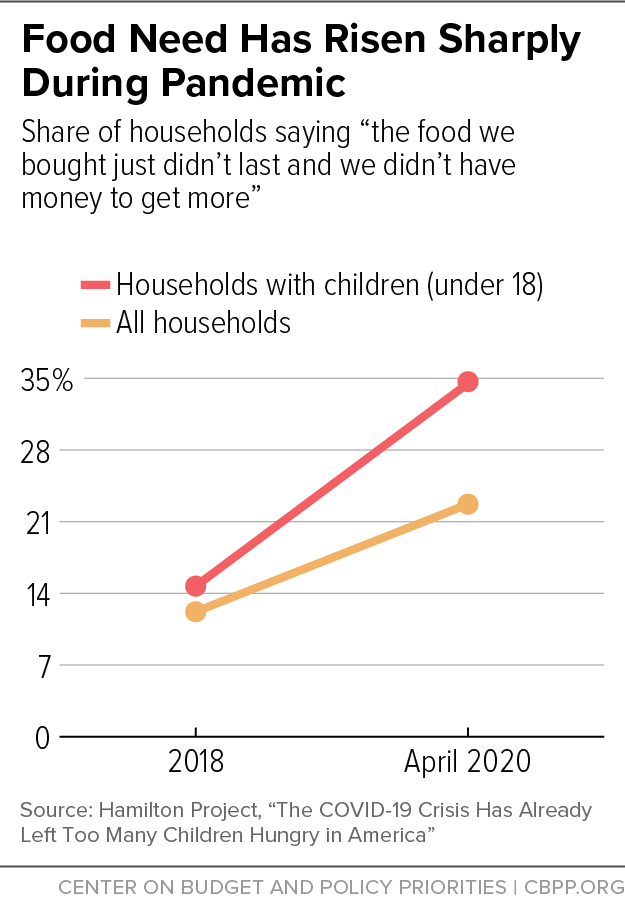 SNAP reaches a broad cross-section of low-income Americans, including many families with children, households with members who are elderly or have a disability, and other low-income adults. It’s a valuable tool to minimize the damage that the downturn is doing to households across the country, as other early data reveal rapidly rising food needs (see chart), especially among people of color and families with children. These are among the many reasons why it’s important that policymakers boost SNAP benefits by 15 percent, as the House-passed Heroes Act would do. Such an increase would not only help reduce poverty and hunger but serve as good economic stimulus to help revive the economy, with every SNAP dollar invested potentially returning $1.50 in economic spending.

May 22, 2020
PreviousProjected State Shortfalls Grow as Economic Forecasts Worsen
NextNew Videos Show Why SNAP Matters Now More Than Ever
Stay up to date
Receive the latest news and reports from the Center