The effort to repeal the Affordable Care Act (ACA) has followed a recurring pattern:  congressional Republican leaders introduce a bill that Congressional Budget Office (CBO) analysis subsequently shows to be extremely damaging. GOP leaders then make some changes to the bill that they claim have fixed the problems, but further CBO analysis reveals that isn’t the case.  We’re likely to see more of the same this week.  This time, however, there’s a risk that the damaging bill could be signed into law before CBO issues an analysis showing its true impact.

Here’s how the process has unfolded several times in recent months:  First, Republicans offer a version of their legislation that includes the same structural features: deep cuts to Medicaid, less financial assistance to people purchasing health insurance on the individual market, measures that undermine the ACA’s guarantee that people with pre-existing conditions can buy affordable coverage that meets their needs, and tax cuts for the wealthy and corporations.  Next, CBO finds that the legislation would result in at least 20 million people losing coverage, millions more facing higher costs, and people with pre-existing conditions being placed at risk.  Finally, congressional Republican leaders promise that the next version of the bill will solve these problems — only to repeat the process over again.

In most of these cases, the CBO scores — showing large coverage losses and significant out-of-pocket cost increases (see chart), effectively debunking Republican talking points — have temporarily stalled the legislation.  But in May, the House leadership passed its health bill after unveiling changes that it claimed fixed the bill — but before CBO had time to analyze the revised measure.  Once CBO did, it concluded that those fixes made little difference to the harm the bill would do, as described below.  It appears that Senate leaders may be planning to use the same approach — pass a series of amendments and then immediately proceed to a vote on final passage without a CBO analysis of the legislation’s impact, which likely would show that the newest version again fails to do what has been promised. 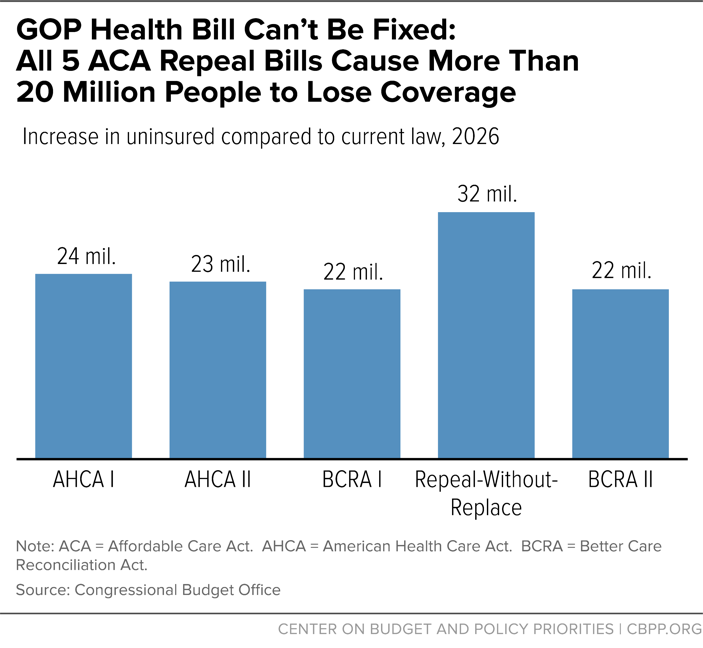 We can see how that might unfold this week.  On Tuesday, the Senate could move to a procedural vote to begin floor consideration of a bill — even though, as Senate Majority Whip John Cornyn has said, knowing what version of the legislation they’re pursuing is a “luxury we don’t have.”  A vote on final passage of a bill could then come as soon as Thursday, with the final legislative text made available only shortly before the vote — and without a full CBO analysis of the impact on coverage and on premiums and deductibles.  Once again, congressional leaders may promise that the bill has been “fixed” — with the information needed to assess that claim not available until after the vote (see table).

July 15, 2017
Stay up to date
Receive the latest news and reports from the Center