By potentially reviving a version of a vetoed 2015 bill to repeal most of the Affordable Care Act (ACA) without a replacement, Senate Majority Leader Mitch McConnell may put up for debate legislation that — a Congressional Budget Office (CBO) analysis from today shows — would cost even more people their health coverage, raise premiums in the individual market even higher, and inflict even more damage to insurance markets than prior ACA repeal bills that have failed to gain enough support in the Senate to pass.

The debate over the ACA’s future has brought greater attention to the importance of the ACA Medicaid expansion (and Medicaid in general), ACA subsidies that help low- and moderate-income people pay for coverage, and ACA provisions that keep premiums affordable while protecting people with pre-existing conditions. A “repeal-without-replace” bill simply includes worse versions of many provisions that several Senate Republicans have already rejected.  Indeed, today’s CBO report is the fifth such analysis of an ACA repeal bill so far this year to show that at least 20 million people would lose coverage and millions more would face higher costs. 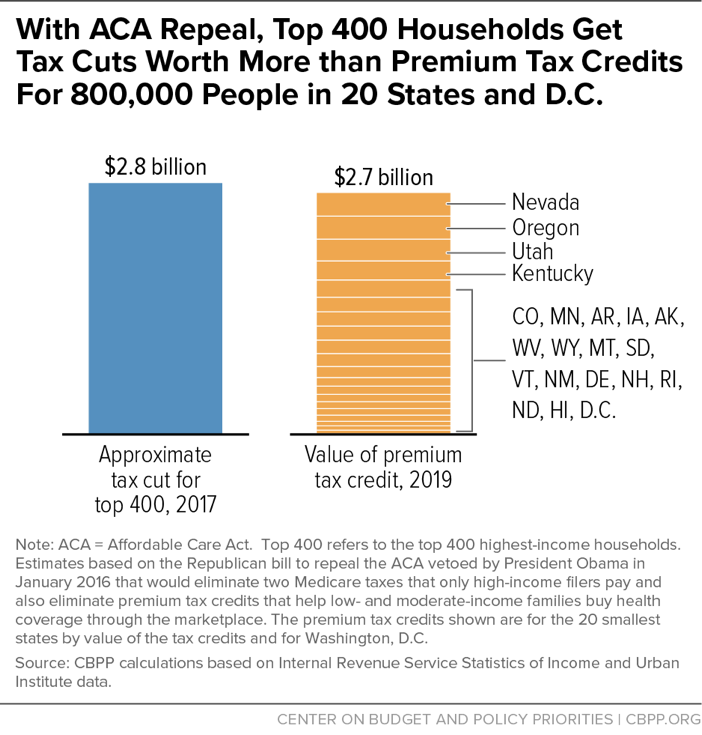 Repeal-without-replace would make it virtually impossible to pass a future replacement bill. The Republican repeal plan supposedly aims to create pressure for a replacement bill within two years, when the ACA’s provisions expanding Medicaid and helping families afford individual market insurance would end. But the past six months have shown that Republicans can’t craft a replacement plan that wouldn’t cause millions to lose coverage and millions more to pay higher costs relative to the ACA.

Moreover, a repeal-without-replace bill would make any subsequent replacement much harder by repealing hundreds of billions of dollars in taxes that helped fund the ACA’s coverage expansions. With these taxes repealed, any coverage provisions to replace the ACA’s subsidies and Medicaid expansion, including even the highly inadequate tax credit under the latest version of the Senate bill, would require large new offsets — that is, congressional Republicans would need to raise taxes significantly or find deep new spending cuts elsewhere to undo the damage from the repeal bill.

A repeal-without-replace bill would exacerbate the harm that Republicans are already causing to the individual market. Contrary to Republican claims, recent data show that the individual market would be increasingly stable and profitable for insurers if not for the Trump Administration’s efforts to sabotage the ACA. As CBO found, a repeal-without-replace bill would cause markets to begin unraveling almost immediately, with large premium spikes, insurer withdrawals, and coverage losses even before the repeal provisions took full effect. As CBO explains, they “expect that insurers in some areas would leave the nongroup market in 2018. They would be leaving in anticipation of further reductions in enrollment and higher average health care costs among enrollees who remained after the subsidies for insurance purchased through the marketplaces were eliminated. As a consequence, roughly 10 percent of the population would be living in an area that had no insurer participating in the nongroup market.” That would accelerate and deepen the problems that the individual market is facing due to Administration actions.

July 13, 2017
PreviousAnother Argument for ACA Repeal Bites the Dust
NextHouse Budget Would Cut Non-Defense Programs to Historic Lows
Stay up to date
Receive the latest news and reports from the Center