States remain in dire straits due to the COVID-19 pandemic and resulting economic crisis; we estimate that their budget shortfalls will total $555 billion over state fiscal years 2020-2022. These figures underscore the continued urgency of the President and Congress enacting substantially more fiscal relief and maintaining it for as long as economic conditions warrant.

Here are some recent CBPP pieces detailing the need for state fiscal relief, the harmful budget cuts states are already beginning to make, and why recent proposals from Senate Republicans are severely inadequate.

States Continue to Face Large Shortfalls Due to COVID-19 Effects
We now project that the state budget shortfalls expected from COVID-19’s economic fallout will total a cumulative $555 billion over state fiscal years 2020-2022. 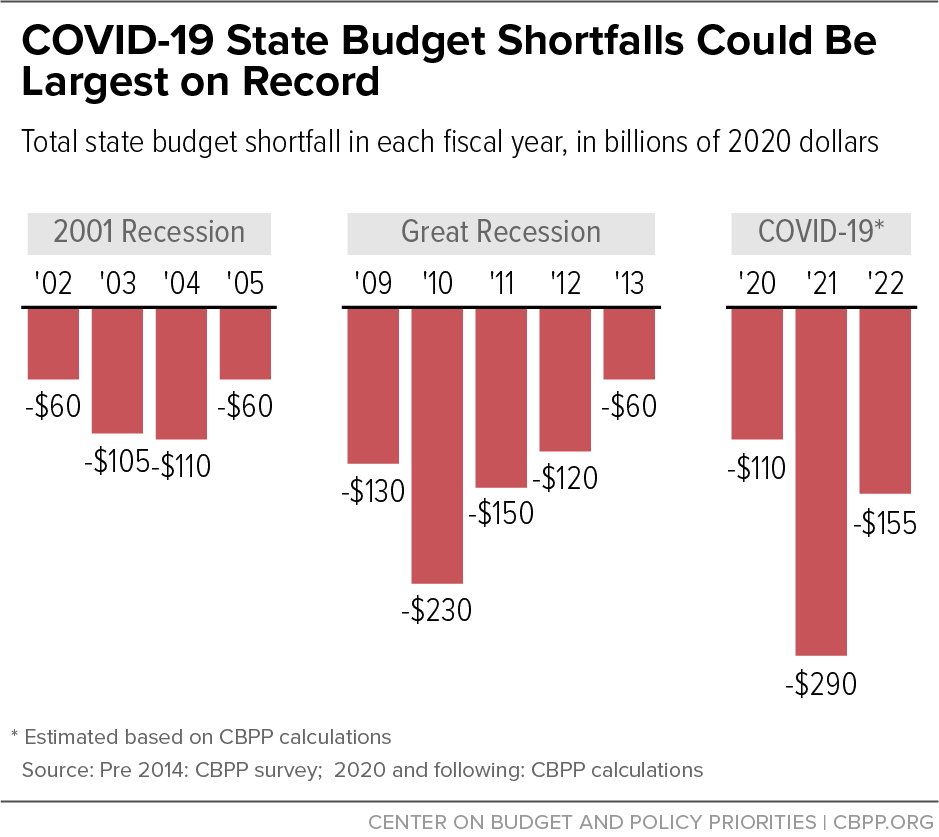 States Grappling With Hit to Tax Collections
This piece collects preliminary 2020 and 2021 revenue projections for many states, which paint a clear picture of a severe and widespread state budget crisis.

States, Localities Need More Federal Aid to Avert Deepening Budget Crisis
As states revisit their spending plans for the 2021 budget year, which began July 1 in most states, they are making deep budget cuts to offset huge revenue shortfalls triggered by COVID-19 and the worst economic downturn since the Great Depression.

With Need Rising, Medicaid Is at Risk for Cuts
A number of states have made or are considering Medicaid cuts, including reductions in provider payments, reversals of planned and needed coverage improvements, and furloughs and hiring freezes impacting eligibility workers. States are also cutting behavioral health programs, and, even in the midst of a pandemic, are cutting their public health budgets.

Additional, Well Targeted Federal Fiscal Aid Key to Advancing Racial Equity
Unless federal policymakers provide enough aid to states, localities, territories, and tribal governments to offset all or nearly all of their massive revenue losses due to the pandemic, the longstanding inequities from historic and ongoing racism and discrimination — which have left Black and brown communities most harmed by COVID-19 and the economic crisis — will only worsen from the deep cuts in public services that these governments might have to make.

Senate Republicans Only Offer States Nearly Meaningless “Flexibility”
The Senate Republicans’ reported economic relief plan contains no new fiscal aid for states and localities, whose revenues have collapsed due to COVID-19 and the resulting recession. While the plan reportedly trumpets the added “flexibility” that it provides for states and the most populous cities and counties, letting them use previous federal aid to offset their revenue losses, most of that aid is already spoken for or available for this purpose.

Senate Republicans’ Out-of-Touch Plan Would Pressure Schools to Reopen
Amidst an unprecedented state and local fiscal crisis, Senate Republicans reportedly may offer only one form of new federal fiscal aid to states and localities in the next economic relief bill: funding for schools, but only if they reopen for in-person classes. It’s hard to imagine a plan that’s more out of touch with current realities.

State Borrowing No Substitute for Additional Direct Aid to Help States Weather COVID Downturn
Contrary to suggestions by Treasury Secretary Steven Mnuchin and others, borrowing is not a viable substitute for the substantial direct aid states need to offset their sharp revenue declines and cost increases stemming from COVID-19.

COVID-19: Responding to the Health and Economic Crisis

PreviousHUD 2021 Funding Bill Should Include Affordable Housing, Anti-Homelessness Investments
NextEconomic Relief Package Must Include Housing Supports
Stay up to date
Receive the latest news and reports from the Center