President Biden’s American Jobs Plan, which would finance high-return infrastructure investments partly by undoing some of the dramatic 2017 corporate tax cuts, would make the tax code fairer and raise substantial revenue without undermining economic growth. Our newly updated paper has the details, including analyses from Moody’s Analytics and International Monetary Fund (IMF) researchers with further evidence on the equity and growth benefits of this approach.

The 2017 law slashed the corporate rate from 35 to 21 percent. The Jobs Plan would raise the rate to 28 percent and reduce tax incentives for companies to shift profits and investments overseas.

Critics of progressive tax changes like these often don’t acknowledge the benefits of the investments that the added revenue makes possible. In contrast, a recent analysis by Mark Zandi and Bernard Yaros of Moody’s Analytics estimated the combined effects of the Jobs Plan’s infrastructure investments — in broadband, roads and bridges, and research and development — and its corporate tax increases. Using a model similar to those used by the Congressional Budget Office and Federal Reserve Board, they found that:

The net positive economic effects arise from the large returns to infrastructure investments and modest impacts of partially undoing of the 2017 corporate tax cuts. “Long term, economic research is in strong agreement that public infrastructure provides a significantly positive contribution to GDP and employment,” the Moody’s report explained. Yet combined federal, state, and local infrastructure investment has fallen for more than half a century, according to the report, from around 6 percent of GDP in the 1950’s and 1960’s to under 1 percent today. 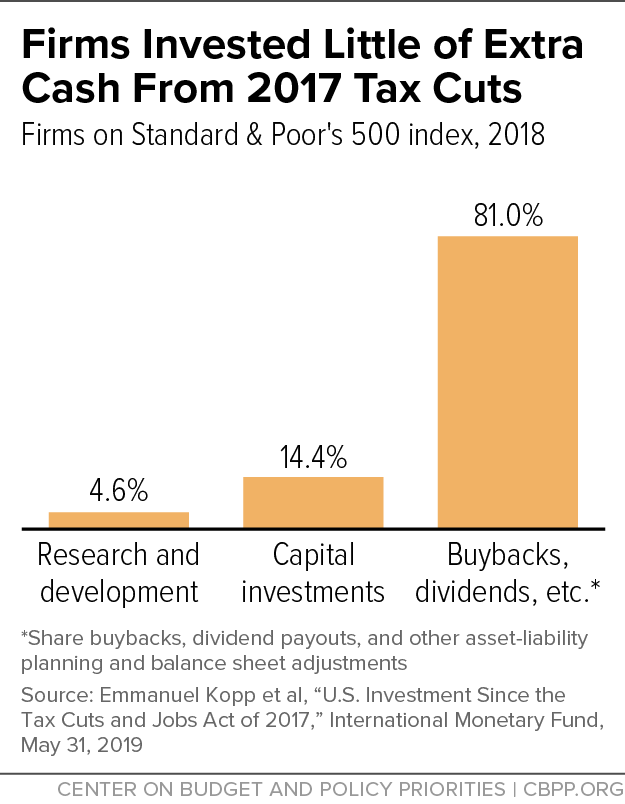 Opponents’ claims that the corporate tax increases to fund the Jobs Plan investments would stifle economic growth are unconvincing. The 2017 tax cuts were massive but the economic benefits have been hard to find. “GDP growth did not increase following the 2017 tax law: it was 2.4 percent in the eight quarters leading up to the law and 2.4 percent in the eight quarters since the law,” Jason Furman, chairman of President Obama’s Council of Economic Advisers, testified last year. Close scrutiny of investment, employment, and wages likewise shows little or no bounce from the tax cuts. As Zandi and Yaros explain:

[T]here is little evidence that the [2017 tax law] meaningfully increased underlying investment. Instead much of the tax windfall went into share repurchases and bigger dividends. If the tax cuts did not lift economic growth, it is tough to argue that increasing them will appreciably hurt growth.

An IMF study detailed the rise in share buybacks after the 2017 law, which largely enriched affluent shareholders by boosting the shares’ price. (Ownership of corporate shares is highly concentrated among the wealthy: the top 10 percent of households own $1.7 million of stock apiece, on average, while the bottom 50 percent own about $11,000.) It cited a survey of firms showing that just 11 percent of businesses reported accelerating investment because of the 2017 tax cuts. Examining data for firms on the Standard & Poor’s 500 index, the IMF researchers asked, “Where then have firms put the incremental free cash from the [tax cuts]?” and answered that “much of the remainder was used for share buybacks, dividend payouts, and other asset-liability planning and balance sheet adjustments.” (See graphic.)

Corporations that operate in the United States derive considerable benefit from the federal government. They rely heavily on our roads, airports, and ports to move their goods and employees, and they benefit from the large spillover effects of government-funded research and development. By asking profitable corporations to pay more for these services and to fund new public investments with broadly shared benefits, the American Jobs Plan would help create a more equitable nation.

Biden Proposals Would Reduce Large Tax Advantages for Those at the Top, Address Tax Gap

May 24, 2021
PreviousIn Case You Missed It...
NextLarge-Scale Investment in Rental Assistance Needed for Equitable Recovery
Stay up to date
Receive the latest news and reports from the Center