North Carolina voters will decide in November whether to tighten the cap on the state’s income tax rate, which would make it harder to fund schools, health care, and other public services while overwhelmingly benefiting the state’s wealthiest families.

The ballot measure would amend the state constitution to reduce the cap on North Carolina’s personal and corporate income tax rates from 10 percent to 7. That’s higher than the current top tax rates but lower than where the rate for the state’s wealthiest families was historically.

North Carolina is already on a path to serious fiscal instability (see chart) due to years of income tax cuts that have mainly benefited the wealthy and done little to boost the economy. While the ballot measure wouldn’t immediately change the state’s tax code, it would leave future policymakers in a bind. The income tax is North Carolina’s primary revenue source, so if they wanted to improve the state’s beleaguered school systems, help more people get medical care when they need it, or make other investments that residents and businesses demand, they might not be able to. 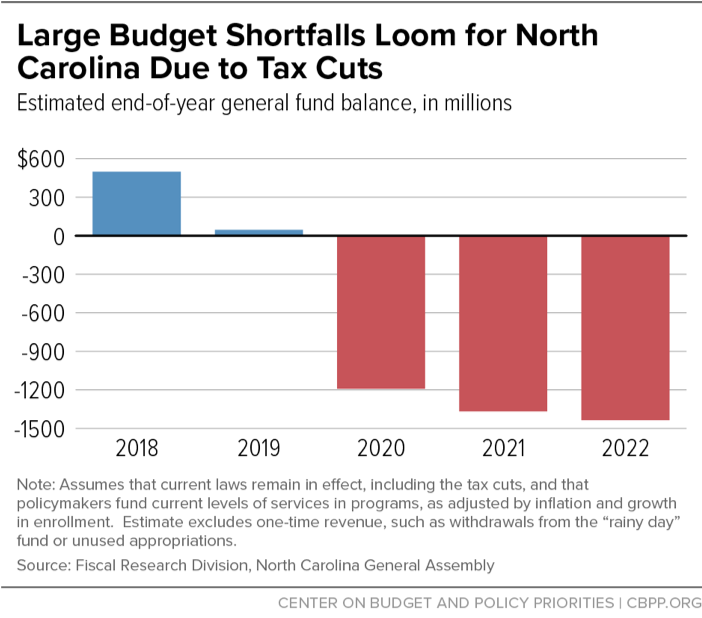 Further, with income taxes capped, policymakers would likelier pay for public investments by raising sales and property taxes, which fall harder on people with less income. If so, the state’s tax system would favor the wealthy even more. Like the vast majority of states, North Carolina’s tax system asks more of the poorest residents than of the wealthiest, as a share of income.

In the early 2000s, North Carolina had two personal income tax brackets over 7 percent: 7.75 percent for income over $100,000 for joint filers ($60,000 for single filers) and 8.25 percent for income over $200,000 ($120,000 for single filers). Restoring those two top rates — a step the ballot proposal would prohibit — would raise about $2.4 billion a year, according to the North Carolina Budget & Tax Center. More than half the benefits of retaining the current rates, rather than restoring those higher top two brackets, would flow to the top 1 percent.

Moreover, there’s no reason to believe that capping income tax rates boosts economic growth. The large majority of research finds no relationship between state personal income tax levels and economic growth, and the real-world experiences of state after state bear this out (take Kansas, for example).

That’s because states must balance their budgets, so they have to pay for reduced taxes by cutting services, raising other taxes, or both — slowing the economy and offsetting any economic benefit of the tax cuts. What’s more, state and local taxes help pay for public services that households and businesses want and need. And other factors — like national and international economic trends, a state’s natural resources, the education of its workforce, and its proximity to major markets — are much more important to a state’s economic growth.