Millions Still Months Behind on Rent After Eviction Moratorium Ends

Weeks after the federal eviction moratorium ended, the latest Census data show an estimated 9.9 million adult renters are living in households at least one month behind on rent, and over 4 in 10 adults behind on rent believe eviction is at least somewhat likely in the next two months. States and localities must act swiftly to protect millions of these renters from losing their homes by employing eviction diversion programs that provide legal representation and help emergency aid reach households struggling to pay rent. And Congress can help prevent future eviction crises by including a major expansion of the Housing Choice Voucher program in recovery legislation to make housing safe and affordable for people most at risk of eviction.

The Supreme Court in late August rejected the last in a series of eviction moratorium extensions by the Centers for Disease Control and Prevention (CDC). And in the two weeks ending September 13, nearly 3.7 million adult renters reported being in a household that was one month behind on rent, data from the Census Bureau’s Household Pulse Survey show. Over 2.8 million were two months behind, another 1.2 million were three months behind, and, representing the most severe cases, 2.2 million adult renters reported that their household was four or more months behind on rent. (See graph.)

The number of adults behind on rent has fallen from a January 2021 peak of 15 million people but has remained above 10 million people since the end of March. An estimated 11.9 million adults living in rental housing were still not caught up on rent in early September, and the vast majority of them (9.9 million) were in households one or more months behind. Over 4 in 10 of those behind on rent, 5 million, believe eviction is somewhat or very likely in the next two months. 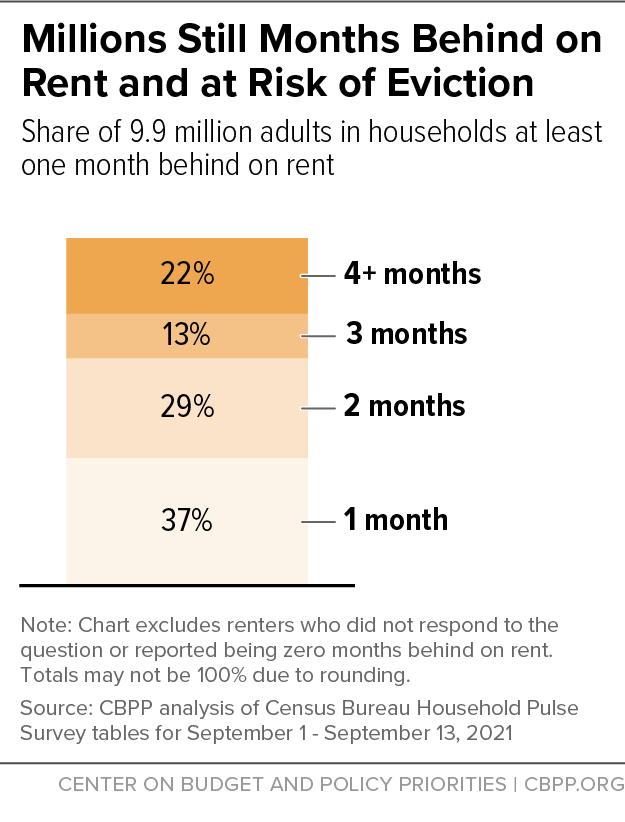 The Supreme Court’s ruling creates a particular risk of eviction for families still recovering from the pandemic’s economic fallout. Renter households with a COVID-related job loss owe an average $8,200 in back rent, the Federal Reserve Bank of Philadelphia estimates. While a patchwork of state and local moratoriums remains in parts of the country, most people behind on rent now have no protection against being forced from their homes. Some 53 percent of renter households live in states and localities without any form of eviction moratorium, according to the Urban Institute.

While in place, the CDC moratorium provided critical protections for renters accruing debt from back rent and late fees due to COVID-19, effectively averting a surge in evictions. Princeton’s Eviction Lab estimates that the CDC moratorium helped prevent 1.55 million evictions nationwide over the past 11 months. As national protections lapse, the imminent wave of evictions will disproportionately displace Black and Latino renters, reflecting unequal access to stable housing due to longstanding racial disparities in education, employment, and housing opportunities.

The December relief package and the American Rescue Plan included over $46 billion in emergency rental assistance, but only a fraction of the funds has reached households struggling to pay rent. Many states and localities didn’t have systems in place to distribute these funds, preventing much of the aid from quickly reaching renters in need. As of August, 30 percent of the initial $25 billion tranche of funding has been spent, latest Treasury data show. Over 1.4 million households received emergency rental assistance between January and August 2021, leaving millions of renters behind on rent still at risk of eviction. Adopting emerging best practices, such as simplifying application processes by increasing documentation flexibility and engaging landlords to boost program participation, would accelerate distribution of emergency aid to at-risk renters.

Protecting households from the immediate eviction crisis requires swift action, including rapid distribution of remaining emergency aid along with the implementation of broader eviction diversion programs. Beyond that, a major expansion of the Housing Choice Voucher program is the single most important way to help people with low incomes afford housing on an ongoing basis and to prevent future eviction spikes following economic and public health crises. Congress has an opportunity to sharply expand the voucher program and other needed housing assistance through Build Back Better legislation, a step that would reduce housing instability and homelessness while also strengthening other recovery agenda investments. Doing so is imperative to ensuring all people have safe and affordable housing.

September 23, 2021
PreviousClosing Coverage Gap and Making Premium Subsidies Permanent Could Cover 7 Million Uninsured
NextIn Case You Missed It...
Stay up to date
Receive the latest news and reports from the Center