Legislation Would Boost EITC, Child Tax Credit for Millions of People With Disabilities

On the 29th anniversary of the landmark Americans with Disabilities Act, it’s worth noting that major pending tax legislation would improve the economic circumstances of millions of people with disabilities. Some 4 million working people with disabilities and more than 2 million children with functional limitations would benefit from the Working Families Tax Relief Act’s improvements to the Earned Income Tax Credit (EITC) and Child Tax Credit.

The bill, introduced this year in the Senate by Sherrod Brown, Michael Bennet, Richard Durbin, and Ron Wyden (with 42 co-sponsors) and in the House by Dan Kildee and Dwight Evans, would expand the EITC for families with children by roughly 25 percent. It would also substantially strengthen the very small EITC for workers who aren’t raising children in their homes — the sole group that the federal tax code now taxes into, or deeper into, poverty. And it would make the Child Tax Credit fully refundable so that children in lower-income households, including those with little or no income, can benefit fully from it. This fully refundable Child Tax Credit is similar to a centerpiece policy of a National Academy of Sciences committee proposal to shrink child poverty.

The House Ways and Means Committee sought to make a down payment on these credit improvements last month when it passed Chairman Richard Neal's Economic Mobility Act, which would expand the EITC for childless adults and make the Child Tax Credit fully refundable in 2019 and 2020.

For low- and moderate-income families with children, the EITC is an anti-poverty, income-boosting powerhouse. Childless adults who work hard at low-wage jobs face the same wage pressures as their co-workers with children. Yet even for those childless adults who qualify for it, the EITC is too small to give them a substantial income lift, leaving some in this group taxed into, or deeper into, poverty.

The standard deduction, EITC, and Child Tax Credit are set at levels that ensure that families with children don’t have net income and payroll federal tax liability if they earn poverty-level wages. As a result, no families with children are taxed into poverty by the federal tax system. Single childless adults, in contrast, begin owing income tax when their earnings are below the poverty line, and they receive little or no EITC. They also face significant payroll taxes. In addition, childless adults younger than 25 and older than 64 are ineligible for the EITC. The Working Families Tax Relief Act would expand the age range to 19 to 67 and increase the maximum EITC amount from roughly $530 today to $2,100.

Consider a 25-year-old single woman with cerebral palsy who works roughly 30 hours a week in customer service and earns about $8.55 an hour. Her annual earnings of $13,340 are just at the poverty line. But federal taxes push her into poverty:

In short, federal taxes drive this woman $963 into poverty. The drafters of the Working Families Tax Relief Act made fixing this tax-code flaw a priority. Under the legislation, this woman’s EITC would rise to $1,797, and her after-tax income would thus be $662 above the poverty line. She would be one of the 5 million working childless adults who would no longer be taxed into, or deeper into, poverty. 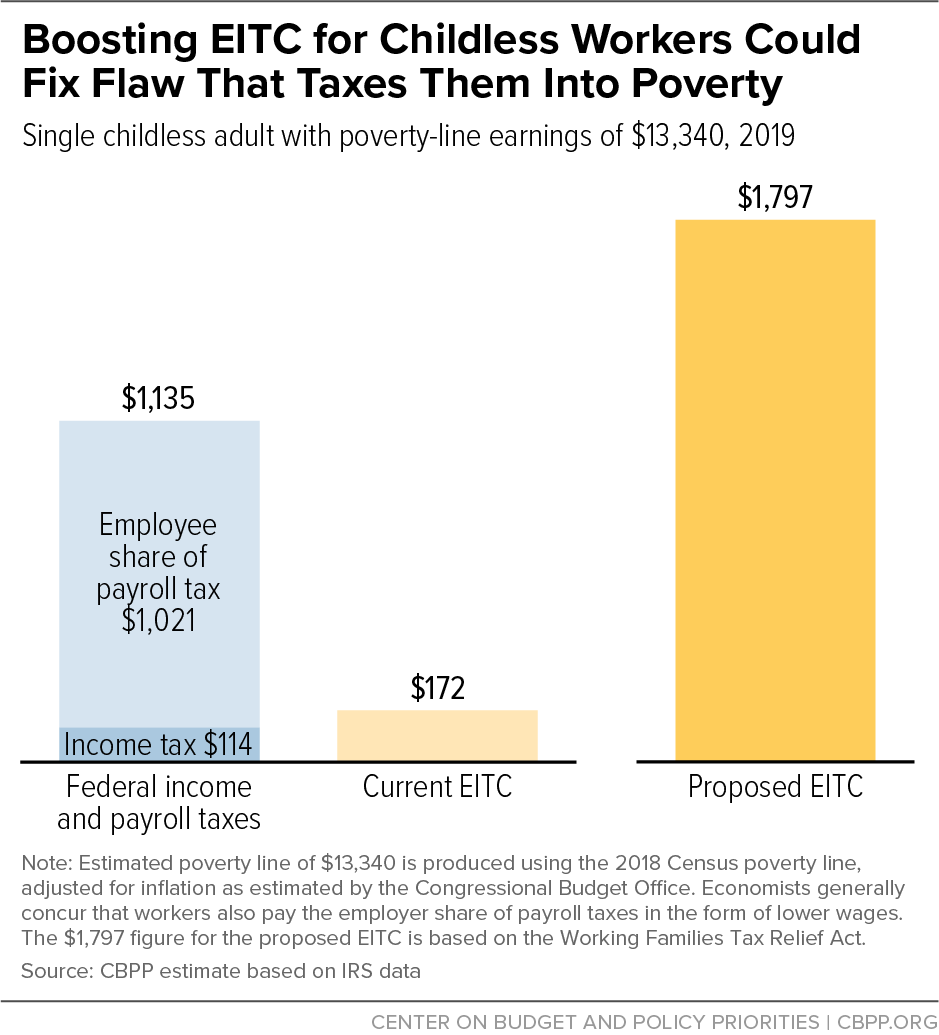 Consider a married couple in which one spouse makes $45,000 as an auto mechanic and the other spouse cares for their 5-year-old son with autism and toddler daughter without a disability. The bill would increase their EITC by about $1,460, and they also would receive an additional $2,000 from the Young Child Tax Credit, for a total gain of about $3,460.

By strengthening the EITC and the Child Tax Credit, the Working Families Tax Relief Act would deliver an income boost to families raising more than 2 million children with functional limitations.

December 10, 2019
PreviousTax Code Can Do More to Narrow Racial Gaps in Income and Wealth
NextIn Case You Missed It...
Stay up to date
Receive the latest news and reports from the Center