Kansas’ Gross Domestic Product (GDP) will grow at half the rate of national GDP in 2015, according to new projections from the state’s nonpartisan Legislative Research Department, marking another year of sluggish growth since Kansas enacted massive tax cuts meant to spur its economy.

Kansas’ huge tax cuts took effect at the start of 2013.  That year, Kansas’ economy actually shrank, even as the national economy grew.  Then, in 2014, Kansas’ economy managed some growth, but still lagged national growth.  And the state’s new projections for 2015 find that Kansas’ real GDP will grow by 1.2 percent this year, half the 2.4 percent projected nationally.  (See chart.)

To be sure, Kansas’ growth also lagged U.S. growth in 2012, the year before the tax cuts took effect.  But in five of the previous six years — going back to 2006 — Kansas grew faster than the country as a whole. 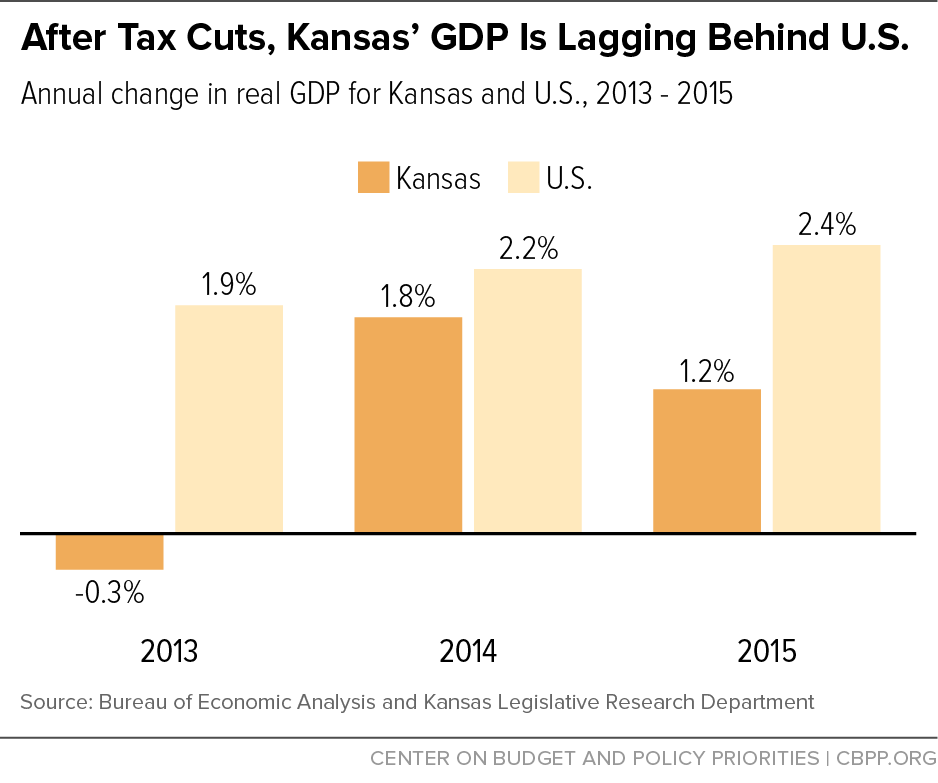 But Kansas job growth has been weak, and the hundreds of millions of dollars in revenue losses from the tax cuts have forced cuts in funding for schools and other building blocks of a strong future economy — on top of the damage that the Great Recession wreaked in the state.  And, with revenues continuing to fall short of projections, Gov. Brownback is preparing yet another round of funding cuts.

The tax cuts’ failure so far shouldn’t be a surprise.  History suggests that deep cuts in personal income taxes are a poor strategy for economic growth, and the serious academic literature typically finds little relationship between a state’s tax levels and its economic performance.  So there’s no reason to think that the tax cuts will cause Kansas’ economy to boom in the future.

Indeed, while Kansas’ new projections don’t include 2016 GDP, the Legislative Research Department does find that personal income will grow more slowly next year in Kansas than in the country as a whole ― even more evidence that the tax cuts aren’t working as advertised.

May 14, 2015
PreviousIn Case You Missed It…
NextLabor, Health and Human Services, and Education May Get Short Shrift
Stay up to date
Receive the latest news and reports from the Center