Legislation is on a fast track in Kansas — poster child of the “slash income taxes for the wealthy and everything will be great” approach — that would replace the time-tested way of supporting schools with an arbitrary one that would fall far short of meeting growing needs. And unfortunately for the nation’s students, Kansas isn’t alone in shortchanging its schools.

Under the traditional school funding formula, Kansas — and nearly every other state — bases K-12 school funding in part on the number of students in a given school district and other needs.  The Kansas legislature appears likely, perhaps as soon as tomorrow, to pass a bill to scrap that formula.  Instead, in the next two years, schools would receive an arbitrary amount based not on school needs, but simply on how much the legislature wishes to appropriate.  The bill doesn’t specify what will happen after that.  Governor Sam Brownback proposed to dump the formula, so there’s little doubt that he’ll sign the bill.

That doesn’t bode well for the state’s schools.  Because the new funding levels would not be required to keep up with enrollment changes and inflation, some schools — already hammered since the recession — would have to raise class sizes, lay off more teachers, and otherwise do less for kids (see chart). 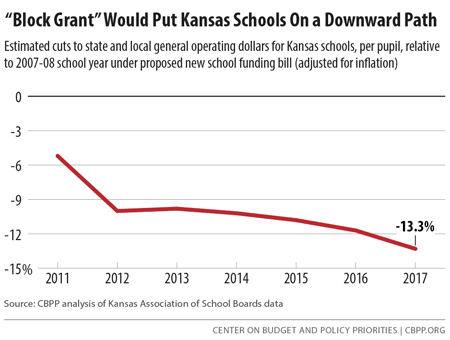 Governor Brownback and his supporters call the new funding method a “block grant.”  They claim it will give schools more “stability” since they’ll know how much funding they have to work with.  The euphemistic language obscures the truth.  In fact, the state would be undercutting its future to pay for the big tax cuts Brownback signed two years ago that went disproportionately to the wealthy.  And by lifting the legislature’s obligation to give schools the money to keep up with growing needs, the “block grant” approach will help the state pay for additional tax cuts scheduled to kick in in future years.

Kansas isn’t the only big tax-cutting state that’s shirking its obligation on education.  Last year, North Carolina — another of the big income tax-cutting states — dropped a provision in place since the Great Depression requiring the legislature to consider student enrollment changes when determining school funding.  And Wisconsin Governor Scott Walker — another champion of the “tax cuts first” approach — wants to “block grant” and sharply cut funding for the state’s higher education system.

The damage that huge tax cuts will do to these states, and by extension the country as a whole, is becoming apparent.  By charting a new, far less ambitious course for how they fund education, these states are promoting a diminished vision of our future.

5 Pieces of Context for the New Kansas Budget

K-12 Funding Remains Below Pre-Recession Levels in Most States