Kansas Governor Sam Brownback will sign legislation today to shorten the state’s time limit for Temporary Assistance for Needy Families (TANF), marking the third time in five years that Kansas has cut its time limit, which will now be 24 months.

These cuts highlight the risk of giving states control over more safety net programs.  Shortening time limits hurts the very families that need this assistance the most, research shows — those with limited work experience, low education levels, and other barriers to employment.

Proponents of Kansas’ recent TANF changes claim that parents leaving the program due to time limits are finding jobs.  But the 1996 welfare law, which created TANF, doesn’t require states to track what happens to parents after TANF, so we don’t really know how many find work or how many of those who do earn enough to support their families.

Research from Maryland, which does follow families after they leave public assistance, found that parents leaving TANF due to time limits generally work less and earn less than parents leaving for other reasons.

Kansas’s TANF program provides a very weak safety net for families with kids. During the Great Recession, which officially lasted from December 2007 to June 2009, TANF caseloads in Kansas fell by 15 percent even as unemployment rose by 73 percent.  Furthermore, since November 2011 — when Kansas first cut time limits and initiated other TANF changes, including more upfront eligibility requirements — TANF caseloads have dropped by over 60 percent.

House Speaker Paul Ryan, who sees TANF as a model for other programs, has called for handing federal control over other core safety net programs like SNAP (formerly food stamps) and Medicaid to the states.  Kansas’ repeated TANF cuts show that states often don’t act in the best interest of poor families. 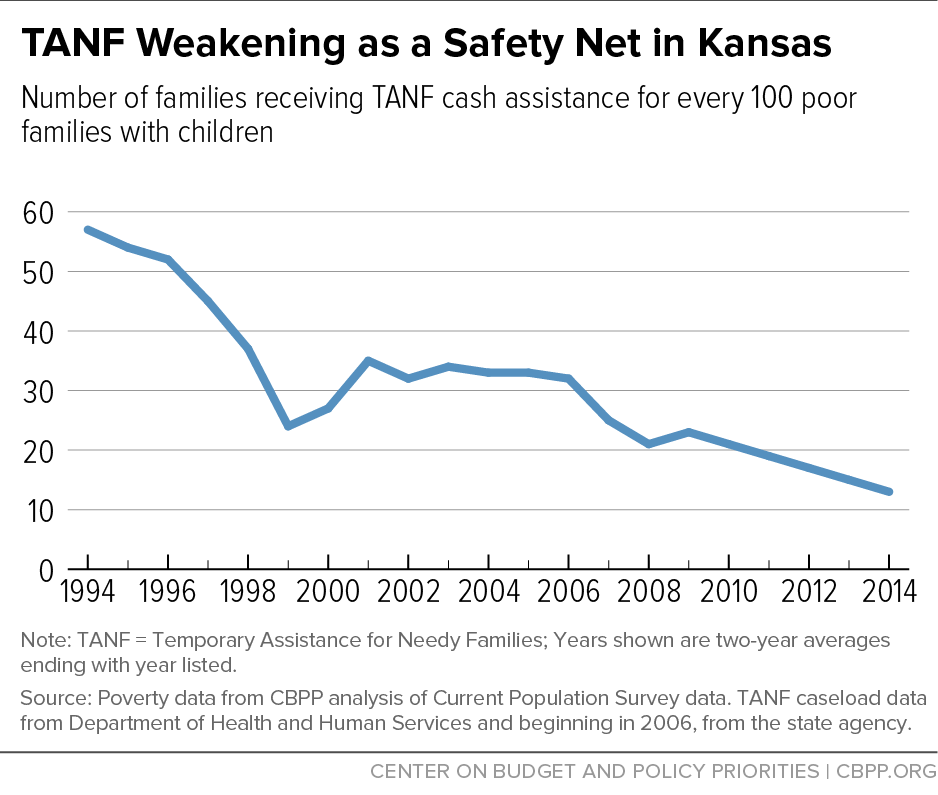 May 5, 2016
PreviousA Must-Read on Corporate Tax Reform
NextHow Many Poor Students Does a School Need to Get a Break?
Stay up to date
Receive the latest news and reports from the Center