The 49,000 jobs reverses less than a quarter of December’s 227,000-job decline, leaving total payroll employment 9.9 million jobs lower than in February of 2020. A disproportionate number of those job losses since February are in industries that pay low wages, and workers of color and those without a bachelor’s degree have lagged white workers and college graduates in recovering from last spring’s steep job losses.

While unemployment fell to 6.3 percent in January, Black and Hispanic rates, at 9.2 and 8.6 percent respectively, were significantly higher than the white rate of 5.7 percent. The Asian rate, at 6.6 percent, was also higher. The 4.0 million people unemployed long term (for 27 weeks or more) represent 39.5 percent of all unemployed workers.

Job growth has flattened. Bureau of Labor Statistics revisions to the payroll jobs data from April of 2019 forward in today’s report do not change the underlying pattern — a sharp decline in total (private plus government) jobs in March and April, a partial rebound in the next few months, but a leveling off ever since. Private employers added only 6,000 jobs to their payrolls in January. State and local government jobs grew some in January but remain 1.3 million jobs below their February level, with 957,000 of those losses in education.

Large racial and ethnic disparities in employment persist. The disparity in unemployment rates between workers of color and white workers reflect patterns that have endured in recessions and recoveries alike. They are rooted in the nation’s history of structural racism, which curtails job opportunities for Black people through policies and practices such as unequal school funding, mass incarceration, and hiring discrimination. Black workers tend to be “the last hired and first fired.” High unemployment rates for Hispanic people, which also consistently exceed the white rate, reflect many of the same barriers to opportunity.

Underscoring how unequal educational opportunities contribute to higher unemployment, workers with a bachelor’s degree or higher had a January unemployment rate of 4.0 percent compared with 7.1 percent for those who only completed high school.

The unemployment rate is an incomplete measure of joblessness because it only includes people who are actively looking for work (or have been laid off but are subject to recall to their former jobs). It doesn’t include people who want a job but haven’t been looking due to a lack of opportunities or because school and child care closures make working hard or impossible. The prime-age employment-to-population ratio — the share of the population aged 25-54 with a job — doesn’t have that shortcoming, and it tells a similar story of large, continuing racial disparities. The employment-to-population ratio was lower for Black and Hispanic workers than for white workers when the recession started and has fallen more for them since. In January the Black employment-to-population ratio was 5.0 percentage points lower than in February, the Hispanic rate was 6.8 points lower, and the white rate was 4.1 points lower. 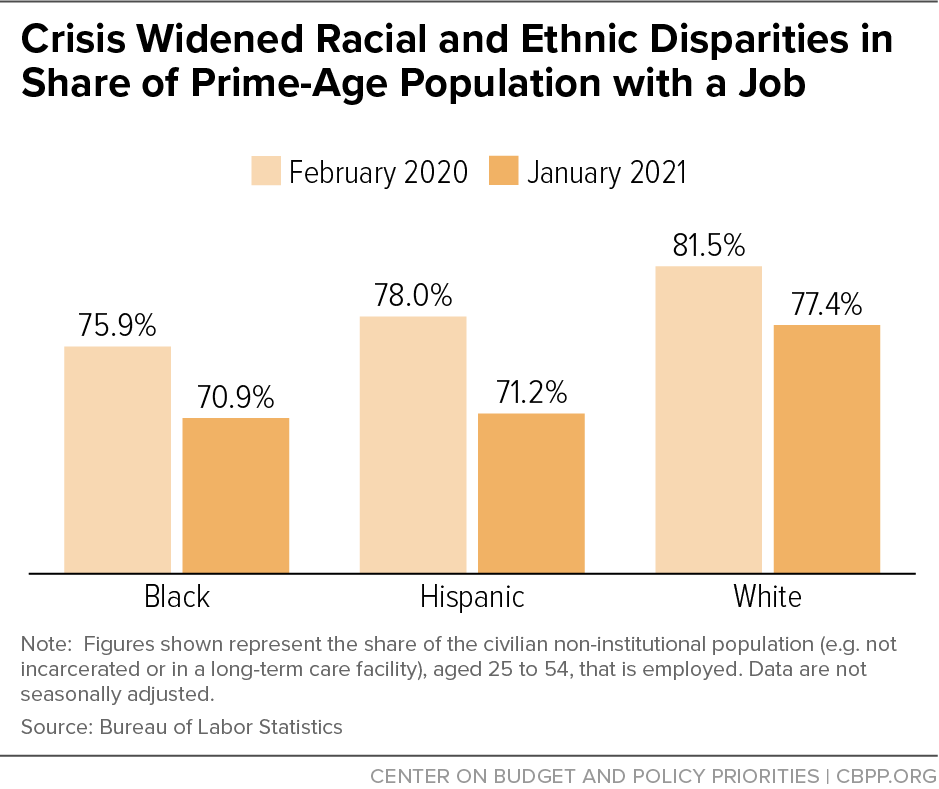 Further stimulus and relief measures needed. While the end-of-2020 stimulus and relief package was important for addressing hardship and restarting the stalled jobs recovery, its key unemployment insurance provisions are set to expire in less than two months and its food assistance expansions this summer. At that time, the jobs deficit will still be large and unemployment still elevated, especially for workers without a college degree and for workers of color. Further job market improvements will require more measures to control the spread of the virus, relieve hardship, and provide effective stimulus that boosts overall demand for goods and services.

Next Relief Package Must Be Large Enough to Fight Virus, Relieve Hardship

August 5, 2020
PreviousNew USDA Guidance Clarifies States’ P-EBT Flexibility to Mitigate Child Hunger
NextIn Case You Missed It...
Stay up to date
Receive the latest news and reports from the Center