Policy Basics: How Many Weeks of Unemployment Compensation Are Available?

Workers in most states are eligible for up to 26 weeks of benefits from the regular state-funded unemployment compensation program, although nine states provide fewer weeks, and two provide more. Extended Benefits (EB) are triggered on in two states. Additional weeks of pandemic federal benefits ended in all states on September 6, 2021.

The federal-state unemployment insurance (UI) system helps many people who have lost their jobs by temporarily replacing part of their wages. (See “Policy Basics: Unemployment Insurance.”) Under certain circumstances, unemployed workers who exhaust their regular state-funded unemployment benefits before they can find work can receive additional weeks of benefits.

Under the CARES Act responding to the COVID-19 pandemic, all states received access to federal funding to provide additional weeks of Pandemic Emergency Unemployment Assistance (PEUC) benefits to people who exhausted their regular state benefits, and Pandemic Unemployment Assistance (PUA) to many others who lost their jobs through no fault of their own but who were not normally eligible for UI in their state. These and other pandemic-related emergency UI programs ended nationwide the first weekend of September 2021, but many states stopped providing these federal benefits before that.

The map below shows the maximum number of weeks of regular plus EB benefits that are currently available in each state.

The two states providing more than the 26-week maximum are:

The states providing fewer than the standard 26-week maximum include: 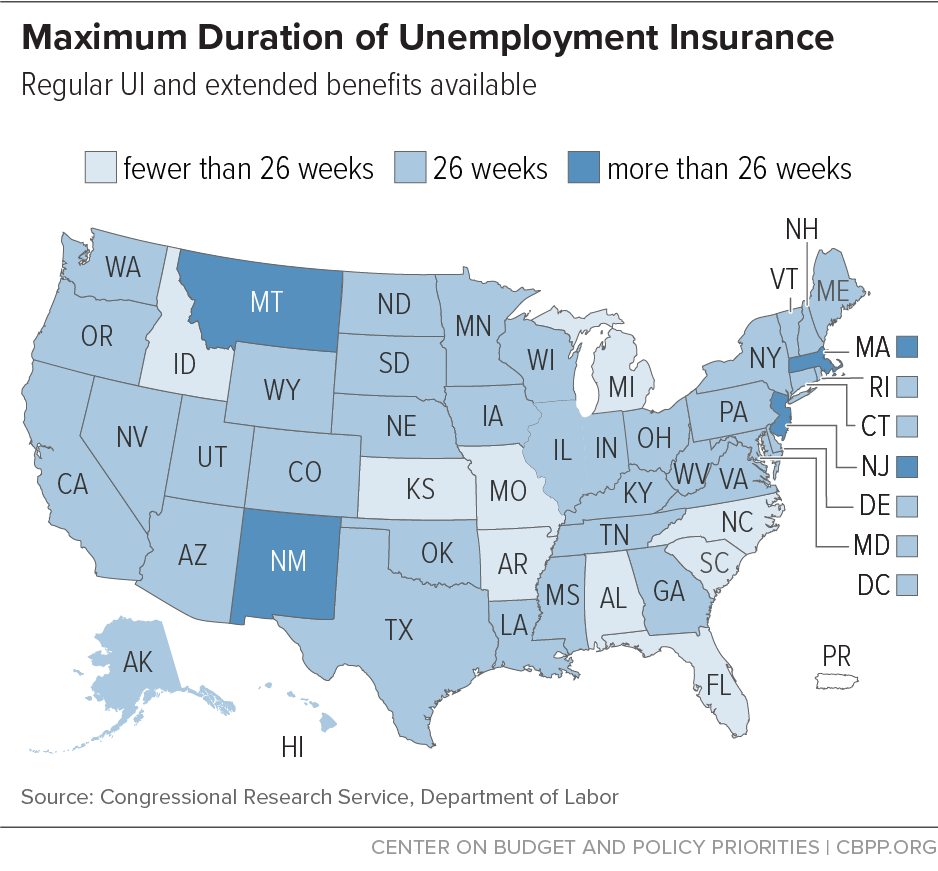 The remaining six states periodically update their maximum weeks of UI available based on changes in the state’s unemployment rate:

State laws in many states with a maximum of 26 weeks employ a sliding scale based on a worker’s earnings history to determine the maximum number of weeks for which an individual worker qualifies. Except in Connecticut, the District of Columbia, Georgia, Hawai’i, Illinois, Kentucky, Louisiana, Maryland, New Hampshire, New York, West Virginia, and Puerto Rico, many UI recipients’ maximum is fewer than 26 weeks.

A Guide to Statistics on Historical Trends in Income Inequality

January 10, 2022
Stay up to date
Receive the latest news and reports from the Center