The federal-state unemployment insurance (UI) system helps people who have lost their jobs and are eligible for benefits by temporarily replacing part of their wages.

Created in 1935, unemployment insurance is a form of social insurance, with contributions paid into the system on behalf of working people so that they have income support if they lose their jobs. The system also helps sustain consumer demand during economic downturns by providing a continuing stream of dollars for families to spend.

The states run the basic unemployment insurance (UI) program, although the U.S. Department of Labor oversees the system. The basic program in most states provides up to 26 weeks of benefits to unemployed workers, replacing about half of their previous wages, up to a maximum benefit amount. States provide most of the funding and pay for the actual benefits provided to workers; the federal government pays only the administrative costs. At the start of the recession in February 2020, average weekly benefits were about $387 nationwide but ranged from a low of $215 in Mississippi to $550 in Massachusetts, and they were only $161 in Puerto Rico.

Although states are subject to a few federal requirements, they are generally able to set their own eligibility criteria and benefit levels. In recent years, for example, a handful of states have reduced their maximum number of weeks of regular UI benefits below 26 weeks. For more information about the UI benefits available in each state, see Policy Basics: How Many Weeks of Unemployment Compensation Are Available?

The permanent Extended Benefits (EB) program provides an additional 13 or 20 weeks of compensation to jobless workers who have exhausted their regular UI benefits in states where the unemployment situation has worsened dramatically (regardless of whether the national economy is in recession). The total number of weeks available depends on a state’s unemployment rate and its unemployment insurance laws. Normally, the federal government and the states split the cost of EB. The March 2020 Coronavirus Aid, Relief, and Economic Security (CARES) Act provided full federal funding for EB through the end of 2020, and the December 2020 coronavirus relief legislation extended full federal funding through March of 2021. As a result of the sharp increase in unemployment in March and April 2020, by late June EB was “on” in every state but South Dakota, plus the District of Columbia, Puerto Rico, and the Virgin Islands, but by December EB was “off” in more than half the states.

Design flaws have prevented the EB program from responding rapidly and effectively in past recessions, which has led federal lawmakers to enact temporary programs on an ad hoc basis since the late 1970s to provide additional weeks of UI benefits. Measures enacted in the Great Recession of 2007-09 included not only extra weeks of benefits from mid-2008 through 2013, but also full federal funding of EB and a $25 increase in weekly UI benefits. For some of this time, workers in hard-hit states were eligible for up to 99 weeks of UI benefits.

The CARES Act took bold actions to combat the human hardship and economic damage flowing from the COVID-19 pandemic, but none of its UI provisions lasted beyond the last full week in December. The COVID relief enacted in December extended temporary federal support for unemployed workers through March 2021. The legislation enacted in 2020 had three major components: additional weeks of federally funded benefits, a federal supplement to weekly benefit payments, and an expansion of eligibility to receive unemployment assistance for people not eligible for regular state UI.

Pandemic Emergency Unemployment Compensation (PEUC) is the current version of the extra weeks of emergency federal benefits policymakers have enacted in past recessions. It originally provided 13 weeks of federally funded UI to workers who exhaust their regular state benefits. These were to be paid ahead of any EB but no PEUC benefits could be paid after the last full week in December. The December relief legislation extended the maximum number of weeks of PEUC a person could receive from 13 to 24, but no one can start PEUC receipt after March 14, 2021 and no one can continue to receive PEUC after April 5, 2021.

The CARES Act created a new federally funded program, Pandemic Unemployment Assistance (PUA), for some unemployed workers who exhaust their regular and extended benefits, but primarily for many others who are not normally eligible for state UI. The latter include the self-employed, those seeking part-time work, those who do not have a long enough work history, and those who must leave work for compelling family reasons. No PUA was payable after the last full week in December. The December 2020 coronavirus relief increased the maximum number of weeks of PUA a person could receive from 39 to 50 and extended the program’s duration to March 14, 2021 with a phaseout period until April 5, 2021 like that for PEUC for people who still have weeks of eligibility left on March 14.

The CARES Act provided a Pandemic Unemployment Compensation (PUC) payment of $600 a week to supplement the weekly benefit determined under state UI laws for all programs (regular UI, PEUC, EB, and PUA) through July 31, 2020. A $300 weekly supplement was subsequently added for a handful of weeks after July 31, and the December coronavirus relief legislation provided a $300 supplement from December 26, 2020 to March 14, 2021.

In some circumstances a person could receive more than 50 weeks of benefits. Unlike PEUC and PUA, EB does not expire. For example, someone who has exhausted 26 weeks of regular UI and 24 weeks of PEUC before PEUC expires could be eligible for an additional 13 or 20 weeks of EB in a state where it is “on.”

Unemployment insurance helps eligible workers weather a bout of joblessness, and UI benefits score high in “bang-for-the-buck” calculations of their economic impact as stimulus in fighting recessions, but UI has not adapted to changes in the labor market since it was established. When UI was designed, the typical job loser was a married male breadwinner laid off from a full-time job to which he could expect to return when business picked up. In the 21st century labor market, the program’s outdated eligibility requirements in many states exclude people such as unemployed workers looking for part-time work and those who leave work for compelling family reasons, like caring for an ill family member. This prevents large numbers of unemployed workers, many of whom are women and people of color, from receiving UI benefits.

The 2020 relief measures expand eligibility through the PUA, but only temporarily. Permanent, comprehensive UI reform would expand eligibility, raise benefit levels, and automatically provide extra weeks of benefits in a recession, which would strengthen the program’s automatic stimulus response in a weakening economy. 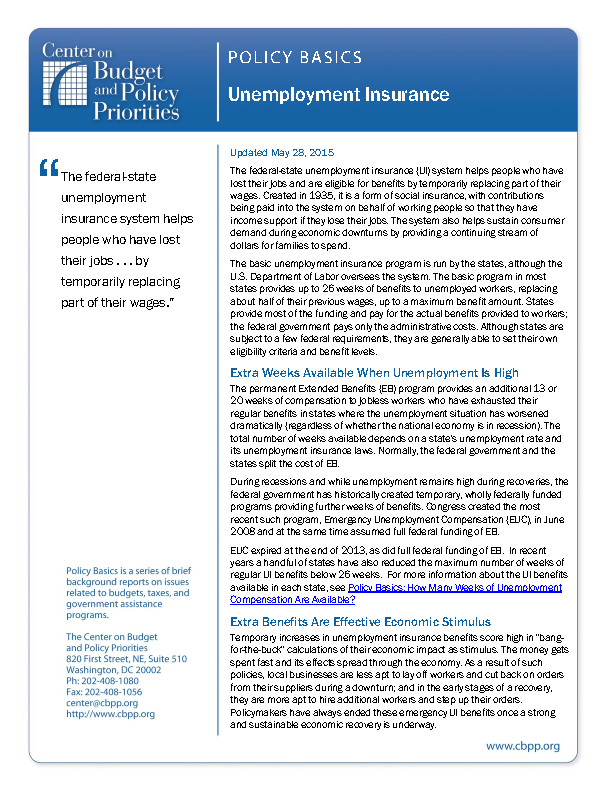