House Appropriations Committee Republicans yesterday approved a funding bill for the Department of Housing and Urban Development on a party-line vote, defeating amendments by Reps. Marcy Kaptur, David Price, and others to raise funding for vouchers and other housing assistance.  The bill makes clear the harsh consequences of Congress’ recent decision to retain the sequestration cuts for domestic programs and impose further cuts that disproportionately hit low- and moderate-income people.

The House bill wouldn’t even renew all vouchers that families are using this year, according to Office of Management and Budget Director Shaun Donovan — let alone restore any vouchers lost to sequestration.  Nor would it fund any new housing for chronically homeless people or vouchers for veterans or others who are homeless.  The bill would thus halt recent progress towards eliminating these unacceptable hardships.

As I’ve explained, fixing sequestration is key to restoring vouchers that communities have lost since 2013, as well as to reducing homelessness.  Some 85,000 fewer families were using vouchers in December 2014 than two years earlier due to sequestration, we estimate (see graph).  (Our updated state and local voucher cut estimates are here.) 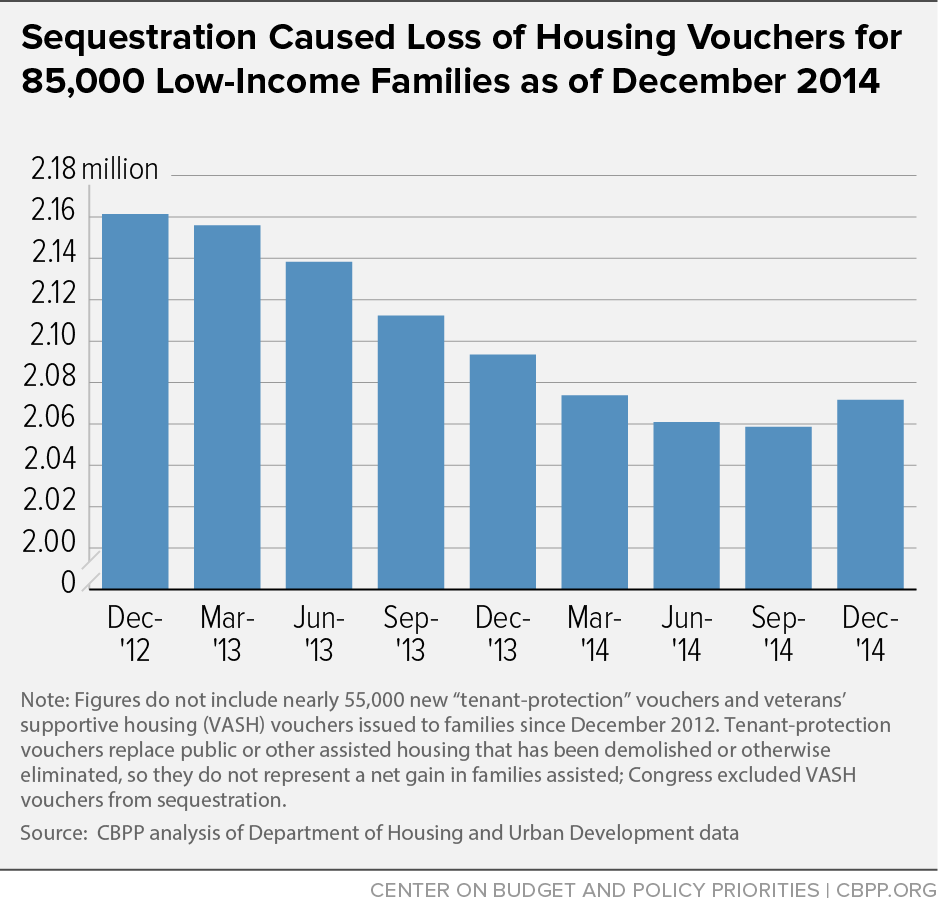 The President’s 2016 budget addresses these issues by eliminating sequestration and replacing it with alternative savings.  That creates room for his budget to provide $512 million to fully reverse the sequestration cuts in vouchers.  It targets 30,000 of the restored vouchers to reducing homelessness among families, veterans, and people fleeing domestic violence, as well as to help families with children at risk of being separated due to a lack of adequate housing.

The President’s budget also includes $295 million to create more than 25,000 new units of housing for chronically homeless individuals and families.

In recent years, targeted rental assistance has substantially reduced veterans’ and chronic homelessness.  The President’s proposals would bring us close to eliminating these hardships.  They’d also reduce homelessness and unnecessary separations among families with children.

Congress’ budget plan notwithstanding, there appears to be growing bipartisan interest in providing relief from sequestration, as Congress did in 2014 and 2015 under the Murray-Ryan agreement.  Congress should pursue such an agreement — and it should devote some of the resulting funding room to restoring lost vouchers and providing more housing for the chronically homeless.