The House Appropriations Committee’s 2019 funding bill for the IRS doesn’t begin to address the decline in enforcement funding in recent years. That’s particularly ill-advised as the IRS soon begins enforcing the 2017 tax law, which creates many new opportunities for tax avoidance and will affect every individual and business taxpayer in America.

Although the bill modestly increases funding for the IRS accounts that fund information technology, it leaves enforcement funding at the 2018 level — and down roughly $1.6 billion (25 percent) since 2010 in inflation-adjusted terms.  (See chart.) 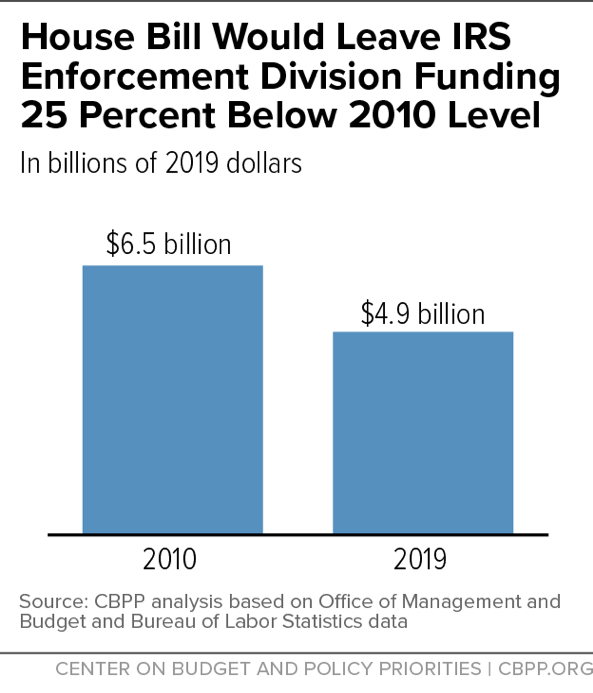 Also, the bill doesn’t include President Trump’s proposal for added enforcement funding — $362 million in 2019 and more in later years — that wouldn’t count against the 2011 Budget Control Act’s annual cap on overall funding for non-defense appropriations. This proposed “cap adjustment” recognizes that tax enforcement raises significantly more money than it costs, so it makes sense to exempt some enforcement dollars from the funding caps. This approach has a long bipartisan history, dating back to 1990s legislation enacted under President George H.W. Bush.

Congress has cut total IRS funding by 18 percent since 2010 in inflation-adjusted terms, and the overall IRS workforce has shrunk by about a fifth.  The enforcement division has been particularly hard hit, absorbing nearly 14,000 of the agency’s roughly 18,000 staff losses. Those cuts have led to a sharp decline in audits.

Now, the IRS faces a once-in-a-generation challenge from the 2017 tax law. Given some of the law’s features and the hasty way it was drafted, it will likely fuel aggressive efforts by some businesses and wealthy individuals to push the law’s outer limits, and possibly beyond, to minimize their taxes. As the IRS funding bill advances, Congress needs to increase enforcement funding and adopt the President’s cap adjustment proposal.

April 23, 2018
PreviousProposed Medicaid Eligibility Restrictions Have Costly Unintended Consequences
NextCanadian-Style Child Benefit Would Cut U.S. Child Poverty by More Than Half
Stay up to date
Receive the latest news and reports from the Center