Canadian-Style Child Benefit Would Cut U.S. Child Poverty by More Than Half

Lawmakers need not look far to find ways to help struggling families with children raise their living standards.  Canada recently adopted the Canada Child Benefit (CCB), a dramatic initiative that provides families up to the equivalent of about $4,300 U.S. dollars per year for each child age 6 to 17 and $5,100 per child under 6.  If adopted in the United States to replace the program it most resembles, the Child Tax Credit (CTC), it would raise median incomes, lower inequality, and cut the number of U.S. children living below the poverty line by more than half.

Created in 2016, the CCB resembles the CTC but is much larger.  The CTC provides most tax filers with children with up to $2,000 a year for each eligible child under age 17.  (The 2017 tax law doubled this maximum from $1,000 per child.)  The CTC is an important anti-poverty program, lifting more than 1.5 million children above the poverty line even before its recent expansion.  The maximum CCB, however, is more than twice the size of the expanded CTC.

Equally important, the CCB doesn’t exclude families for not earning enough.  The CCB gives a child the maximum benefit whether his or her family earns $0 or $20,000 a year.  This contrasts with the CTC, which perversely denies the maximum of $2,000 per child to 27 million children under 17 — about 1 in 3 — because their families’ incomes are too low.  It provides nothing to families making less than $2,500 a year, and it doesn’t provide the full $2,000 per child for a two-child family until its earnings reach about $30,000 a year.  This approach shortchanges the families who need help the most.

Another difference is that families receive the CCB monthly, while they receive the CTC once a year when they file their tax returns. 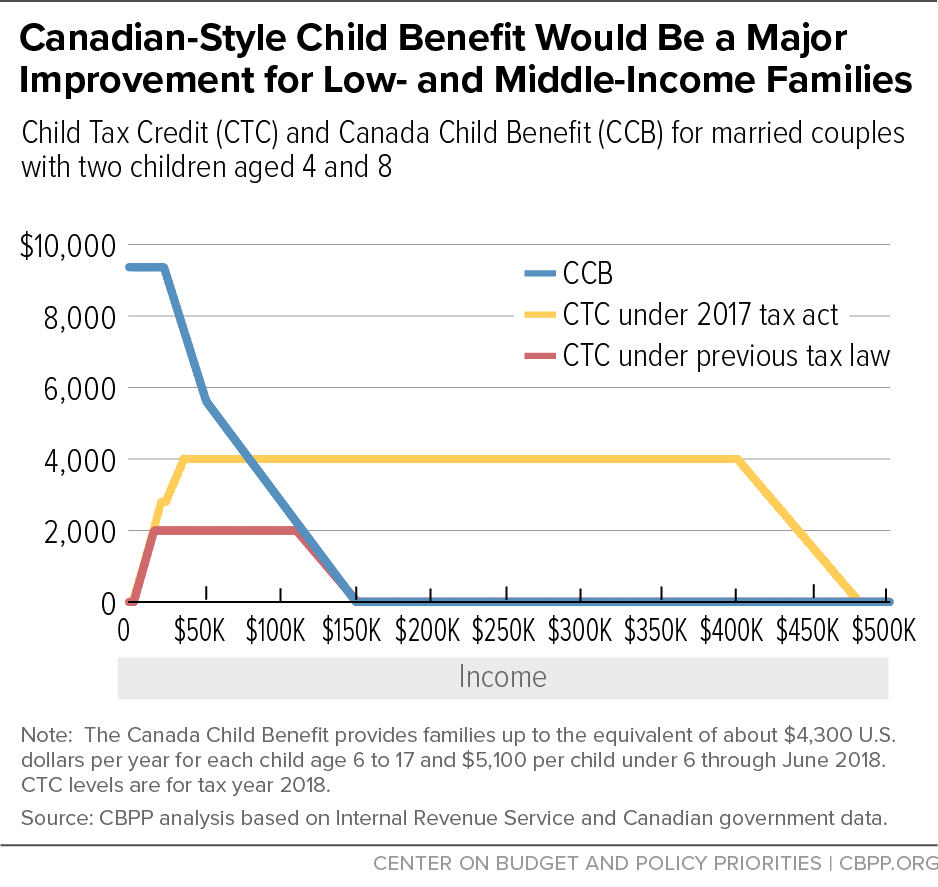 Transforming the CTC into a child benefit resembling the CCB would reduce the number of children under age 18 living in poverty by more than half, we estimate, and reduce the number of children living in deep poverty (below half the poverty line) by nearly two-thirds.  It would also raise median household incomes significantly and lower inequality.

Depending on some aspects of the proposal’s design, it would cost about $50 billion to $80 billion a year more than the CTC it would replace.  Policymakers could seek to pay for that through other tax reforms, such as rolling back tax breaks for estates worth over $11 million and for business owners with “pass-through” income, and other poorly designed tax breaks enacted in the 2017 tax law.

We’ve derived these figures from our analysis of 2015 Census Bureau data from the Current Population Survey and the Supplemental Poverty Measure, with corrections for underreported government assistance from the Department of Health and Human Services/Urban Institute Transfer Income Model 3 (TRIM3).  All figures here are in 2018 dollars.

The CCB is one of a number of possible approaches to reducing child poverty and targeting resources to children in low-income families.  For example, a number of bills introduced in Congress last year, including by Senators Sherrod Brown and Michael Bennet and Rep. Rosa DeLauro, would substantially reduce child poverty by expanding the CTC, while other proposals would lower child poverty in other ways.