When Congress considers the IRS’s 2019 funding level in the coming weeks, it should embrace President Trump’s proposal to add funding for enforcing tax laws that doesn’t count against the 2011 Budget Control Act’s (BCA) annual cap on overall funding for non-defense appropriations. That approach to IRS enforcement funding has a long bipartisan history and is especially timely now, given the IRS enforcement division’s depleted funds and personnel and its coming workload increase under the new tax law. The 2018 funding bill didn’t include any added enforcement funding.

The President’s 2019 budget includes a “cap adjustment” of $362 million in 2019, and more in later years, for expanded IRS tax enforcement. The proposal recognizes that because tax enforcement raises significantly more money than it costs, it makes sense to exempt some enforcement funding from the caps, which ultimately require offsetting funding increases in one area with cuts in other areas. As the President’s budget explains:

The new and continuing investments in expanding and improving the effectiveness and efficiency of the IRS’s tax enforcement program . . . are estimated to generate $44 billion in additional revenue over 10 years and cost approximately $15 billion resulting in an estimated net savings of $29 billion. Once the new enforcement staff are trained and become fully operational these initiatives are expected to generate roughly $4 in additional revenue for every $1 in IRS expenses.

While a new proposal for this President, this approach dates back to the 1990 Budget Enforcement Act, enacted under President George H.W. Bush, which included a cap adjustment for IRS compliance activities. President Obama proposed larger IRS cap adjustments in several budgets, though Congress didn’t approve them.

The Trump proposal is urgently needed. Congress has cut IRS funding by 18 percent since 2010, after adjusting for inflation, and the overall IRS workforce has shrunk by about a fifth. The enforcement division has been particularly hard hit, absorbing nearly 14,000 of the roughly 18,000 staff losses. The cuts have driven a sharp decline in audits, especially for high-income individuals and large corporations. 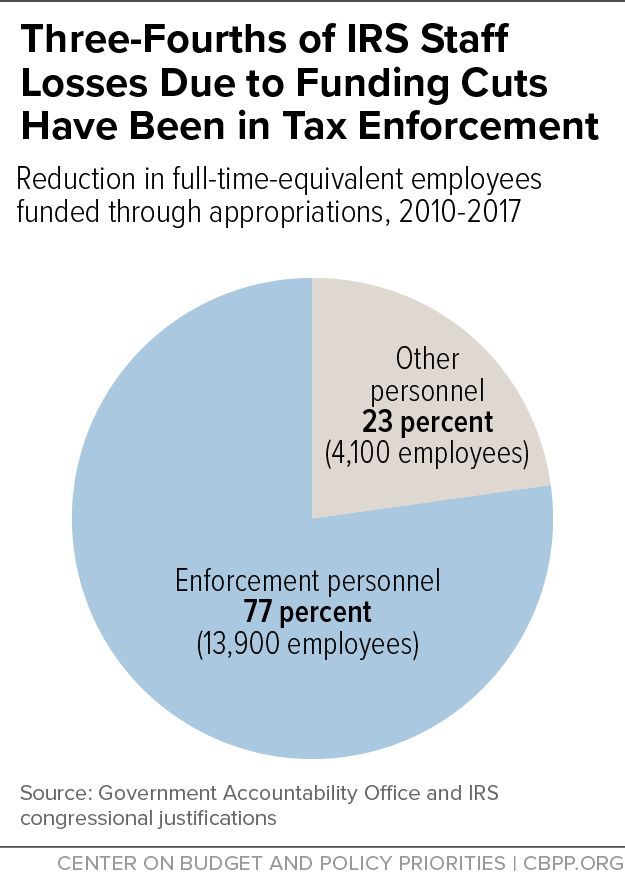 Also, the depleted enforcement division — and the rest of the IRS — faces a once-in-a-generation challenge from the sweeping tax overhaul. That challenge will start soon and last for years because rather than simplify the tax code, the new tax law created new loopholes. In particular, the new deduction for “pass-through” business income and low corporate tax rate will encourage widespread tax gaming , as we’ve written.

The IRS needs enough well-trained personnel to maintain the tax system’s integrity. Congress should give the agency the funds to do its job.

January 25, 2018
PreviousIn Case You Missed It…
NextJCT Highlights Pass-Through Deduction’s Tilt Toward the Top
Stay up to date
Receive the latest news and reports from the Center