Some 12.3 percent of households (15.6 million) were food insecure at some point during 2016, meaning household members struggled to afford enough food for an active, healthy life year-round, the latest annual Agriculture Department report shows. While this figure is below its height of 14.9 percent in 2011, it’s virtually unchanged from its 2015 level of 12.7 percent — and remains above levels before the Great Recession of 2007-09. 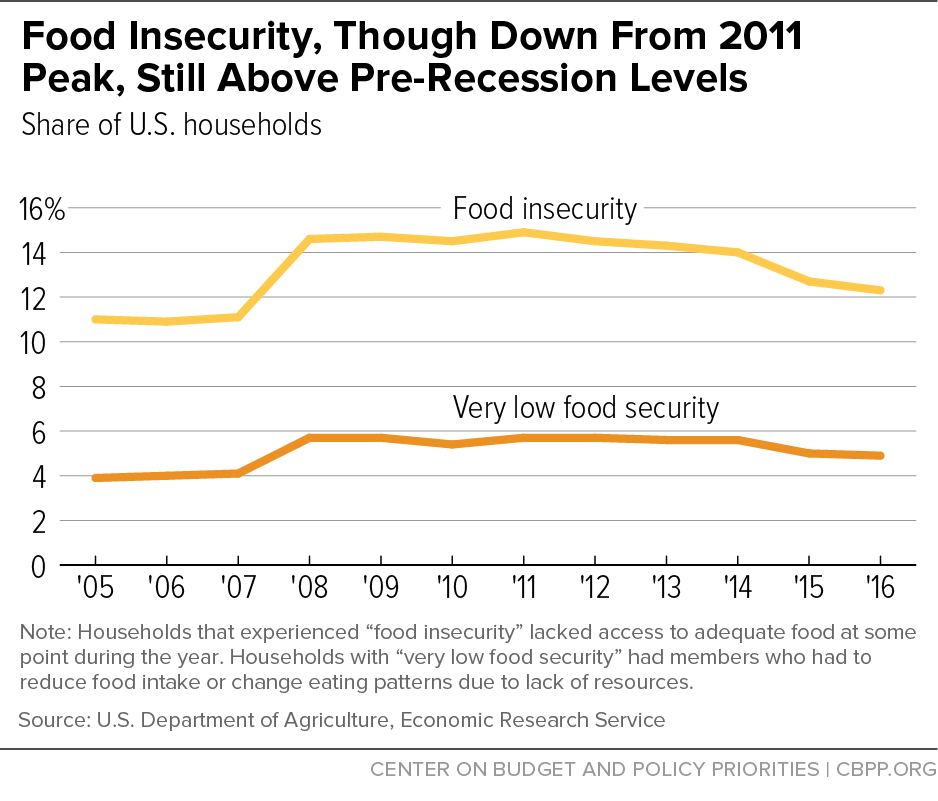 Similarly, the share of households with very low food security, a more severe form of food insecurity in which some members of households have to take steps such as skipping meals because they lack resources, remained unchanged from 2015 at 4.9 percent. This share also grew during the recession and has since declined, yet remains above pre-recession levels.

In households with children, adults often protect children from food insecurity, making sure they get enough to eat when food resources are low. Nevertheless, in about 8 percent of households with children, both children and adults experienced food insecurity in 2016, also unchanged from the 2015 level, though unlike for all households, this rate has fallen to pre-recession levels. The share of households in which both children and adults experienced very low food security also has fallen to pre-recession levels.

Food insecurity rates fell in 16 states between the three-year periods of 2011-2013 and 2014-2016, and rose in one, New Mexico. (The Agriculture Department examines three-year periods for states to ensure the reliability of data.) In most states, however, rates remained above the pre-recession levels of ten years earlier.

These data show that while Americans can better afford food than during the recession, many still face hardship. Next week, the Census Bureau will release poverty and income data that will shed more light on how many Americans are struggling to make ends meet. As policymakers consider cuts to critical safety net programs such as SNAP (formerly food stamps) that help low-income and often food-insecure Americans put food on the table, they should bear in mind the impact of such cuts on the millions of households struggling with food insecurity.

November 7, 2019
PreviousFederal Spending and Revenue Needs Will Grow
NextIn Case You Missed It . . .
Stay up to date
Receive the latest news and reports from the Center