Florida has cut K-12 education funding significantly since 2008, making it harder for the state's communities to thrive and for its economy to offer broadly shared opportunity. A ballot measure this fall requiring a supermajority vote in the legislature to raise revenues risks making those deep cuts permanent.

Like most states, Florida now requires a simple majority of both houses of the legislature plus the governor's signature to raise revenues. The proposal would amend Florida's constitution to require two-thirds of both houses to approve any new revenue, tax, or fee; increase any existing revenue source; or reduce or eliminate any tax break.

Nationally, combined state and local funding for schools per pupil has largely recovered from the last recession, but in Florida it hasn't come close. Florida provided 23 percent less state and local funding per student in 2016 than before the recession, after adjusting for inflation — the second deepest cut of any state. (See graph.) That amounts to $2,767 less per student for teacher salaries, bus transportation, school utility bills, and supplies, among other school needs. 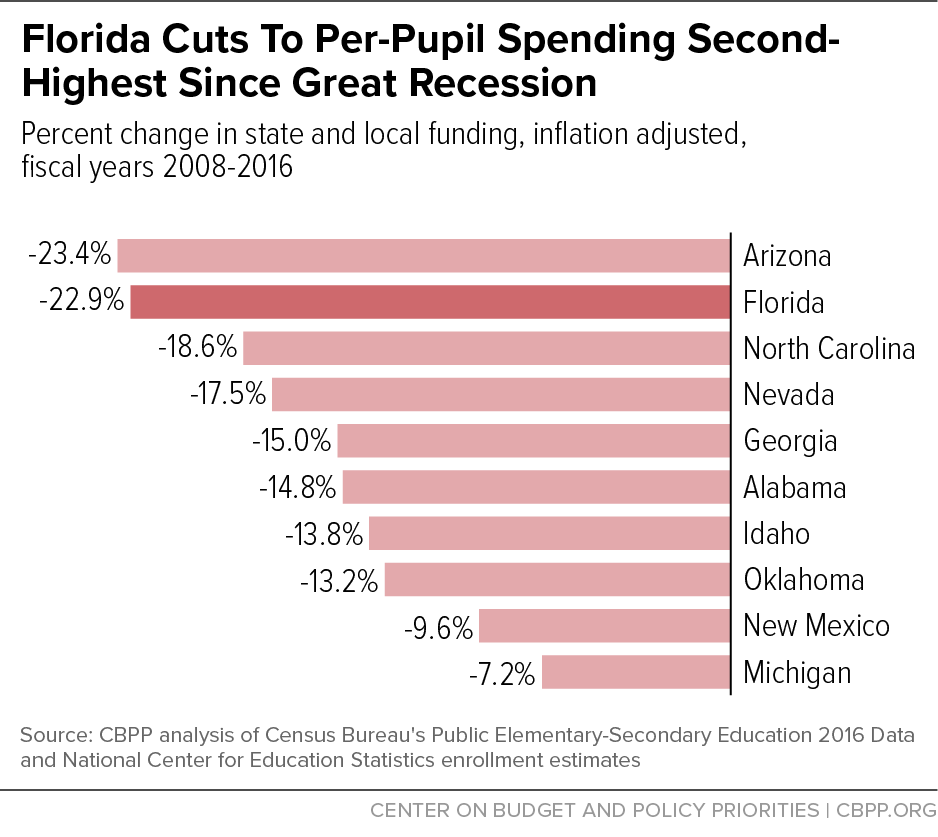 State and local funding in Florida for capital expenses — like school construction, renovation, and technology upgrades — has fallen even deeper: a 71 percent decline since 2008, after adjusting for inflation. This, too, is the second-deepest cut in the nation.

The proposed supermajority requirement would make it harder to raise the resources needed to adequately invest in Florida's schools and children. And since education is the second-largest part of Florida's budget, lawmakers would have a hard time avoiding further education cuts if they couldn't overcome the requirement to raise revenues during a recession or other crisis, such as after a major hurricane.

Although Florida raised school funding somewhat for the coming school year, it designated nearly all of the new funds for school safety and mental health initiatives, leaving very little for teacher salaries, repair backlogs, and other pressing needs. Florida superintendents have called for a special legislative session on education funding, but it's unlikely to take place. As a result, some districts are bracing for a fresh round of program cuts and layoffs.

Florida's schools are already underfunded. A supermajority requirement would only make things worse.

March 26, 2018
PreviousHouse Bill Partially Repealing “IMD Exclusion” Would Do More Harm Than Good
NextTPC: 2017 Tax Law Could Leave Most Low- and Middle-Income Families Worse Off
Stay up to date
Receive the latest news and reports from the Center