Forget the conventional wisdom.  Americans overwhelmingly take pride in paying their taxes, a 2014 survey by the IRS Oversight Board shows. 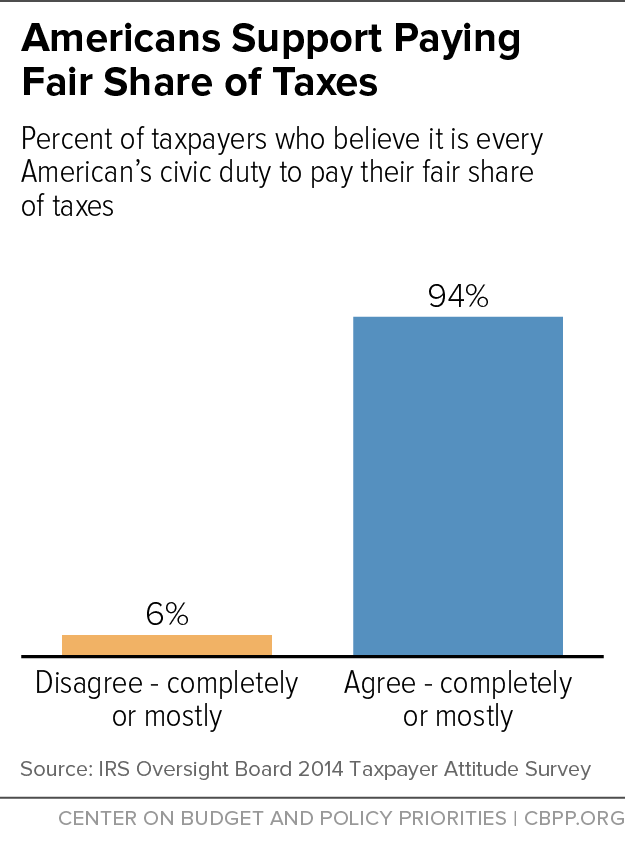 Our country’s tax system is based on voluntary compliance.  Its proper functioning, therefore, depends on lots of civic duty and responsibility, and that’s exactly what exists.  Some 94 percent of Americans believe it’s their civic duty to pay their fair share of taxes.

In The Atlantic last April, Vanessa Williamson highlighted some interview anecdotes that hint at the reasons behind these strong survey results:

Beyond the pride of fulfilling a fundamental civic obligation, Americans can take pride in where their tax dollars are going (see here for state tax dollars and here for federal).  As one woman from Florida told Williamson, “maybe my little bit of money that I’m putting in is paying somebody else’s Social Security or Medicare.”

Where Do Our Federal Tax Dollars Go?

Video: Policy Basics: Where Do Our Federal Tax Dollars Go?

Where Do Federal Tax Revenues Come From?

August 6, 2020
PreviousStates Can Use Existing Information to Reduce Number of Uninsured
NextRental Assistance Should Be More Efficient, Not Less Accountable
Stay up to date
Receive the latest news and reports from the Center