Children’s Uninsured Rate Rises for First Time in a Decade

The uninsured rate among children rose in 2017 from 4.7 percent to 5 percent, a new report from Georgetown University’s Center for Children and Families finds — the first increase since Georgetown began producing this annual report a decade ago (see chart). 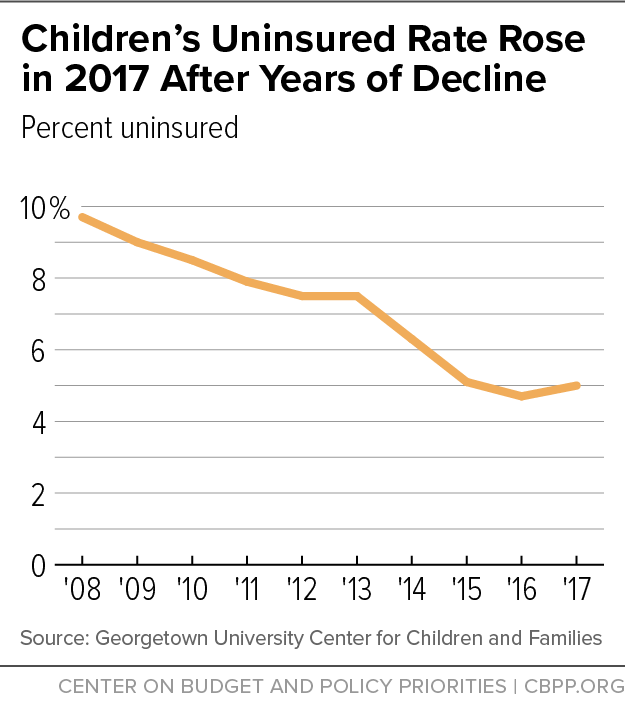 The children’s uninsured rate dropped steadily between 2008 and 2016, from 9.7 percent to 4.7 percent, largely due to state and federal policies that expanded children’s eligibility for Medicaid and the Children’s Health Insurance Program (CHIP) and streamlined enrollment. In addition, the Affordable Care Act (ACA) provided financial assistance that helps many moderate-income families afford private coverage and greatly expanded Medicaid coverage among low-income adults. Expanding parents’ Medicaid coverage also increases kids’ coverage because parents are likelier to sign up their eligible children when the whole family can get coverage, research shows.

But in 2017, the children’s uninsured rate rose to 5 percent, despite an improving economy. While it rose at all income levels, the rise was greatest among poor children, from 6 percent in 2016 to 6.6 percent in 2017.

The reasons for the increase are unclear, but it coincides with efforts by the Trump Administration and congressional Republicans to repeal the ACA — which created public confusion over the law’s status and may have dampened enrollment — as well as Administration actions making it harder for eligible people to enroll, such as cancelling most federal outreach efforts toward the pivotal end of the marketplace open enrollment period. Given the outcome of this year’s congressional elections, however, ACA repeal and major cuts to Medicaid and CHIP are reliably safe from enactment for the next two years.

Two other hopeful developments could mitigate further erosion of children’s coverage. First, earlier this year policymakers enacted two CHIP bills that, together, provided federal funding for ten years, extended a “maintenance of effort” requirement that prevents states from rolling back eligibility for low-income children, and extended options for states to streamline children’s enrollment and renewals.

Second, up to seven new states could implement the ACA’s Medicaid expansion in 2019. Virginia’s expansion begins January 1, while Maine’s will likely begin in early 2019. Voters in Idaho, Nebraska, and Utah approved ballot initiatives this month to adopt the Medicaid expansion. And newly elected governors in Kansas and Wisconsin made Medicaid expansion a core message of their campaigns. As noted, extending coverage to low-income adults boosts coverage among children.

With About 2 Weeks Left, Consumers Should Enroll in Marketplace Plans

November 29, 2018
PreviousNew Funds Will Help Housing Agencies Expand Opportunity for Families With Vouchers
NextIn Case You Missed It...
Stay up to date
Receive the latest news and reports from the Center