Despite the alarming rise in the number of people, including children, who are struggling to get enough to eat, the Senate Republican proposal for the next economic relief package doesn’t include a key measure to address this hardship: raising SNAP (food stamp) benefits. Food insecurity can have long-term consequences for children’s health and well-being, studies show; raising SNAP benefits reduces hardship and increases families’ food spending during an economic downturn. Policymakers should boost SNAP benefits in the next relief package, as the House-passed Heroes Act does.

As we’ve explained, millions of households are struggling to meet basic needs in this economic crisis due to the widespread loss of jobs and income. Rising food prices are compounding the problem. Eleven to 20 percent of adults in households with children reported for the week ending July 21 that their children sometimes or often didn’t get enough to eat because of financial problems, figures that have stayed at similarly high levels over the past several weeks. That translates into roughly 9 to 17 million children living in households where the children couldn’t get enough food.

These figures are especially startling because, historically, adults have sought to shield children from hunger when a family falls on hard times. They’re also a sharp increase from pre-pandemic levels: in 2018, at most about 3 percent of adults reported that their children sometimes or often hadn’t eaten enough at some point in the last 30 days. Other research suggests that food insecurity among households with children may have doubled overall — and tripled among households with children — in the pandemic’s early months.

Rising food need among children should spur policymakers to respond immediately. So should the serious long-term consequences for children who miss out on basic nutrition. Studies link food insecurity among children with: reduced intake of some key nutrients; health problems such as iron deficiency, which is linked with long-term neurological damage; and behavioral issues and mental health conditions. These problems, in turn, can lower children’s test scores, their likelihood of graduating from high school, and their earnings in adulthood. While the risk is greatest for children who chronically lack sufficient food, the shock of becoming food insecure may itself affect children’s behavior, and living in a household that’s even temporarily food insecure is linked with negative development among toddlers, some research suggests.

Raising SNAP benefits during a downturn helps families buy more food, cushioning the impact on food insecurity, history shows. After policymakers temporarily raised benefits during the Great Recession of about a decade ago, very low food security among SNAP participants — a severe form of food insecurity, in which some household members take steps such as skipping meals because they lack resources — actually fell (see graphic). Moreover, households were less likely to run out of benefits at the end of the month and eat less as a result, while their spending rose for food as well as other needs such as housing (since the increased benefits freed up more income for other necessities). The benefit increase may also have helped improve children’s health. Conversely, when the increase ended, participants’ food insecurity rose and their food spending fell by more than other low-income households. 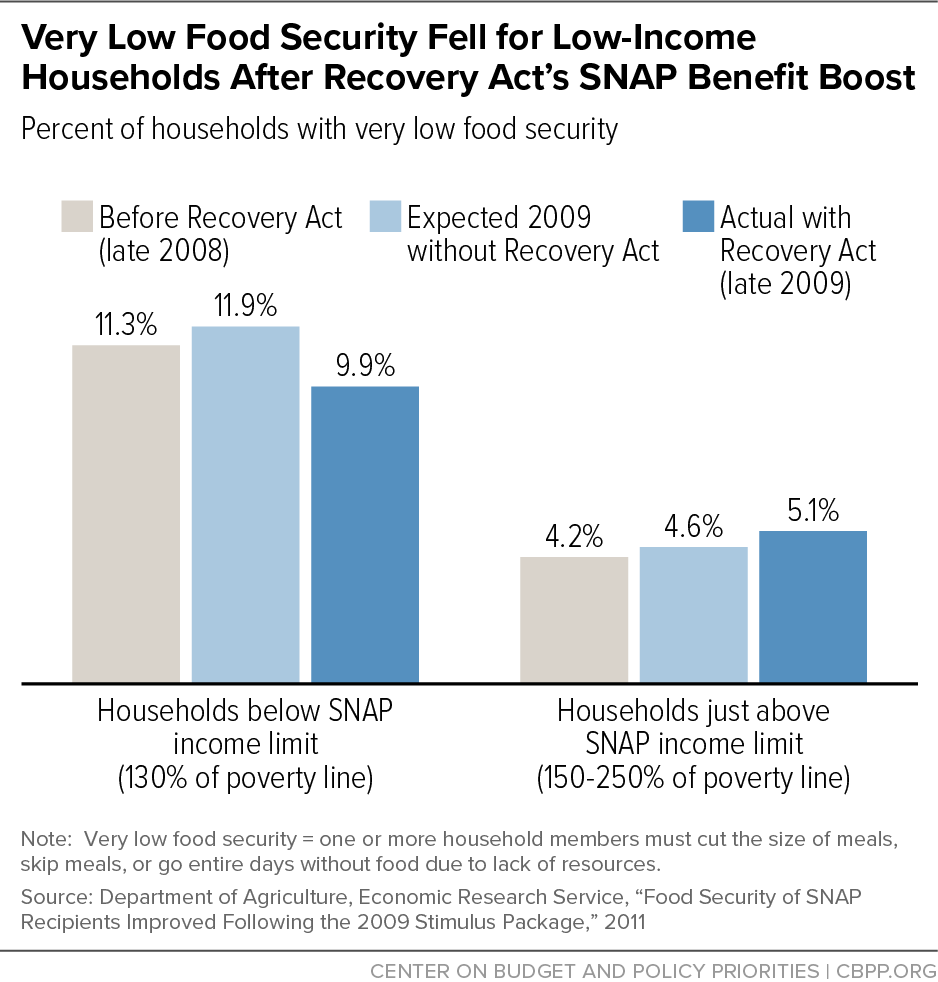 With both food insecurity and food prices rising during the current crisis, raising SNAP benefits would make a big difference to millions of families. While the emergency benefit supplements provided through the Families First Coronavirus Response Act of March have likely reduced hardship for many, they left out the poorest 40 percent of SNAP households, including at least 5 million children. A Heroes Act provision raising the maximum SNAP benefit by 15 percent would help all SNAP households, including the poorest ones, better afford food. Given the potential short- and longer-term impacts on children, policymakers shouldn’t wait another day to act.