Arizona teachers ended their strike after Governor Doug Ducey signed a budget giving them a 20 percent salary increase over three years. But the budget doesn’t include the new revenue required to finance the planned spending, relying instead on optimistic predictions of economic growth, continued cuts in the Medicaid rolls, and one-time funding shifts. Meanwhile, the new revenue sources the budget does include – like a new car-registration fee – would disproportionately burden low- and middle-income families.

There’s a better way, one that puts Arizona on a path toward sustainable funding for teachers and K-12 public schools. The Invest in Education Act, a ballot measure from a coalition of faith leaders and education advocates, would raise income tax rates for Arizona’s wealthiest families to pay for teacher pay raises and other needed education investments. It will go on the November ballot if it attracts the required 150,000 signatures by July 5.

The revenue would go entirely to K-12 education:  60 percent for teacher salary increases and employment-related expenses and 40 percent for public school maintenance and operations, including things like reducing class sizes and supporting full-day kindergarten. (Arizona cut state funding for full-day kindergarten a few years ago, forcing some districts to offer only half-day programs or require parents to pay a fee for a full-day program.)

The measure would reverse nearly three decades of state income tax-cutting that has made it very hard for state policymakers to adequately fund public schools. Arizona’s “formula” funding for schools — the major form of state funding — is down 13.6 percent per student since the recession hit in the 2007-2008 school year, after adjusting for inflation, which is among the deepest cuts in the country.  (See chart.) 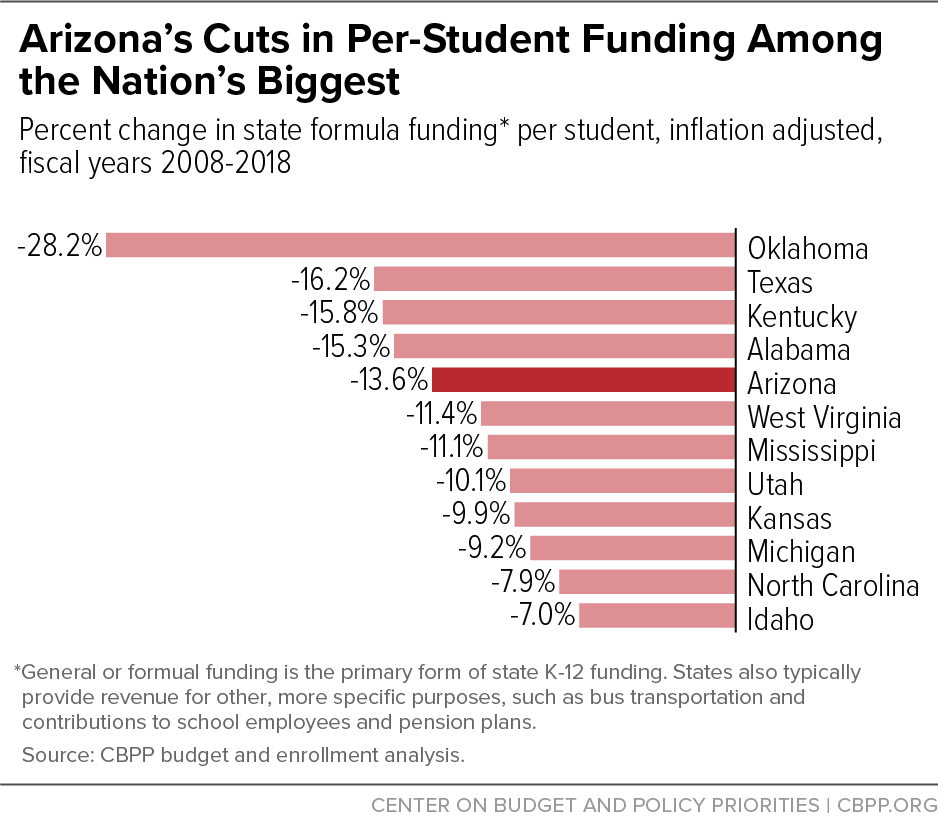 The measure would also make Arizona’s tax code somewhat less regressive. Currently, the poorest 20 percent of households pay 12.5 percent of their annual income to state and local taxes — more than twice as much as the wealthiest 1 percent of Arizonans, who pay just 5.7 percent, according to the Institute on Taxation and Economic Policy. The Invest in Education Act would modestly reduce this disparity by raising that 5.7 percent figure to 6.5 percent.

States from California to New Jersey have raised tax rates on high-income households and prospered. Massachusetts voters likely will face a ballot measure to do the same this fall.

May 10, 2018
PreviousComplex Medicaid Changes Likely to Cost Many People Coverage
NextGeographic Concentration of Poor Health Explains Most of “Disability Belt”
Stay up to date
Receive the latest news and reports from the Center