The Administration’s budget calls for $214 billion in reductions over five years in non-entitlement domestic programs outside homeland security, compared to current funding levels adjusted only for inflation. These “domestic discretionary” programs — that is, annually appropriated programs not related to the Department of Defense, international affairs or homeland security — encompass a broad array of public services such as education, environmental protection, transportation, veterans’ health care, medical research, law enforcement, and food and drug safety inspection.

One unusual aspect of this budget is the omission of information about how these cuts would affect particular programs. The budget fails to provide proposed funding levels for individual appropriated programs for years after 2006 — the first time since 1989 that an Administration’s budget has lacked this type of information. As a consequence, the published, widely available budget documents released by the Administration on February 7 provide programmatic details on how the Administration would achieve only the first $18 billion of these cuts, the reductions that would occur in 2006. Some $196 billion in domestic cuts — all of the reductions in years 2007 through 2010 — are left unidentified.

This analysis sheds light on where the Administration would make these cuts. It examines unpublished backup budget documents provided by the Office of Management and Budget to the Budget Committees of Congress. These documents break out the cuts by groups of government programs. The documents show the overall level of budget cuts that would be made in domestic discretionary programs each year by program area (or by “budget function,” as the program areas are called)[1].

In 2010, when the overall cuts in domestic appropriations would reach $66 billion — or 16 percent (as compared to current funding levels adjusted for inflation) — most major program areas would be hit sharply. The following figures describe the depth of these cuts for the major discretionary program areas. (These data do not indicate how specific programs within these program areas would fare; such information has not been made available.)

While the backup materials show that the cuts would be both large and widespread, these materials do not answer the basic question of which programs would be cut and by how much to achieve the overall level of savings in these program areas that the budget calls for. What makes this omission particularly troubling is that the Administration is also proposing to set statutory limits on overall discretionary spending — called “discretionary caps” — for each of the next five years. The annual caps would be set at levels equal to the total amount that the President’s budget requests for discretionary programs in each of these next five years. If these caps are established and Defense Department, homeland security and international affairs programs are funded at the levels the budget proposes, then domestic programs funded through the appropriations process will have to be cut by $214 billion over these years, and by $66 billion in 2010 alone. 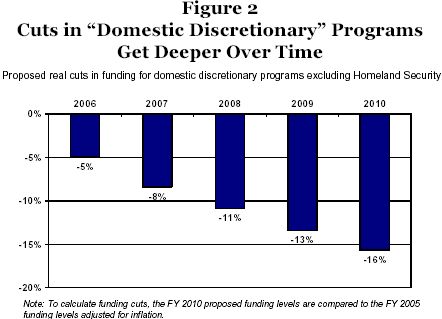 In short, the Administration proposes to write into law caps at these levels of discretionary funding without showing the public and Members of Congress how it would achieve the cuts that the caps would require.

Domestic discretionary programs have contributed little to the recent return to deficits.

In 2005, domestic discretionary programs will constitute 3.0 percent of the economy (as measured by the Gross Domestic Product). This is in line with the levels over the past 15 years. Under the President’s budget proposal, by 2010, domestic discretionary spending as a share of the economy would fall by more than one-fourth, reaching its lowest level as a share of the economy since 1962 or earlier, which was before the federal government began to make significant investments in K-12 education or environmental protection.

Few Areas Within Each Budget “Function” Would Be Immune from Cuts

The backup materials provide enough information to determine not only the cuts in each broad budget “function,” but also the cuts for sub-categories of programs within each function. The data in the backup budget materials show that few areas within these broad budget functions would be immune from cuts.

Are the Cuts by Program Area Just the Result of a Formula?

Last year, the Administration claimed that it had not made any decisions about cuts in specific discretionary programs for years after 2005. This claim, however, was called into question by Office of Management and Budget computer runs that accompanied the fiscal year 2005 budget and showed account-level spending plans — that is, spending on particular programs — through 2009. When confronted by this information, the Administration said that the spending levels specified in the computer runs were merely “formulaic” and had no significance, but a memorandum from OMB to federal departments and agencies indicated otherwise.* As The Washington Post reported last May, the OMB memorandum directed agencies to include widespread funding cuts in the fiscal year 2006 budgets that they were to submit to OMB last summer. The memo specifically directed agency heads to adhere to the funding levels contained in the OMB computer runs from the 2005 budget. The memo told agency heads that if they wanted to propose a higher level of funding for a budget account than the amount shown in the OMB computer run, they would have to offset the increase by proposing deeper cuts in other budget accounts within their agency.**

This year, OMB excluded from the computer runs accompanying the fiscal year 2006 budget any information about specific discretionary programs for years after 2006. But data provided in those runs about total spending and mandatory spending by budget function and subfunction for 2007 through 2010 allows the calculation of the level of discretionary spending assumed in the budget by function and subfunction in 2007 through 2010. Those calculated amounts form the basis for the analysis in this paper.

The Administration may once again claim that the amounts assumed in the budget that are derived by this calculation are simply “formulaic” and do not represent any policy decisions. The amounts, however, do not appear to follow any discernable formula. For instance, discretionary funding for the Natural Resources and Environment function (function 300) decreases by 2 percent (in nominal terms) between 2006 and 2010, but funding for General Science, Space, and Technology (function 250) grows by 5.8 percent. Even within a single function, the path of spending varies. Funding for Conduct of Foreign Affairs (subfunction 153) declines by 4 percent between 2006 and 2010 while funding for International Development and Humanitarian Assistance (subfunction 151) grows by 18 percent. Perhaps most tellingly, funding for Other Advancement of Commerce (subfunction 376) suddenly more than doubles (from $3.4 billion to $7.3 billion) between 2009 and 2010, presumably to accommodate the increased funding needed by the Census Bureau to carry out the 2010 census. It is hard to imagine a formula that could produce this result.

It also should be noted that the part of the budget that would be reduced $214 billion over five years includes programs outside of the Defense Department that are considered part of the defense budget function, such as atomic energy programs of the Energy Department. The OMB documents provide budget details in a way that necessitates such an approach.

* https://www.cbpp.org/sites/default/files/atoms/files/2-15-05bud.xls the spreadsheet which provides all the backup data for our calculations of policy changes in discretionary funding by various program areas.

David Kamin is Professor of Law at New York University School of Law.

Kamin was a Research Assistant with the Center from 2003 through July 2005. Kamin's focus was on federal tax and budget policy, especially with regards to the cost and impact of federal tax bills. Kamin graduated from Swarthmore College with a B.A. in Economics and Political Science. Prior to joining the Center, he worked as a Research Associate at the Committee for Economic Development focusing on federal budget policy.