Rep. Jeb Hensarling (R-Tex.) and a number of co-sponsors have introduced budget legislation, H.R. 2290, to make an array of major changes in budget rules and procedures, including the establishment of austere caps on annual appropriations for non-defense discretionary programs (i.e., non-defense programs that are not entitlements). The caps would require deep cuts in domestic and international discretionary programs, totaling $738 billion over the ten-year period from 2007 through 2016.

How the Caps Would Work, and Why They Would Result In Sharply Divergent Treatment of Defense and Non-defense Programs

In other words, non-defense programs could be cut even more deeply to benefit the defense budget, but defense funding could not be reduced to moderate the severity of the domestic program cuts. This also means that defense would be essentially guaranteed to receive funding at levels at least equal to the difference between the overall discretionary cap and the non-defense discretionary cap. The Hensarling bill sets the caps at levels that would assure that defense funding over the coming decade is approximately 10 percent greater than current defense funding adjusted for inflation, even if no domestic amounts are diverted to defense. (This calculation treats the cost of Afghanistan, and the international war on terror as outside the caps, and in fact the Hensarling bill establishes a mechanism whereby such funding can be, and is expected to be, treated outside the regular budget process.)

The President’s budget and the Hensarling bill diverge for the years after 2010. The President’s budget covers only the next five years, while the Hensarling caps would run through 2016. Those caps would require steadily deepening cuts over this period. By 2016, overall funding for non-defense discretionary programs would be cut by 25.4 percent, or one-fourth. In dollar terms, the cut in 2016 alone would amount to $133 billion. Over the ten-year period from 2007 through 2016, the cuts in funding for non-defense discretionary programs would total $738 billion.

To get a sense of how severe such cuts would be, we examine what would happen if a 25.4 percent cut were applied to this year’s appropriations. A cut of this magnitude would have reduced funding in 2005 by $20 billion for education and training programs, by $7.3 billion for veterans’ medical care, and by $2.1 billion for pollution control and abatement. It would have decreased the budget of the National Institutes of Health by $7.3 billion and cut funding for NASA by $4.1 billion. Head Start and other children and families services programs would have been cut by $2.2 billion, and low-income housing programs by $7.4 billion. It also would have meant the loss of Pell grants for 1.4 million students, and terminated 2 million low-income women and young children at nutritional risk from the WIC program. 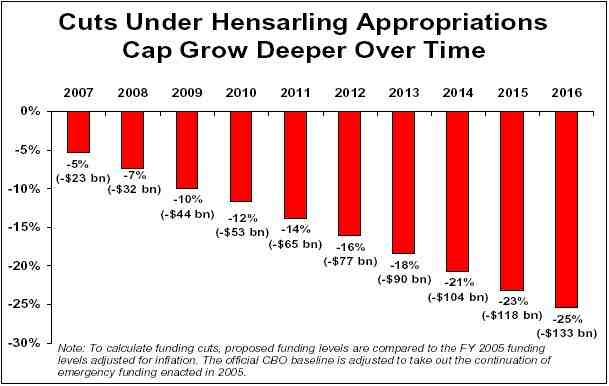 The Hensarling proposal differs markedly in scope and substance from the discretionary caps enacted in the past. The discretionary caps enacted in the early 1990s were part of carefully balanced deficit-reduction packages in which all parts of the budget were put on the table and there was broad, shared sacrifice. Those packages included increases in taxes, along with reductions in programs, with most of the tax increases being targeted on people who were the most well-off and could best afford to pay more.

As noted above, the caps of the 1990s also were accompanied by “pay-as-you-go” rules that required both entitlement expansions and tax cuts to be offset fully, thereby ensuring that the savings from the discretionary caps would be devoted solely to deficit reduction. In addition, the discretionary caps enacted in the early 1990s were the product of extensive negotiations with appropriators and were designed to represent achievable (and hence enforceable) policy goals. The Hensarling caps are different: they seek to impose budgetary limits in a one-sided manner that asks for sharply disproportionate sacrifice from the domestic discretionary component of the budget.

The Hensarling caps are part of a larger bill that Rep. Hensarling and his co-sponsors have introduced to make sweeping changes in budget rules. For example, the bill also includes an entitlement cap that would require cuts of more than $2 trillion over ten years in entitlement programs other than Social Security. Nowhere in the legislation, however, is there any limit or any form of budget discipline placed on tax cuts. Unlimited new tax cuts would be allowed. Indeed, the bill would change Senate rules so that permanent tax cuts would be easier to pass.[1] This underscores the risk that the deep budget cuts required by the appropriations caps could result in even larger future tax cuts, with little or no deficit reduction occurring.

Finally, the Hensarling proposal covers a much longer time frame than earlier discretionary caps. This calls further into question the enforceability of the proposed caps. The Budget Enforcement Act of 1990 established five-year discretionary caps, which then were extended in 1993. The caps were extended again in 1997, but the increased severity of those caps led to widespread noncompliance with them, and they were effectively disregarded. Given the unprecedented severity of the caps in the Hensarling proposal, which would require much deeper cuts than those that the ultimately unenforceable 1997 caps would have necessitated, the Hensarling caps could become increasingly difficult to enforce as time passed.

[1] The Hensarling bill includes the repeal of the Senate rule that bars budget reconciliation bills from increasing deficits in years beyond the years that the reconciliation directive covers. This rule is a central reason why the 2001 reconciliation legislation had to include sunsets on its tax cuts, rather than making them permanent.