A strong state economy requires high-quality public services like schools, public colleges and universities, and well-maintained infrastructure, among other services.  Businesses need well-educated, healthy, and qualified workers.  They need convenient and well-functioning roads, bridges, and ports.   And they’re more likely to locate in places with a good quality of life that includes publicly financed amenities like parks and libraries.

Nevertheless, some states are considering adding or tightening restrictions on the growth of state expenditures — through either amending their constitutions or enacting statutes — that could make adequate public investments impossible.  These restrictions can hurt a state’s ability to provide necessary services to its residents and businesses, putting at risk long-term growth and broadly shared prosperity.  That’s because tight expenditure limits can:

Tight expenditure growth limits, such as those that specify a restrictive percentage growth each year or those that base growth on a formula of inflation and population growth, can result in the deterioration over time of needed public programs and services.

For example, if health care costs grow faster than the limit formula would allow total expenditures to rise, then policymakers would have to cut either health programs or some other part of the budget.  This is likely to occur year after year, forcing increasingly deep cuts in critical programs.  Such limits also may not allow states to adequately fund their outstanding pension liabilities, or to meet other needs when costs grow in some areas above the limit, squeezing the remaining portions of the budget.

Hinder a State’s Recovery from Recession

When the expenditure limit for a given year is calculated by applying a growth factor to the previous year’s spending, recession-induced spending reductions can affect a state’s ability to provide adequate services for several years after the recession ends.  Consider a situation in which revenue dropped 12 percent during the recession and spending was reduced a similar amount to balance the state budget.  If a formula of inflation plus population growth allowed expenditure growth of 3 percent per year after the end of the recession, it would take nearly four years just to reach the pre-recession expenditure level.  This puts a state permanently behind in meeting needs.  Often called a “ratchet,” this is a particularly constraining feature of an expenditure limit. 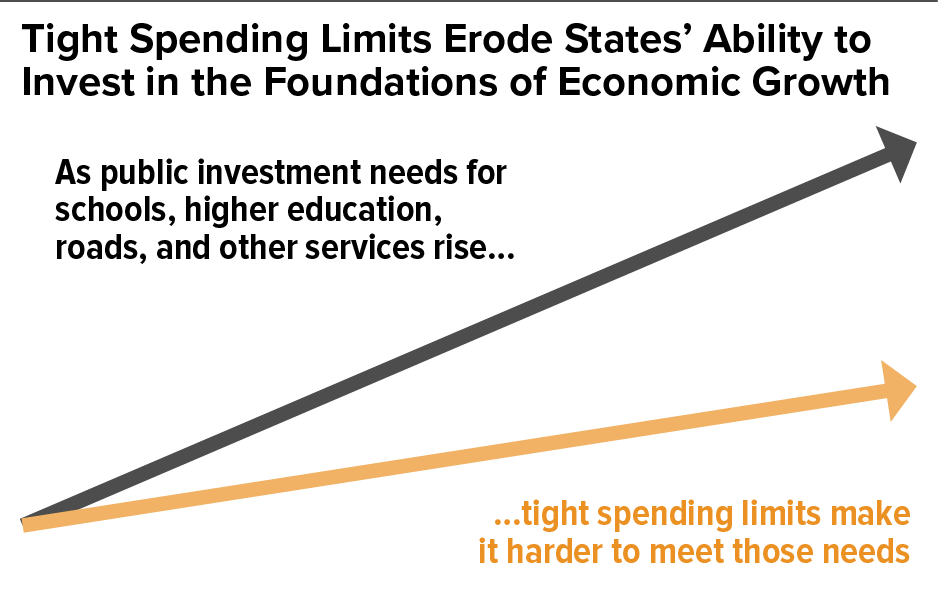 Impede Investments in the State’s Economy

Strong state economies rely on investments in physical and human capital, and expenditure limits put both at risk.  Tight funding is likely to affect the quality of both K-12 education and higher education, as well as investments in the health of the population.  Many studies show that the quality of a state’s workforce and its infrastructure are key factors in attracting businesses.

Voters expect lawmakers to make thoughtful decisions about how to meet the needs of state residences and businesses, but expenditure limits set through a formula can allow elected officials to avoid responsibility for the outcomes those limits cause.  If programs are cut, they can claim that constrained funding forced the decision.  In addition, expenditure limits often reduce transparency by encouraging lawmakers to move programs to portions of the budget to which the limit doesn’t apply, or to provide programs or services through tax credits rather than through the normal budget process, where they would receive regular scrutiny.

Enacting strict expenditure limits can also constrain elected officials’ ability to respond to unusual circumstances or emergencies.  At a time when threats may come from a national financial meltdown, a terrorist action, an epidemic, a weather event, or something else, it is important to preserve the flexibility to respond in a timely way that protects state residents.