Home / RESEARCH / State Budget and Tax / How Much Would Each...

How Much Would Each State Receive Through the Coronavirus State Fiscal Relief Fund in the Heroes Act?

State revenues have plummeted due to COVID-19. On May 15, the House of Representatives passed economic stimulus legislation — known as the Heroes Act — that includes significant new resources to help states avoid mass layoffs of teachers, health care workers, first responders, and others, as well as desperately needed fiscal relief for tribes and U.S. territories. The Heroes Act’s primary form of fiscal aid for states is a Coronavirus State Fiscal Relief Fund, which provides $540 billion in grants to states, tribes, and territories to counteract the virus’ impact on state and tribal finances, and avoid mass layoffs, extended furloughs, and other harmful cuts that would make a bad economy even worse.

As a result, states face massive budget shortfalls of about $765 billion for the current fiscal year (which ends June 30 in most states) and the next two. Even after subtracting flexible federal aid provided so far and the entire amount in state rainy day funds, states still face shortfalls of about $600 billion. Further, these shortfall estimates do not include increased state costs due to the pandemic, such as increased costs for public hospitals, first responders, domestic abuse agencies, mental health departments, and others (though the federal government has provided funds that will cover at least a portion of these costs through December 30, 2020).

Under the Heroes Act, states would receive $500 billion; another $20 billion would go to tribes and another $20 billion to the territories. The state funds would be distributed in two equal parts: $250 billion to be distributed within 30 days of the bill’s enactment and the remaining $250 billion by May 3, 2021. The funds for tribes and territories would be distributed in full within 30 days of enactment, an appropriate approach since, for example, the pandemic has hit Puerto Rico in the aftermath of two devastating hurricanes, an earthquake, and a severe financial crisis. Tribes are also uniquely vulnerable to the pandemic and its economic impacts since tribal businesses that have been deeply affected by the virus and downturn, such as casinos, often generate vital government revenue for tribes to run programs such as public health and child care.

The bill specifies that states, tribes, and territories may use these funds to avoid layoffs and other harmful spending cuts that otherwise would result from revenue declines caused by the pandemic. The bill also specifies that states may use federal funds provided under the CARES Act for these purposes, a necessary fix because Treasury Department guidance prevents states from using those funds to make up for lost revenues.

State allocations of the Heroes Act’s Coronavirus State Fiscal Relief Fund would be determined as follows:

Distribution of $250 billion within 30 days of enactment:

The Heroes Act also includes other types of fiscal relief. For example, the Act:

b The U.S. territories of Puerto Rico, Guam, the Virgin Islands, the Northern Mariana Islands, and American Samoa would split a $20 billion allocation. Half of these funds would be distributed equally to the five territories, so each receives $2 billion. The other half would be distributed based on each territory’s share of the total population of the five territories combined. Because Puerto Rico is much more populous than the others, it would receive most of these funds.

Source: CBPP estimates using Census population data for 2019, COVID case data from CDC as of May 15, and data on average unemployed individuals in the first quarter of 2020 from the Bureau of Labor Statistics 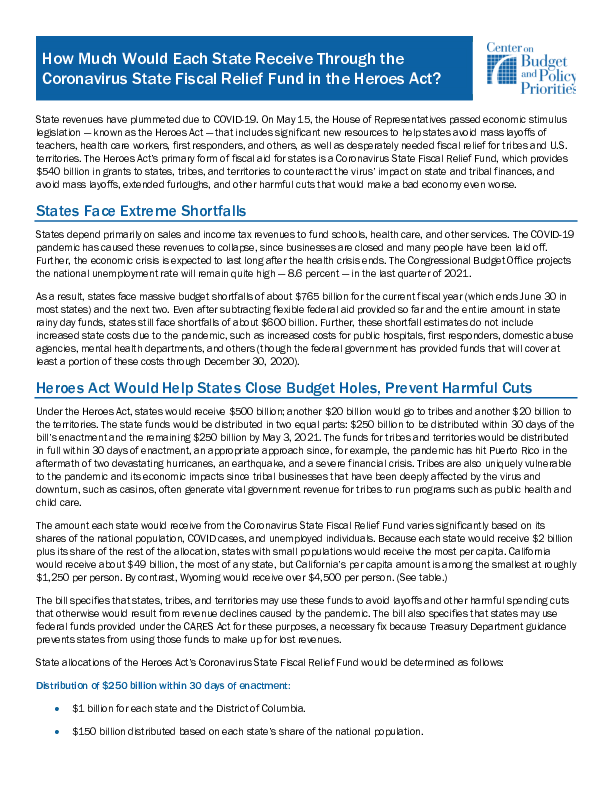