| By Michael Leachman and Michael Mazerov

Antiquated sales taxes are hindering states’ ability to strengthen their economies.  As they emerge from the recession and look to compete in a 21st century economy, many states are recognizing the urgent need to invest in highly competitive education systems, modern transportation networks, and a range of other innovative public initiatives that will form a strong foundation for future economic growth.  But states won’t be able to make these investments and sustain them over time without modern revenue systems that can raise adequate revenue as today’s economy expands.  A key step to doing so is to modernize their sales taxes, which account for nearly a third of the tax revenue states collect.

Most state sales taxes are ill-suited to raising adequate revenue in a 21st century economy because states have not kept pace with trends such as the growth of the service sector and of e-commerce. To keep revenue steady as a share of income, states have raised sales tax rates repeatedly.  The median state sales tax rate is almost twice as high now as it was in 1970.

States can modernize their sales taxes by:

States that take these steps will raise revenue they can use to invest in needed public services and, when appropriate, to lower sales tax rates.

States that broaden their sales tax will need to address two important issues.  First, a broadened sales tax base will tend to hit lower-income households harder than higher-income households, like any consumption tax.  Second, it is likely that even a broader sales tax will not cover the whole economy.  For both those reasons, it will be even more important with a broadened sales tax to have a robust graduated-rate income tax, which can cover a broader range of economic activity and which reflects more accurately a taxpayer’s ability to pay.

Strengths and Weaknesses of Sales Taxes 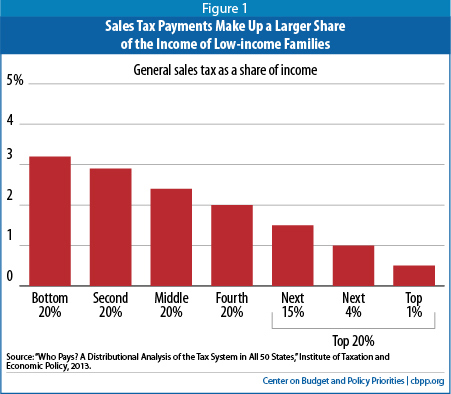 General sales taxes, along with personal income taxes and property taxes, are the three major sources of revenue for states and localities in the United States, and all three play important roles.  While sales taxes don’t grow with the economy as well as personal income taxes do over the long term, they also tend to decline less than income taxes when a recession hits.  During recessions, income tax revenues fall as people lose their jobs or see their hours cut; sales tax revenues decline too (since people consume fewer taxable goods and services when their incomes drop), but usually not as sharply.

As such, including sales taxes in the mix of state taxes is somewhat like having a diversified portfolio of investments.  In combination with faster-growing but somewhat more volatile income taxes (and other revenue sources), they can help states raise adequate revenue that remains relatively stable during good times and bad.

States should not rely too heavily on sales taxes, however, for two major reasons.  First, if they do, revenues won’t keep up with the state’s needs over time.  States generally need strong income taxes with graduated rates to produce revenue that keeps up with the needs of their residents and the demands of a growing economy.  When states substantially weaken their income tax systems in favor of sales taxes, their revenue grows too slowly, forcing them to either cut state services or repeatedly raise sales tax rates, property taxes, or other revenue to keep up.

Second, states that rely too heavily on sales taxes have revenue systems that heavily burden lower-income residents, making it harder for them to work their way into the middle class.  Low-income people pay much more of their income in sales taxes than higher-income people do because they must spend a very large share of their income to meet basic needs (see Figure 1).

States established their sales taxes decades ago, and most have not modernized them to reflect changes in what and how people buy.  To raise adequate revenue in today’s economy, states should take these four steps:

1. Broaden the Sales Tax Base to Include More Services.

Most states get most of their sales tax revenues from the purchase of goods, but the economy is increasingly service-driven. Nearly half (45 percent) of total household purchases went for services in 2011, up from 30 percent in 1970 (see Figure 2).[2]   Yet only a few states apply their sales taxes to a broad array of services; most states tax less than one-third of 168 potentially taxable services, according to the Federation of Tax Administrators.[3]   As a result, states lose billions of dollars each year, and the loss will likely grow as the trend toward services continues.  Every state with a sales tax except Hawaii, New Mexico, and South Dakota ¾ states that already have a very broad sales tax ¾ could raise additional revenue by extending the tax to more services.  States that tax few if any services — such as California, Illinois, Massachusetts, and Virginia — likely could boost their sales tax revenue by more than one-third if they taxed all services that households purchase.[4]

State sales taxes also have been weakened by the rapid growth of Internet commerce, in part because of legal limitations on state’s ability to collect taxes from online sales.  The U.S. Supreme Court ruled in 1992 that states cannot require merchants to collect sales taxes to residents of states in which the merchant lacks a “physical presence.”  (Buyers are legally obligated to pay the sales taxes directly to their states when the seller doesn’t collect them, but very few do.)  As a result, states and localities lose more than $20 billion a year in uncollected sales taxes, a figure likely to continue rising as e-commerce grows.[5]

Congress could resolve the problem by allowing states to collect sales taxes from large Internet retailers, as under the proposed Marketplace Fairness Act, which the U.S. Senate passed in early 2013.  But it has not yet done so.

In the absence of federal action, states can chip away at the problem on their own.  For example, in 2008 New York enacted a law requiring online companies with marketing partners known as “affiliates” in the state (such as Amazon and Overstock) to collect sales tax on all sales in New York.[6]   Affiliates are businesses and nonprofits that link to an Internet retailer from their site and receive a commission when readers click on the link and then make a purchase at the retailer’s online store.  The New York law asserts that online merchants with affiliates meet the “physical presence” requirement, an assertion that the state’s highest court upheld earlier this year.

The New York law only partially solves the problem of interstate sales that escape taxation.  Some Internet retailers don’t operate affiliate programs; some others have responded to these laws by terminating their programs in states that enact Amazon laws rather than collect sales taxes.  Until Congress addresses the problem comprehensively, more states could strengthen their sales taxes by emulating New York’s law.

State sales tax laws were enacted before the Internet existed, so it’s not surprising that the taxes often fail to make sense in today’s economy.  Twenty-three states have not updated their sales taxes to cover various goods and services sold and delivered on the Internet — computer software, music, movies, games, and books, for example — even though these states tax the sale of identical items sold in physical stores.[7]   (See Table 1.)  This failure costs states on the order of $300 million each year.[8]

A few states are leading the way in modernizing their taxation of digital goods and services.  These states, including Idaho, Utah, and Washington, not only tax downloaded movies, music, or books (the digital goods most states are now taxing), but other digital goods as well.

States also could modernize their sales taxes by closing a loophole that allows online travel companies to avoid collecting the full tax due on hotel room bookings even though states collect the tax when travel agents or travelers themselves book the same room.  Forty-two states have failed to close this loophole.

Taxes on hotel room rentals are an important state and local revenue source to fund schools, roads, public safety, and other infrastructure.  Every state except Alaska, California, and Nevada taxes hotel room rentals, as do thousands of cities and counties in nearly every state (the exceptions are Connecticut, Delaware, Hawaii, Maine, and New Hampshire).  Hotels collect the taxes, which consist of general sales taxes and excise taxes (often called “lodging taxes”), from the occupant and remit them to the state and locality.

Online travel companies like Expedia, Orbitz, and Priceline, however, typically remit the applicable sales and lodging taxes only on the “wholesale” room rate they pay hotels for the right to rent the rooms, not the higher “retail” room rate they actually charge renters.  They argue that this practice, which costs states and localities roughly $275 million to $400 million in revenue each year,[9] fulfils their legal obligation to collect tax.

In reality, there is no tax policy justification whatsoever for this practice.  States routinely tax the full retail price charged to consumers for other types of sales transactions executed by intermediaries analogous to the online travel companies.

States and localities that tax hotel room rentals should take appropriate steps to ensure that the full retail room charge is taxed when the room is booked through an online company — just as it is when the room is booked by a conventional travel agent or the renter herself.  For example, they might initiate lawsuits to enforce payment of the tax on the online companies’ retail room charges.  Or, if states and localities believe their laws do not clearly mandate collection based on the retail amount, they may need to modernize their laws.  The Multistate Tax Commission — an organization of state governments working on tax laws that apply to multistate enterprises — recently drafted a model law to address the problem.[10]

States can strengthen their ability to compete in the 21st century economy by investing in more modern education systems, transportation networks, and other high-quality public services.  To make these investments and sustain them over time, states will need to update their antiquated sales taxes, which are stuck in an era before the Internet and before services became so important to the economy.  States should take four steps:  expanding their sales tax to include more services, enacting an “Amazon law,” extending the sales tax to Internet downloads, and closing a loophole that allows online travel companies to avoid paying the full amount of tax due on hotel room bookings.

[1] Institute on Taxation and Economic Policy, “Who Pays? A Distributional Analysis of the Tax Systems in All 50 States,” 4th edition, January 2013, http://www.itepnet.org/whopays.htm.

[7] The other 27 states and the District of Columbia apply the sales tax to some downloaded items -- movies, music, and/or books. A few of these states, including Idaho, Utah, and Washington, tax other digital goods as well.